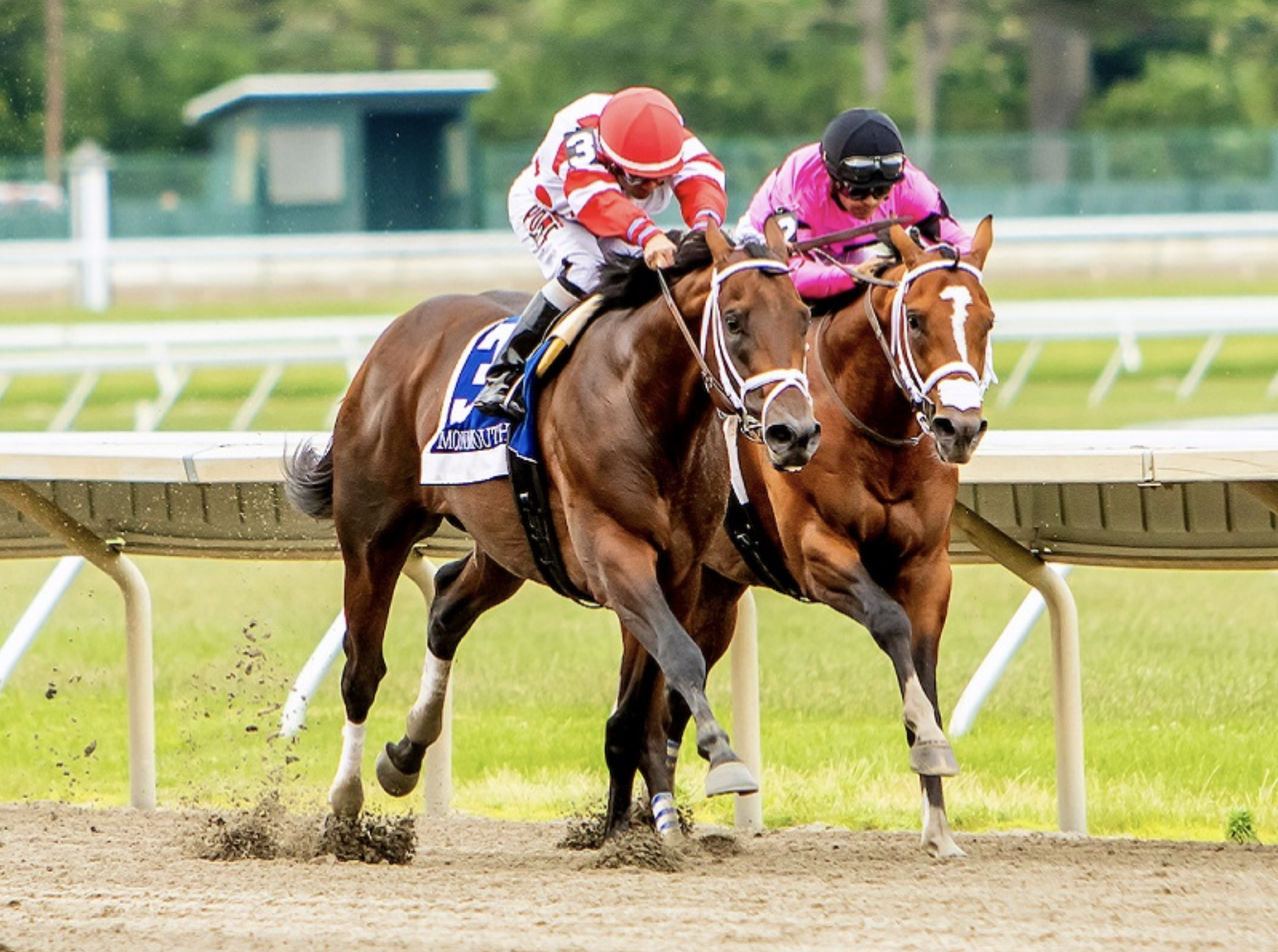 The Grade I Haskell Invitational at Monmouth Park this Saturday will be the first of three events during the second half of 2019 that figure to play a significant role in terms of who will get the Eclipse Award as champion 3-year-old male.

After the 1 1/8-mile Haskell, the other two biggies still to be run in the 3-year-old male division will be Saratoga’s Grade I Travers Stakes at 1 1/4 miles on Aug. 24 and Parx Racing’s Grade I Pennsylvania Derby at 1 1/8 miles on Sept. 21.

The Haskell, Travers and Pennsylvania Derby take on added importance this year due to a different horse winning each of the Triple Crown races during the spring. Country House won the Grade I Kentucky Derby on May 4 in a 65-1 upset through the disqualification of Maximum Security. War of Will took the Grade I Preakness on May 18 at 6-1 in the wagering. Sir Winston won the Grade I Belmont on June 8 at 10-1.

Country House got sick after the Kentucky Derby and will not race again this year, according to Hall of Fame trainer Bill Mott.

War of Will worked five furlongs in a sharp 1:00.40 last Saturday at Saratoga when he galloped out with verve for trainer Mark Casse. War of Will is scheduled to make his next start in Saratoga’s Grade II Jim Dandy Stakes at 1 1/8 miles on July 27.

Sir Winston, also trained by Casse, is out until later in the year. An injury to Sir Winston’s left front ankle is the reason for the delay in the return to competition, according to Casse.

Here are my selections:

I think Maximum Security has an excellent chance to resume his winning ways after finishing second as a 1-20 favorite in Monmouth’s 1 1/16-mile Pegasus Stakes on June 16. The Kentucky-bred New Year’s Day colt stumbled at the start that day and ended up one length behind 5-1 King for a Day.

In upper stretch, it did appear for an instant that Maximum Security was going to edge away from King for a Day. But King for a Day just would not go away.

King for a Day then had the needed response in the final sixteenth to prevail by one length in 1:42.59. He was credited with a career-best 102 Beyer Speed Figure. His previous top Beyer was the 85 he recorded when he won Pimlico’s 1 1/16-mile Sir Barton Stakes by 2 1/2 lengths on May 18 in his 2019 debut.

Prior to the Pegasus, Maximum Security finished first in each of his five career starts. His only defeat during that sequence came when the stewards disqualified him in the Kentucky Derby. After Maximum Security prevailed by 1 3/4 lengths in the 1 1/4-mile classic, he was disqualified and placed 17th for committing a foul when he veered out sharply nearing the five-sixteenths marker to cause interference to War of Will, Bodexpress and Long Range Toddy.

It was the first time in the 145-year history of the Kentucky Derby that a winner was disqualified for an incident during the running of the race.

Prior to the Run for the Roses, Maximum Security reeled off four straight victories at Gulfstream Park by a combined 38 lengths from Dec. 20 to March 30. In his final race prior to the Kentucky Derby, he won the Grade I Xpressbet Florida Derby by 3 1/2 lengths at 1 1/8 miles on March 30.

Mucho Gusto is coming off back-to-back victories in Grade III races at Santa Anita. He won the seven-furlong Lazaro Barrera by 3 1/4 lengths on May 18, followed by a 2 1/4-length triumph in the 1 1/16-mile Affirmed on June 16.

One of the primary reasons I’m picking Maximum Security to win the Haskell is his Beyer power. He’s reeled off four consecutive triple-digit figures (102, 101, 101, 100) going into Saturday’s race.

Mucho Gusto has yet to record a Beyer higher than a 95. Thus, he likely will need to show improvement in order to win the Haskell. But I do think that could happen. I really liked the way the Kentucky-bred Mucho Macho Man colt rated beautifully in fourth early in his Affirmed triumph when Roadster was the runner-up. Earlier in the year, Roadster had captured the Grade I Santa Anita Derby.

While Baffert is giving Mucho Gusto a chance to step up and win a Grade I race this Saturday in New Jersey, I did find it interesting that the white-haired conditioner recently indicated that he feels his best 3-year-old male at this time is Game Winner.

Earlier this month, the BloodHorse’s Lenny Shulman asked Baffert for his thoughts as to the pecking order of the nation’s top 3-year-old males heading into the second half of the year.

“I’d have to put the real Derby winner [Maximum Security] first,” Baffert said. “I think Game Winner is in the top three. He just went off form, but I think I can get him back. He’s going in the Los Al Derby as a prep for the Travers. Oh, and Mandella’s horse [Omaha Beach]. I forgot about him. Maybe you put him second when he comes back. I don’t know.”

Baffert’s comment early this month that he believed he could get Game Winner back into winning form was prescient in that last year’s Eclipse Award-winning 2-year-old male won the Grade III Los Alamitos Derby at 1 1/8 miles last Saturday. Game Winner prevailed by five emphatic lengths as a 1-20 favorite.

Gary and Mary West own both Maximum Security and Game Winner.

The BloodHorse’s Bob Ehalt quoted Gary West this week that he was “really happy” with Game Winner’s performance in the Los Al Derby.

“We wanted him to have a good race without having to work overly hard for it,” West said. “Sometimes you get what you want and sometimes you don’t. In this case we got exactly what we wanted out of it. He ran a good race and ran the last eighth of a mile in less than 12 seconds [11.85] and that’s pretty unusual for a 3-year-old going a mile and an eighth. I thought that was real encouraging and he was drawing off pretty rapidly at the end of the race. He finished real strong. He came back and wasn’t blowing and I think that race will set him up real well for the Travers.”

Two years ago, Baffert sent out West Coast to take the Los Al Derby by 2 3/4 lengths for the Wests. The Flatter colt then won the Travers by 3 1/4 lengths.

West Coast recorded a 100 Beyer Speed Figure in the Los Al Derby. He registered a 108 Beyer in the Travers.

Game Winner posted a 96 Beyer in the Los Al Derby.

WILL KING FOR A DAY RULE AGAIN?

The other major player in the Haskell is King for a Day. Can he extend his winning streak to three this Saturday? It is a distinct possibility.

Back on June 16, I was a guest with Joe Withee and Rob Rao on The Win Place Show, a radio program heard on Seattle’s KJR-AM. That morning I warned everyone to watch out for King for a Day in the Pegasus.

I had heard from a reliable source last fall that trainer Todd Pletcher was very high on King for a Day. That was just before the Kentucky-bred Uncle Mo colt ran in the Grade II Kentucky Jockey Club Stakes at Churchill Downs on Nov. 24. I was told that Pletcher considered King for a Day to be one of his best 2-year-old colts, maybe even his best chance for the Kentucky Derby.

King for a Day finished fourth in the 1 1/16-mile Kentucky Jockey Club. He lost by two lengths at odds of 9-2. He then went on the shelf. He didn’t race again until May 18.

On May 18, King for a Day won the Sir Barton as a 2-5 favorite. He subsequently upset Maximum Security in the Pegasus.

King for a Day recorded a 93 Beyer Speed Figure in the Sir Barton. He did a whole lot better in the Beyer department when he won the Pegaus, an effort that produced a career-best 102.

In terms of this Saturday’s Haskell, I will be shocked if someone other than Maximum Security, Mucho Gusto or King for a Day wins.

Grade I winner Omaha Beach, who had to miss the Kentucky Derby due to an entrapped epiglottis, currently is in training at Del Mar with Hall of Fame trainer Richard Mandella.

Omaha Beach was installed as the 4-1 morning-line favorite for the Kentucky Derby after winning the Grade I Arkansas Derby at Oaklawn Park. But he was withdrawn from the Run for the Roses due to an entrapped epiglottis that required surgery.

Mandella has indicated that Omaha Beach will have a workout soon. Mandella was quoted as saying “there is a chance” that the Kentucky-bred War Front colt could return to competition in Del Mar’s Shared Belief Stakes at one mile on Aug. 25, “if it works out. We’ll see how it goes.”

A start in the Shared Belief, if it were to happen, could conceivably serve as a springboard to the Grade I Pennsylvania Derby at 1 1/8 miles on Sept. 21.

Even though Omaha Beach was absent from all three Triple Crown events, he currently is ranked No. 1 among 3-year-old males in the Watchmaker Watch, the weekly divisional ratings by Mike Watchmaker, national handicapper for Daily Racing Form.

If Maximum Security wins the Haskell, look for him to move to the top of Watchmaker’s rankings next week.

It was with sadness that I learned the news that respected turf writer Bob Fortus passed away Tuesday morning in Baton Rouge, La.

Daily Racing Form’s Marcus Hersh reported that Fortus “died as a result of complications from injuries he sustained when he was struck by a car March 29 near his home in New Orleans.” He was 69.

Fortus was a longtime writer, handicapper and editor for the New Orleans Times-Picayune until the newspaper laid him off in 2012. His main beat, of course, was the Fair Grounds in New Orleans.

“He was a tireless reporter who, perhaps compensating for not having a background in journalism, was determined to uphold the profession’s highest standards,” Hersch wrote. “Fortus broke local stories and helped with investigative reporting, typically contacting many more sources than he could possibly use in order to establish a balanced point of view.”

I wish more reporters these days would take such an approach.

“Working the Times-Picayune desk,” Hersh added, “he was a meticulous and exacting editor who improved the copy of untold numbers of scribes passing through the sports department.”

In 2013, Fortus was honored with the National Turf Writers and Broadcasters’ Walter Haight Award for lifetime achievement.

One of Fortus’ closest friends was Gary West, not the Gary West who races Maximum Mischief and Game Winner, but the Gary West who is an award-winning turf writer. Fortus and West together in 2015 published “Ride to Win: An Inside Look at the Jockey’s Craft.”

I once asked Fortus which is correct, to say or write “the Fair Grounds” or just “Fair Grounds.” I thought he was the right person to ask since he had covered that track for so many years. I wanted to know what Fortus did as a writer when he mentioned the track.

I have never forgotten that.

I will also never forget Fortus’ wonderful sense of humor. Whenever our paths crossed, he never failed to make me laugh at least once.

During his time as a turf writer, Fortus typically covered the Super Derby at Louisiana Downs. But he had to miss the race in 2004 because of a conflict. He reached out to me to find out if I could fill in for him and write a recap of the race for the Times-Picayune. I was at the Super Derby that year as a broadcaster for HRTV.

I was able to pinch hit for Fortus at that 2004 Super Derby. And I was honored that he asked me to do so.