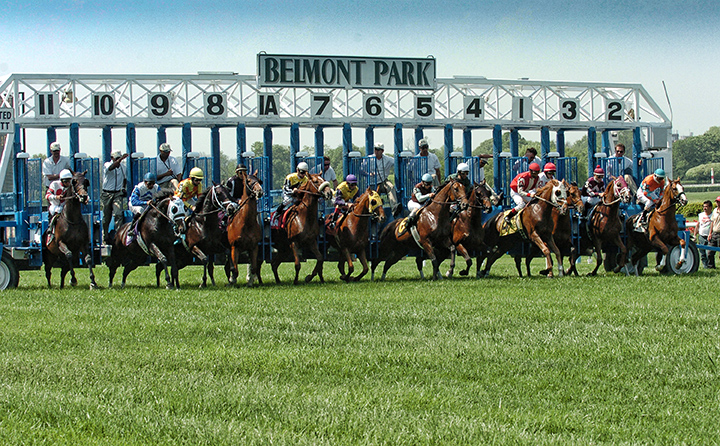 Forecast: The first few races on the Saturday Belmont Park program have the potential to be quite chalky.  Cash Offer is listed at 3/5 on the morning line in the opener, a state-bred first-level allowance sprint.  The M. Hennig-trained filly broke her maiden by more than 12 lengths when last seen over the Belmont Park main track while earning a career top speed figure, and a repeat of that effort three races back will be more than good enough to get her back on the winning track.  Duplicating her good second in her most recent outing in late July at Saratoga would be quite sufficient as well.  Let’s make her a no-value rolling exotic single but otherwise pass the race.

Forecast: ​Here’s another logical short-price favorite, Cape Code Diva, who shows up in a maiden claimer for the first time while landing F. Prat.  The M. Hennig-trained daughter of Data Link towers over this field on speed figures, but those were accomplished on grass and today she’s trying the main track for the first time.  However, if it’s not her, then who?  Most of these have been thoroughly exposed at this level and are dreadfully slow on figures.  In a race that probably should be left alone, we’ll make ‘Diva a no-value rolling exotic single.

Forecast: The main contention is drawn inside in this $40,000 claiming sprint at six and one-half furlongs on the main track.  Data Driven just won a $12,500 affair by almost 14 lengths with a stakes-quality speed figure at Saratoga and is being raised considerably on the claiming ladder in a sign of confidence in his first start for Rudy.  All three of his prior races over the Belmont Park were excellent (two wins and a second), so despite the ambitious class hike the veteran son of Northern Afleet will be a short price (6/5 on the morning line) to win right back.  Happy Farm was sharp in victory over a starter’s allowance ($25,000) field here in early July, but in typical J. Servis fashion shows only a couple of very slow workouts since.  Let’s proceed under the assumption that the Ghostzapper gelding will fire his best shot and be a major player.  We’ll prefer Data Driven on top but include both in our rolling exotics.

Forecast: Crypto Gold drops below his claiming price despite steadily rising speed figures and should be ready to graduate in this maiden claiming $40,000 grass router for older horses.  The son of Medaglia d’Oro actually finished first in a similar event over this course and distance in May but was disqualified, so he’s still trying to earn his diploma.  On a Spree will get plenty of play, deservedly so.  The lightly-raced son of Speightstown is competitive on numbers and just finished fourth in the same race Crypto Gold exits.  The K. McLaughlin-trained gelding switches to F. Alvarado, and with another forward move could get the money.  We’ll give Crypto Gold top billing but both should be used in your rolling exotics.

Forecast: ​The known element is okay (Hemlock, Unprecedented) but there are a couple of high potential first-time starters in this maiden juvenile extended sprint that deserve close scrutiny.  Democratic Values has done everything right in the morning for C. Brown and looks cranked up and ready to fire in his debut for a barn that does very well (21%) with first-time starters.  The son of Honor Code, a $475,000 yearling purchase, has been given an excellent foundation and looks fit and ready right now.  Alpha Sixty Six also has done some very good work in the a.m., and from his cozy outside post the son of Liam’s Map should have every chance to make his presence felt from right out of the box.  Of the two we’ll slightly prefer Democratic Values on top but both should be used in rolling exotic play.

Forecast: Tiple, improving with each outing, is fresh from a clever win for $32,000 at Saratoga, and is protected today in starter’s allowance company in her first off the claim for P. Serpe (good stats in a limited sample with this angle).  She also won her previous race over this course and distance vs maiden claimers with her deep closing style, and with another forward move should be dangerous again in the final furlong.  Odramark is a Monmouth Park shipper in excellent form with rising speed figures and is the likely choice and one to beat.  This six furlong trip will be the farthest she’s travelled but the extra distance shouldn’t be an issue for the Tapizar filly who can be tough on the front end or from a stalking position.  Both should be included in rolling exotic play; based on her 5-1 morning line we’ll give Tiple a very slight edge on top..

Forecast: Halladay is fast on numbers and lightly-raced with plenty of upside.  The War Front colt turns back from a mile to seven furlongs and comes from a barn that hits at a strong 22% with the route-to-sprint angle.  He’s reunited with “win rider” Johnny V., so we suspect the T. Pletcher-trained colt is prepared for a major effort in this first-level allowance turf dash. However, at 7/5 on the morning line, he won’t be offering much wagering value.  Mango M., at 6-1 on the morning line, probably is worth including on a ticket or two as a back-up.  The Tale of the Cat gelding will wear blinkers for the first time (Shug is excellent with this angle, 23%) and with three prior wins over the local lawn he’s a contender despite being a tad shy in the speed figure department.

Forecast: The 12-furlong main track Grand Prix American Jockey Club Invitational brings together familiar rivals.  Marconi won the Brooklyn Invitational-G2 over this track and distance in July but failed to stay a mile and three-quarters in the subsequent Birdstone Stakes and wound up a distant second.  He’s certainly capable of rebounding today.  Realm, third when beaten just a half-length in the Brooklyn and then a distant fourth when overmatched in the Suburban S.-G2 behind Preservationist, has a big look off his best race.  So, whose turn is it today?  We’ll use both in our rolling exotics while otherwise passing the race.

Forecast: ​European invaders fresh off the plane usually have an edge over their North American-based counterparts.  Love So Deep ran the best race of her career when tagged right on the line in the Prix de Pomme-G3 at Deauville three weeks ago and if she brings that form with her in her U.S. debut the Japanese-trained filly will be good enough to win this event.  She can handle any surface or distance, switches to top rider J. Spencer, and has the type if tactical speed that can adjust to any pace scenario.  Wonderment has yet to recapture her juvenile form that saw the Irish-bred filly take the Criterium de Saint-Cloud-G1 in her third and final start of her 2-year-old campaign, but the daughter of Camelot was beaten less than three lengths when seventh of 16 in the French Oaks-G1 two races back and then was given too much to do when sixth, beaten two lengths, in the Prix Minerve-G3 at Deauville last time out. She’s a first-time Lasix user and regular rider S. Pasquier makes the trip, so we’re expecting the best she has to offer from the N. Clement-trained filly.  Edisa, group-placed in her last pair and a listed stakes winner before that, ran better than the line will show when forced to take the overland route in the Prix de Psyche-G3 at Deauville in late July.  The daughter of Kitten’s Joy picks up F. Prat for her U.S. debut but will not race with Lasix.  Trainer A. Royer-Dupre doesn’t ship to the States too often but when he does he comes loaded. Of the three, Love So Deep is preferred so we’ll have extra tickets keying her on top both in the straight pool and in rolling exotic play.

Forecast: Here’s another race in which the European invaders look appealing.  Price players should take a very close look at San Huberto, an Irish-bred colt who may be considerably better than his morning line of 10-1.  The son of Speightstown gains F. Prat for his U.S. debut, will get Lasix, and is progressing rapidly based on his French form, having won two of his last three in strong fashion with rising Timeform ratings.  Spanish Mission arrives in peak form from England and arguably is the one to beat.  The 12-furlong trip fits him perfectly, and the son of Noble Mission, a Group-3 winner at Newmarket two races back and a narrow third in a similar affair at Goodwood last month, gets regular pilot J. Spencer and Lasix.  The best of the North American contingent would appear to be Digital Age, who rallied against the grain to finish a strong second in the Saratoga Derby Invitational while appearing to want more distance.  This will be his first start at a mini-marathon trip and we suspect he’ll move up at the trip.  We’ll include all three in our rolling exotics and then go with the best price – San Huberto – with extra tickets on top and in the straight pool.

Forecast: Champagne Chills just finished first in a maiden $40,000 claimer at Saratoga over a muddy track but was disqualified and placed second.  Today he drops in for $25,000, not exactly a sign of confidence for a lightly-raced New York bred, so at 8/5 on the morning line there’s not much value to be found, especially with the rail draw.  You have to use him in rolling exotic play but not really trust him.  Legion Star is a 13-race maiden coming off a pair of runner-up efforts at Saratoga at this level.  He’s hit the board in three of four prior starts over the Belmont Park main track, so he’ll probably run his race today but the evidence is mounting that he lacks a winning punch.  You can use these two, spread deeper, or simply pass.