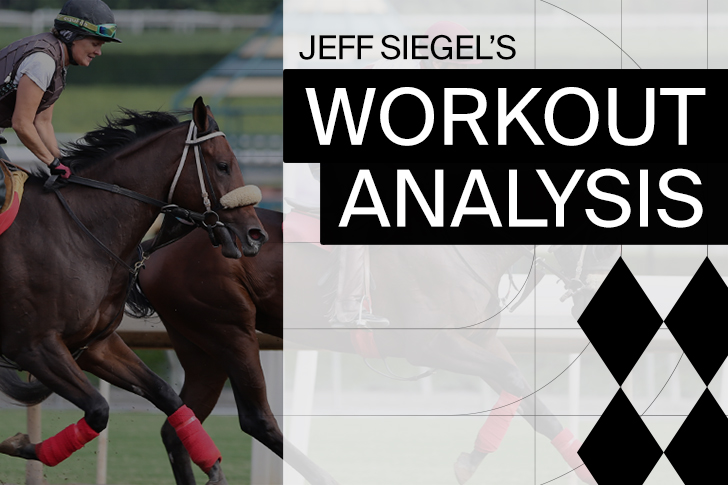 Breezing throughout and earning excellent time around the dogs on turf, plenty left while sharp and eager throughout. Moves much, much better on grass and should improve a ton with a switch in surface next time out. Dangerous at any distance.

Midnight Lute filly wore blinkers and drilled from the gate inside Censorship (same time) for B. Baffert, displaying sharp early speed under a hold and then finishing head-and-head when eased up at the 5/8ths pole, a few ticks slower on our watches than given but very nice nonetheless, splits of :23.2, :47.2 and 1:00 flat, stride for stride late with her more experienced barn mate. Has some quickness and appears to have some quality, should make the entries soon.

Into Mischief juvenile appears to have plenty of ability as he displayed in this team gate drill inside stable mate Goddess of Fire (same time), mild coaxing early and mostly on his own late to record quick clocking while clearly best. Gearing up for his debut and should make the entries soon, nice sort.

Gate drill inside stable mate Bellinger (4f, :47.2bg) nd was clearly best while mostly under wraps every step of the way, finishing about three lengths clear while displaying a smooth, athletic stride under mild coaxing only. Constitution colt brought $420,000 as a yearling and looks the part.

Unraced 2-year-old filly worked from gate with older Grade-1 winner Flagstaff (same time) and was much quicker early while leading by a few lengths after the opening quarter, was joined by workmate midway on the turn and was pretty much even thereafter (perhaps a neck back when pulled up), splits of :23 flat, :34.3, :47 flat and 1:00 flat, easy early, mild late coaxing. Street Boss filly was $360,000 OBS April Sale purchase and seems ready to roll for J. Sadler.

In blinkers, was along the rail working inside Marco Polo (4f, :47hg) and was always going the better of the two without really being asked much, then was coaxed just a bit in the final stages and responded impressively before galloping out a full six furlongs in 1:12.4 on our watches. Quality Road colt brought $600,00 as a yearling, has some speed but definitely wants to run long, hope he’ll debut in an elongated sprint or perhaps even two-turning. Looks plenty fit for Baffert.
*
*
*
*
Workouts through July 27, 2021

Unraced 3-year-old Quality Road colt brought $900,000 as a yearling and may finally be ready to face the starter based on this impressive gate drill while proving best over Gold Rush Candy (5f, :59.1hg) and Dubronik (4f, :48hg), always on his left lead but in front along the rail throughout, something left late without pressure, :46.2 and :59 flat on our watches. Turned in a series of fast works at Los Alamitos before joining the main string and should be more than fit enough by now.
*