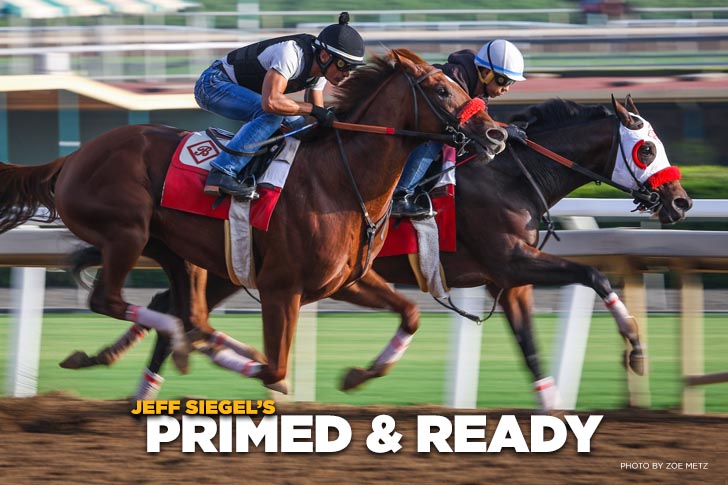 B. Baffert-trained juvenile filly was joined down the backstretch by the W. Spawr-trained Fast Lightning (5f, 1:01.1h) and left that one in the final furlong with an impressive display of late speed, then continued out full of run while coming from the 3/8ths pole to the 7/8ths pole in :47.1, very impressive. Daughter of Uncle Mo is a half-sister to California Chrome and moves like a filly of the highest quality.

In company inside Haughty (same time) and was always going the better of the two while under a nice hold throughout, able to go faster if permitted, plenty left late. Curlin filly from graded stakes winner Funny Proposition has quick action and should be a very live item first crack out of the box. Brought $670,00 at the OBS April and looks the part. Terrific prospect.

Daredevil filly worked outside Breakfast Ride (same time) in team gate drill and was a bit the best towards the end of the work, light coaxing only after going easily for the opening half. Was a $250,000 OBS purchase in April after previewing in a blistering 9 4/5 seconds. Not much family but is bred and built to win early and should make the entries soon.

Under wraps outside Handbelle (5f, 1:01.1b) for Pletcher and was clearly best to the wire and finishing with plenty left, quite sharp for juvenile daughter of Cupid. Debuted over a distance of ground on grass last month and led the way until tiring in the final furlong; will be much fitter next time, for sure.

Terrific work for Irish import while much best inside Classically (4f, :47.4hg), breezing throughout while displaying excellent speed and then galloping out five furlongs in :59.2 with plenty left. Been away for almost a year has all of her conditions, was a useful two year old overseas but should be a much better type for trainer who excels with these types of imports.

Strong, scopey, extremely attractive juvenile son of Lord Nelson was in company with Fannie and Freddie (same time) and was under a nice hold through the lane while able to go faster if permitted. Brought $310,00 at the OBS April sale despite a moderate bottom line and didn’t breeze particularly fast (10 2/5) but covers a lot of ground and should eventually show his best stuff over a middle distance.
*
*
*
*
Workouts through August 18, 2021

Unraced 2-year-old filly worked from gate with older Grade-1 winner Flagstaff (same time) and was much quicker early while leading by a few lengths after the opening quarter, was joined by workmate midway on the turn and was pretty much even thereafter (perhaps a neck back when pulled up), splits of :23 flat, :34.3, :47 flat and 1:00 flat, easy early, mild late coaxing. Street Boss filly was $360,000 OBS April Sale purchase and seems ready to roll for J. Sadler.
*
*
*
*
Workouts through July 27, 2021

Unraced 3-year-old Quality Road colt brought $900,000 as a yearling and may finally be ready to face the starter based on this impressive gate drill while proving best over Gold Rush Candy (5f, :59.1hg) and Dubronik (4f, :48hg), always on his left lead but in front along the rail throughout, something left late without pressure, :46.2 and :59 flat on our watches. Turned in a series of fast works at Los Alamitos before joining the main string and should be more than fit enough by now.
*
*