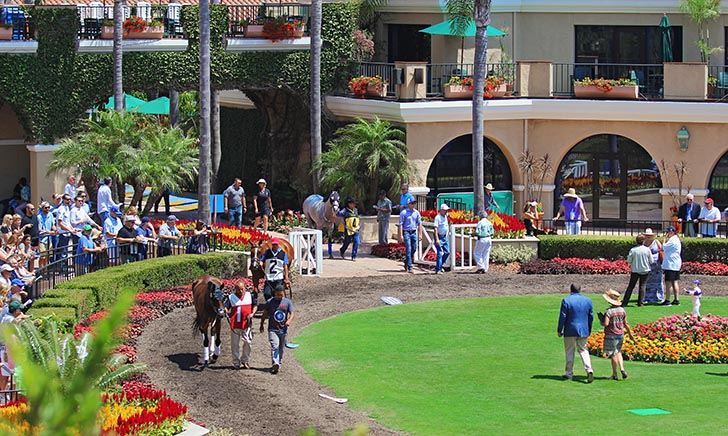 Forecast: The Friday opener is a competitive $40,000 turf claimer for older horses that offers several possibilities. We’ll go three deep with preference on top to First Premio, a first-off-the-claim play for C. Dollase. A veteran gelding with a touch of back class, he was taken for this same price last month out of a solid effort in which he closed with purpose but too late when third, beaten just over a length. A similar effort today puts him right there again. Dubby Dubbie is waiver protected in his first start in more than a year for the J. Sadler stable, whose record with layoff runners is quite solid. With F. Prat taking the call in a field without much speed, the veteran gelding projects to be on the lead, and he can take this field a long way if not pressured early. The work tab should have him fit enough and he’s won twice following vacations in the past. Secret Club is guaranteed a ground-saving trip from the rail, has numbers that fit, and should at least hit the board with clear sailing. He lacked a clear path in a state bred stakes last month but with better luck today he’ll have a reasonable look. “Win rider” J. J. Hernandez returns, another positive factor.
*
*
RACE 2: Post: 2:30 PT Grade: B
Use: 1-Zero Tolerance; 6-M Is for Magic

Forecast: Zero Tolerance was best when beaten in her debut as she overcame a poor start to rally furiously late but ran out of room when missing by a nose in a five furlong turf sprint earlier this month. She gets an extra furlong to work with today but drew the rail and must prove she can run as well on the main track. A nice gate work (4f, :47.4hg) last week should have her on edge. M Is for Magic always has trained well on dirt and today, in her ninth career start, she finally gets a chance to run on it. A better-than-looked fourth (beaten less than two lengths) in the same race Zero Tolerance exits in her first outing since December should serve as a springboard to a significant forward move. From her cozy outside post the P. Eurton-trained daughter of Magician is guaranteed a soft, stalking trip in a field without much speed. We’ll give Zero Tolerance a slight edge on top but include both in our rolling exotics.
*
*
RACE 3: Post: 3:00 PT Grade: B
Use: 1-Indian Peak; 5-North County Guy

Forecast: North County Guy lacked room at a critical stage midway around the far turn and did quite well thereafter to finish third in a state-bred stakes over this course and distance last month. In this softer spot with just four other entrants, the veteran gelding should be able to secure a good trip and regain his winning form. He receives a positive jockey switch to U. Rispoli, and from his outside draw and drop over and secure a comfortable early position. Indian Peak, second in the same race North County Guy exits while earning a career top speed figure, retains F. Prat and projects to be within range while saving ground throughout. He’s never been quite as good as our top pick but should make a strong run for it.
*
*
RACE 4: Post: 3:30 PT Grade: B+
Single: 2-Righteously

Forecast: Righteously, a thoroughly genuine and consistent filly, has won four of her last five starts, most recently capturing a mixed breed sprint at Los Alamitos in easy fashion. Not the soundest of runners- she was a voided claim three runs back up north but nevertheless always seems to show up on game day and most likely will settle in the second flight and then kick on when ready. This $25,000 claiming sprint restricted to 3-year-olds represents a slight raise in class, but the daughter of Square Eddie should be up to the task,. So we’ll make her a win play and rolling exotic single.
*
*
Race 5: Post: 4:00 PT Grade: B-
Use: 2-Gates of Heaven; 3-Vantage Point; 6-Man Friday

Forecast: Man Friday moves into the high percentage M. Maker barn following a $40,000 claim last month in which the son of American Pharoah was farther back than he prefers but finished strongly to gain second money while earning a career top speed figure. This one-level raise in class to the $50,000 level should be well within his capabilities, so with just a slight forward move he can recapture his winning ways. Gates of Heaven remains well above his claim price in a sign of confidence and will be stretching out for the first time from a comfortable inside draw. The son of Kantharos projects to enjoy a stalking, ground-saving trip, and after finishing full of run but too late in a recent five furlong dash the P. Miller-trained sophomore definitely is moving in the right direction. Vantage Point, a first-time gelding following a $40,000 claim by T. McCanna (good stats with this angle), finished third in the same race Man Friday exits and is lightly raced with improvement possible. Toss him in.
*
*
RACE 6: Post: 4:30 PT Grade: B+
Use: 1-Scottish Star; 4-Edgeway

Forecast: Edgeway lost all chance at the start when winding up far back behind Gamine in the Great Lady M. S. at Los Alamitos last month but has trained very well since and seems certain to bounce back with her best stuff today from her comfortable outside draw at this six and one-half furlong trip. She’s fast on numbers and projects to enjoy a soft pace-prompting trip in this five-runner edition of the Rancho Bernardo H.G3. Scotish Star, a Grade-1 winner in Argentina last year, missed by a neck in her U.S. debut despite having every chance with a perfect trip but getting worn down late by Stellar Sound, who she faces again today. The R. Mandella-trained ‘Star has a right to improve off that race but must overcome the rail. Due to the more favorable draw, we’ll give Edgeway the edge on top but include both in our rolling exotics.
*
*
RACE 7: Post: 5:00 PT Grade: B+
Use: 5-Torosay; 8-Buena Vista

Forecast: Buena Vista appeared in need of the outing when third at this level last month in his first start in almost a year. The Irish-bred gelding seems certain to be fitter and sharper today for a barn that hits at a strong 21% with the second-off-a-layoff angle. A winner over this course and distance last year, the P. D’Amato-trained import should be hard to beat. Torosay was sharp in victory when beating a first-level allowance field here just 12 days ago and is wheeled back quickly while moving up a notch in an attempt by his connections to strike while the iron is hot. It was his first start in almost a year and the Goldencents gelding equaled his career top Beyer speed figure, so you have to wonder if he can come right back and do it again on short rest. We’ll include both in our rolling exotics and then have a few extra tickets keying Buena Vista on top.
*
*
RACE 8: Post: 5:30 PT Grade: B+
Use: 3-Don’t Ju Forget; 7-Shemakecents; 10-Big Switch

Forecast: This is a stronger than par maiden sprint for state-bred juvenile fillies. We’ll triple the race in rolling exotic play while preferring the talented first-timer Big Switch on top. The daughter of Mr. Big has trained like she’s fit and ready for J. Sadler (strong stats with debut runners) and was especially impressive in a five furlong gate drill (:59 2/5, fifth fastest of 82) just six days ago. Drawn comfortably outside, she should inherit an ideal stalking trip and then have every chance to prove her worth. Don’t Ju Forget has the benefit of two prior outings and seems likely to step forward again with today’s extra furlong to work with. The P. Miller-trained filly closed with interest when a solid third in a good race for the level here last month, and with F. Prat staying aboard she’s likely to get the patient ride she apparently prefers. Shemakescents has displayed pretty good speed in her a.m. drills for P. D’Amato and seems likely to give a good account of herself. The daughter of Goldencents is worth including on your ticket as a backup or a saver.
*
*