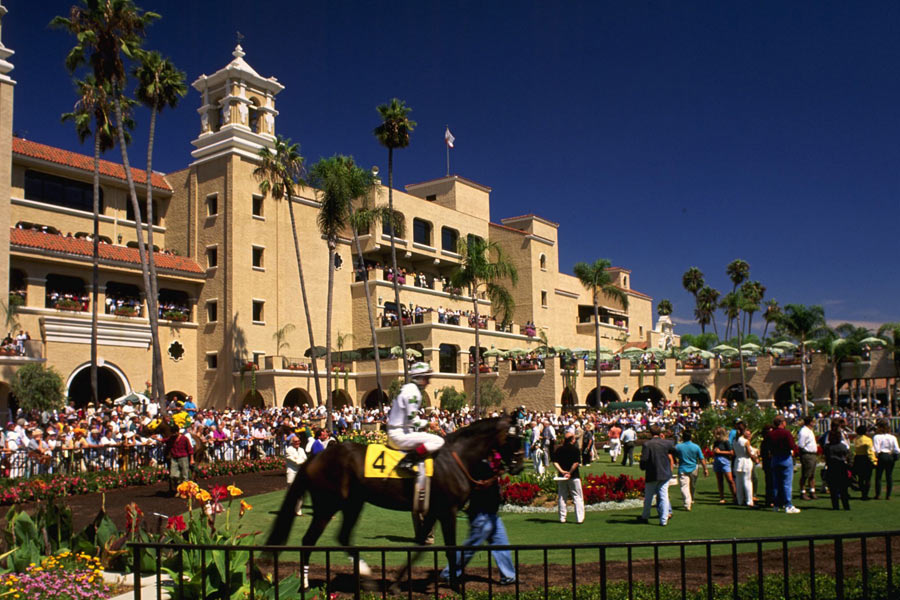 Forecast: Dark Hedges, a voided claim for $20,000 last month and returned to trainer M. Glatt’s barn, surfaces for half that mount in this six furlong sprint for older horses. First or second in seven of 14 career starts and a prior winner over the Del Mar main track, the son of Giant’s Causeway does his best work while on or near the lead throughout, and with recent numbers that are good enough to beat this below par field he’s the one to beat under the assumption that he has at least one good left. Satchel de Ritches, claimed in his last pair and now in the P. Miller barn (a strong 25% with the first-off-the-claim angle), picks up F. Prat but needs good racing luck from his rail draw. Based purely on numbers, a repeat of his race before last will probably be good enough. We’ll give Dark Hedges a slight edge on top but include both in rolling exotic play.
*
*
RACE 2: Post: 2:30 PT Grade: B+
Use: 1-Suki; 3-Viazar

Forecast: Viazar simply ran out of room when a fast-finishing second in a similar starter’s allowance turf event here last month and today switches to U. Rispoli and gets an extra half furlong to work with, so we’re expecting the daughter of Tapizar to be along in time. It was her first outing since November, she’s been given sufficient time in between races to recover, and looks every bit of the 8/5 that she’s listed on the morning line. Suki, a close fifth in the same race our top pick exits, is guaranteed a good ground-saving trip from her rail post position and is probably worth including in your ticket, at least as a backup or a saver.
*
*
RACE 3: Post: 3:00 PT Grade: B+
Use: 5-California Kook; 6-Ginja

Forecast: California Kook looked quite good when returning to winning form over this track and distance last month, easily handling the boys with a strong late kick in a state-bred first level allowance event. She faces open company today and based on numbers she looks quite capable of winning right back. Ginja, a solid runner-up at this level last time out while almost seven lengths clear of the rest, should fire a similar shot today, though based strictly one numbers she’s not as fast as our top pick and seems to have leveled off in recent races. We’ll include her a on ticket or two as a backup, but the main push goes to California Kook.
*
*
RACE 4: Post: 3:30 PT Grade: B-
Use: 3-Gold Rush Candy; 4-Stan the Hot Man; 7-Forgiving Spirit

Forecast: Forgiving Spirit breezed well at the OBS April when clocked in :10 flat and makes his first career start for P. Miller with a steady series of recent drills at San Luis Rey Downs to have him fit and ready. With F. Prat taking the call, the son of Shaman’s Ghost is certain to attract plenty of play in race restricted to Cal-breds. Stan the Hot Man displayed ability when second in a fast heat at Golden Gate Fields in his debut last month while six lengths clear of the rest. The number was decent, and we suspect the J. Wong-trained colt will produce a forward move, so among those that have raced he appears the most advanced. Gold Rush Candy was bet off the board in his debut, but after breaking well he was simply outfooted during the early stages and then had a bit of rough go when attempting to rally into the lane. The performance certainly was below expectations but the son of Danzing Candy probably deserves another chance, so we’ll toss him in.
*
*
Race 5: Post: 4:00 PT Grade: C+
Use: 1-Racetrackers; 2-Full Draw; 4-Man On the Moon

Forecast: Racetrackers draws the rail, drops to his lowest level ever and can beat this field if he can transfer his grass form to the main track. His one prior outing on dirt wasn’t bad – he was fast-finishing third sprinting in his debut – so there’s hope that these conditions will suit him. Full Draw, a runner-up over this track and distance in a similar event last month, projects to draft into a comfortable second flight, stalking position and have every chance from the top of the lane to wire. He’s never really been known to punch it in late but with numbers that fit you have to use him. Man On the Moon, claimed in three of his last four starts and now in the R. Hess, Jr. barn, was no factor vs. tougher foes in his first start since shipping in from the Midwest but against this group he’s much more likely to be competitive. With patient handling, the son of Distorted Humor may be a late threat.
*
*
RACE 6: Post: 4:30 PT Grade: B-
Use: 6-Witch Moon; 9-Quinevere; 10-Badger Kitten

Forecast: Trainer P. D’Amato has two major players in this maiden claiming middle distance turf event for older fillies and mares. Witch Moon, competitive with straight maiden foes last spring at Santa Anita, she drops into a seller in her first start since late May and seems to have found a field she can beat. The four year old daughter of Malibu Moon shows a steady, healthy series of recent works to have her fit and picks up F. Prat, so at 3-1 on the morning line she’s the one to beat. Stable mate Badger Kitten is a dangerous Delaware Park invader seeking some of that valuable ship-and-win bonus money, and her form suggests this is a field she can be very competitive with. The daughter of Kitten’s Joy prefers to lag and then take hold late, so given that type of ride by J. J. Hernandez she should be able to make some noise close home. Quinevere, a closing runner-up in her local bow for P. Miller while being aided somewhat by a quick early pace, has a right to move forward and is worth some consideration with U. Rispoli staying aboard.
*
*
RACE 7: Post: 5:00 PT Grade: C+
Use: 1-Scream and Shout; 3-Kind But She Lies

Forecast: Kind But She Lies should be able to win one of these bottom-rung maiden claiming sprints for fillies and mares eventually, perhaps today. In the frame in her last two starts, most recently with a career-top speed figure, the E. Kruljac-trained daughter of Exaggerator projects to be comfortably placed stalking the pace and then have her chance to grind out a win. Scream and Shout, on the shelf for exactly a year, drops to the bottom for her comeback, returns to the main track, and lands F. Prat, so we’re going to assume the T. Yakteen-trained filly is fit and ready. The works look fine for a cheap type so if she leaves cleanly from the rail she’s certain to be at least a strong pace factor. We’ll try to survive and advance using just these two in rolling exotic play.
*
*
RACE 8: Post: 5:30 PT Grade: B
Use: 3-Lieutenant Dan; 4-Collusion Illusion; 8-Gregorian Chant

Forecast: Collusion Illusion is fast enough on figures to win this race, but he’s never been on grass, though as a son of Twirling Candy there’s no reason he shouldn’t handle it. Away since finishing third in the Malibu S.-G1 in December, the M. Glatt-trained colt has the ideal stalking style for this abbreviated turf dash and if within range at the head of the lane should have every chance to nail the speed types. Lieutenant Dan earned a career top number when beating a lesser field over this course and distance last month in his first start in more than a year. He’ll get tested for class day, but if the son of Grazen runs back to his last race he’ll be in the battle throughout. Gregorian Chant found himself on the pace in the Jaipur S.-G1 at Belmont Park last time out and that’s not the way he wants to run. A prototype late-running turf sprinter, the English-bred gelding won’t have an easy task over a course that promotes the inside speed types, but he’ll be rolling late and should at least get a piece of it.
*
*
RACE 9: Post: 6:00 PT Grade: B
Use: 2-Bold Endeavor; 6-Order and Law

Forecast: Four of the seven entrants in this allowance optional claiming main track miler exit the same race, including the horse that won it, Order and Law. Extra brave in victory while under pressure every step of the way (and appearing beaten at the quarter pole), the son of Violence re-rallied into the lane and drew clear impressively while earning a career top speed figure. He moves up to the $80,000 level for new trainer T. McCanna and in this race projects to settle outside the other two speed types, and employ stalking and pouncing tactics, a style that he’s comfortable with. Bold Endeavor was the 4/5 favorite in that race but really didn’t have any excuse and weakened to finish fourth. He’s always liked the Del Mar main track and has better races to go back to, so we’ll give the M. Glatt-trained gelding another shot. These are the two we’ll be including in rolling exotic play and with little extra push going to Order and Law.
*
*
RACE 10: Post: 6:30 PT Grade: B-
Single: 12-Finnley’s Kitten

Forecast: Finnley’s Kitten was given an educational run in her debut last month in a similar grass miler for state-bred fillies and mares and did well to finish fourth before galloping out strongly in a better effort that the line will show. With that bit of experience behind her, the daughter of Kitten’s Joy should step forward significantly even from an unfavorable outside draw. F. Prat stays aboard for the R. Baltas-trained filly, who adds blinkers and shows a couple of easy breezes since raced. At 5/2 on the morning line she’s a win play and rolling exotic single.
*