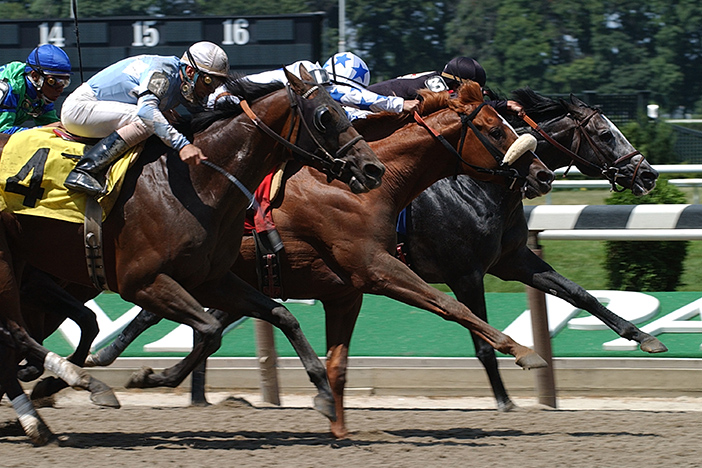 1 – The most significant performance of the extended holiday weekend comes courtesy of St Mark’s Basilica in his nothing-short-of-exceptional victory in the 10F Coral-Eclipse S.-G1 at Sandown on Saturday. After winning three previous Group-1 races against his own age group, including the Dewhurst S. at Newmarket, the French 1000 Guineas at Longchamp and the French Derby at Chantilly, the Aidan O’Brien-trained colt made a mockery of older rivals, chief among them Saudi Cup-G1 and Dubai Sheema Classic-G1 winner Mishriff, while producing the type of acceleration two furlongs out that only the great ones possess.

The French-bred son of Siyouni must now be rated the best horse in Europe, if not the entire planet, and would be a wonderful addition to any Breeders’ Cup field, though he may very well have other fish to fry overseas in the fall. “Of all the times we’ve trained horses through all the years, I can’t remember that we’ve had (a performance) like that,” said O’Brien.

2 – A critical race at Belmont Park for older horses, the 10F Suburban S.-G2, offered a rematch of the first two finishers from the 2020 Jockey Club Gold Cup-G1, the unbeaten Happy Saver, and the Dubai World Cup-G1 winner Mystic Guide. But over a sloppy sealed surface that neither appeared to grab, it was Max Player (not Maxfield) who sprung the upset in a race that proved little other than the winner’s affinity for a muddy track.

A distant third in both the Belmont S.-G1 and the Travers S.-G1 last summer and then nowhere to be found in his four most recent races (including a 24-length drubbing to the aforementioned Mishriff in Saudi Arabia), the son of Honor Code was game in victory but earned only a 101 Beyer speed figure, an indication that the others ran down to his level, not the other way around. Attached to the victory is an all-expense paid ticket to the Breeders’ Cup Classic-G1 at Del Mar. But there will be no rain on the first Saturday in November in San Diego county.

3 – A legitimate Grade-1 front-runner such as Breeders’ Cup Mile-G1 winner Knicks Go facing a handful of thoroughly outclassed rivals that have no chance to apply even a modest amount of early pressure is the perfect recipe for the easily predictable outcome of the 9F Prairie Meadows Cornhusker-G3 Friday evening. His 10 length margin of victory manufactured a career-top 113 Beyer Speed Figure while reaffirming what trainer Brad Cox said after the 5-year-old son of Paynter finished a fading fourth at 4/5 in the Met Mile in early June. “He’s a two-turn horse, was Cox’s simple but entirely accurate explanation.

Now, with 21 races on his resume, Knick’s Go clearly has established one other indisputable characteristic: when facing top class company; he is a dyed-in-the-wool need-the-lead type. Though unproven at 10 furlongs – but certain to stay the trip under pristine conditions – he could very well resurface at Del Mar August 21 for the $750,000 Pacifica Classic-G1 in what would serve as a dress rehearsal for the Breeders’ Cup Classic-G1 that will be staged over that same course and distance 11 weeks later. Mystic Guide could be headed in the same direction, as well.

4 – It’s the time of the year when we’re inclined to seek out potentially high-class, late-developing 3-year-olds – those that weren’t ready or seasoned enough for the Triple Crown – to make an impact in the sophomore ranks and perhaps even steal an Eclipse Award, such as what Arrogate did a few years back. While he’s nowhere near that level just yet, First Captain will have his chance to establish championship credentials at Saratoga, with the 10F Travers S.-G1 his late-summer goal. Unbeaten in three starts but yet to race farther than a mile, the son of Curlin, at 40 cents on the dollar, was workmanlike when grinding out a one and three-quarter length victory in the Dwyer S.-G3 at Belmont Park on Monday. The Beyer speed figure was a just okay 90, a career low.

However, Shug’s colt has a pedigree to excel over a classic distance and farther. In as division which currently has Essential Quality and Hot Rod Charlie squarely at the top, a new shooter such as this $1.5 million yearling purchase, may still be capable of bringing fresh blood and new life to a division that remains there for the taking.

5 – Gamine has been beaten just once in nine starts. She failed to see out the nine-furlong trip in the 2020 Kentucky Oaks-G1 when third (and then subsequently disqualified for a bad test) but has been otherwise perfect, most recently coasting home to register a 10-length romp in the 6.5F Great Lady M. S.-G2 at Los Alamitos on Monday. In any other year, she’d probably be sent to Saratoga, where she won the 2020 Test S.-G1 by seven lengths, but a trip to New York isn’t currently an option for trainer Bob Baffert. We anticipate Gamine will remain in the West and be given a run, perhaps two, to prepare to defend her title in the Breeders’ Cup Filly & Mare Sprint-G1.

The Rancho Bernardo (Aug. 20) at Del Mar logically would be next, but that race is just a Grade-3 with a $100,000 guaranteed purse and will be carded under handicap conditions, so you have to wonder just how much weight she’d be asked to carry in order to make the race competitive. Facing males eight days later in the 7F Pat O’Brien for twice the purse money (it’s a win-and-your-in race, too) might be a better option, especially under the 122 lb. impost she would carry, according to the conditions of the race.