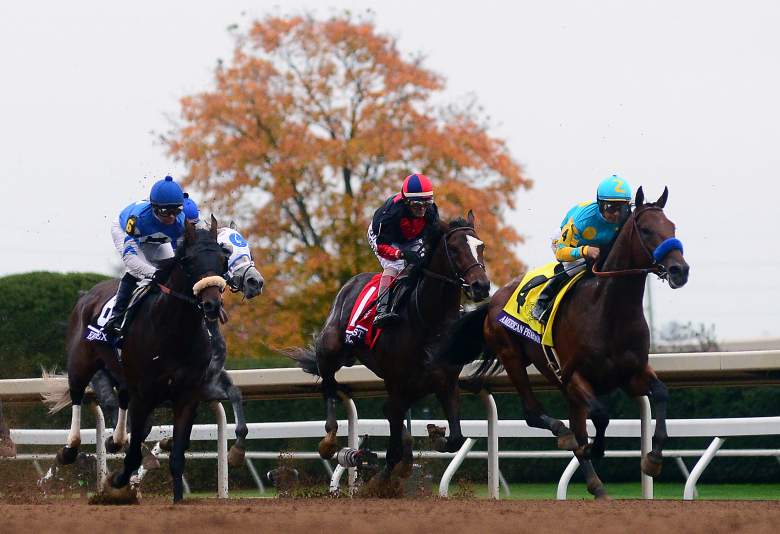 Forecast: An excellent Saturday program (good racing, huge fields) begins with a two-turn maiden affair for older horses that offers what probably will be a short price favorite in Implicator.  Improving with every outing according to his speed figures and getting back on fast ground, the son of Race Day likes to lag and produce a late run and with a healthy race and workout pattern plus a good inside draw the R. Moquett-trained gelding seems likely to produce another forward move. There should be ample pace to compliment his late running style, so with good racing luck he’s a logical rolling exotic single.

Forecast: River Echo was a voided $50,000 claim last December and then disappeared.  He turned for $6,250, so he’s clearly walking on eggs but if the J. Hollendorfer-trained gelding has one good one left – and the work tab looks pretty good – he’ll beat this bottom-rung field, but that’s a huge “if.”  The low percentage J. E. Felix – a jockey this barn has no history of using – takes the call.  Esposito, dropping off a $10,000 claim by R. Diodoro, makes his first start for a trainer that hits at a remarkable 31% with this angle, understandably so because of aggressive placements like this.  A winner of two of his last three, most recently with a speed figure that is much stronger than par for this level, the veteran son of Ghostzapper switches to the stable’s go-to rider D. Cohen and is much more likely to reproduce his form than River Echo.  We’ll use both in our rolling exotics and then press with Esposito on top in a race that probably should be treated with caution.

Forecast: North Side seems fairly solid in this maiden $30,000 claiming sprint restricted to 3-year-olds after finishing second in a slightly tougher spot as the favorite over a sloppy track last month.  The son of Into Mischief, originally a $320,000 Saratoga yearling, obviously is being culled from the stable – if you want him, you can have him – but against this group the S. Asmussen-trained colt shouldn’t have much difficulty earning his diploma.  However, at 2-1 on the morning line and likely to go lower, he won’t be offering much wagering value.  Rolling exotic players may also take a look at Flexati, nosed out while more than four lengths clear of the rest in a recent maiden $25,000 sprint over this track and distance while earning a speed figure that is fairly competitive with North Side.  However, low percentage connections (and the rail) hardly inspire confidence, so he’s probably not worth much more than a ticket or two as a back-up.

Use: 2-Hardly a Secret; 6-Street to Indy; 8-Hunka Burning Love

Forecast: The fourth race is a bit of scramble for conditioned $32,000 middle distance claimers.  We’ll try to get by using three.  Street to Indy recently failed to make the course when eased over a sloppy track he clearly couldn’t handle, but on today’s fast ground the son of Street Sense seems likely to return to good form.  He earned a giant speed figure when beating first-level allowance foes three races back and is logically spotted while returning to the claiming ranks for the first time since a $25,000 score at Fresno last fall.  He’s got the type of tactical speed to be forwardly placed behind whatever pace materializes. Hardly a Secret fits the conditions just right and is fresh from a game win with a solid speed figure in an open $35,000 seller last month.  A 10-time career winner (three of which have been earned at Oaklawn Park), the veteran son of Creative Cause is drawn nicely inside and projects to secure a good second flight, ground-saving journey.  Hunka Burning Love returns in two weeks after being pitched too high in an optional $50,000 claimer over a sloppy track.  Actually, his fifth place finish and the speed figure he earned wasn’t bad at all, so with this drop in class the I. Mason-trained gelding has a good chance to significantly improve.  He’s been unplaced in three prior outings over the local main track, but one was a sprint and the other two came over wet tracks, so we’re not going to worry about it.

Forecast:  Here’s a salty $32,000 claiming sprint for older horses.  Town Champ just won a first-level allowance sprint over this track and distance 16 days ago with a career-top speed figure (and one that is much better than par for this level), so this drop in class following a hot win is a bit concerning.  The Speightstown gelding obviously has issues – he’s a six-year-old with only eight career starts – but it is fair to point out that he remains above his claim level ($20,000), so perhaps the S. Asmusssen barn has no illusions about the future and is simply running him where he can win.  Pat Daddy is razor sharp as well, having trounced a restricted $32,000 field here just nine days ago with a good stalking trip and strong late kick.  The N. McKnight-trained gelding has won 11 races from 50 career starts and clearly loves the local main track with four wins, a second and a third in six starts.  Silver Ride must avoid trouble from the rail but he’s fast enough on numbers to be worrisome. This significant (though justified) class drop could help wake up the Candy Ride gelding.

Forecast: This is another contentious sprint, a three-other-than optional claimer that we’ll try get past using only two.  Allow yourself to spread deeper if you feel the need.  West Coast shipper St. Joe Bay has never had much luck over the Oaklawn Park main track but he’s a graded stakes winner this year and remains above his claim level, so we’ll give the J. Sadler-trained gelding a very slight edge on top.  With the switch to J. Rosario and in a field with plenty of speed, the J. Sadler-trained gelding might find himself situated either in a pace-pressing position or in a stalker’s slot from just off the early heat.  At this level, he’s a strong threat regardless of the race flow.  Drena’s Star is getting quite ambitious today after winning a pair of starter allowance sprints when facing much softer foes after being claimed for $12,500 in February.  He has a good pressing style, numbers that fit, and is relatively fresh, though his rail post is no bargain.  We’ll use him a on a ticket or two while preferring St. Joe Bay on top.

Forecast: Here’s another spread race with a number of possibilities.  Truthfully, we could include half the field in our rolling exotics and still get knocked out.  Candy Store missed in the mud when favored in a $50,000 starter’s event earlier this month but he returns to his claim level today ($40,000), retains J. Talamo, and should draft into an ideal second flight trip and then have his chance to seal the deal from the quarter pole home.  He’s 9/2 on the morning line and really shouldn’t go any lower.  Federal Case was out-footed when sprinting vs. second-level allowance foes in his local debut in February but seems likely to improve stretching out and dropping in class.  Graded stakes placed in his younger days, the A. Stall, Jr.-trained gelding has been facing tougher than she’s seeing today, so we’re expecting to see sufficient improvement to make him dangerous.  Jungle Warfare has never been keen on winning but he’s a fit on numbers and goes for the always-potent J. Sadler/J. Rosario barn.  At 6-1 on the morning line we’ll toss him in, poor outside draw notwithstanding.

Forecast: Sneaking Out, away since last summer but training like she’s ready to return in peak form, is eligible to this second level allowance race even though she’s a two-time stakes winner and Grade-2 placed (her state-bred performances aren’t considered for eligibility). Back in the J. Hollendorfer barn, the California-bred daughter of Indian Evening is more than fast enough on numbers to beat this field and lands J. Rosario, so at 7/2 on the morning she looks like the play of the day (hint, you won’t get 7/2).  She can win on the lead or from a stalking position so race shape really won’t matter much.  We’ll make her a strong straight play and rolling exotic single.

Forecast: Any one of the three listed above are capable of winning this sprint stakes for 3-year-olds, but clearly, as a Grade-1 winner, Eight Rings is the one to beat, especially based on his work pattern that suggests he’s fit and ready for a barn that is borderline unbeatable with its West Coast shippers.  The son of Empire Maker won his Del Mar debut as a 2-year-old with a sensational performance and speed figure so we know he can fire fresh, and with J. Rosario hopping aboard for the first time this talented seems likely to go lower than his morning line of 5/2.  That said, the other two major players in here are pretty salty.  Long Weekend was a crushing winner with huge number in the Gazebo Stakes last month and lands the cozy outside draw that will allow J. Talamo to pop and go as the potential controlling speed.  The son of Majesticperfection is clearly tackling a much tougher group today but if he clears without pressure he may never look back.  Echo Town probably is worth including as well, at least as a saver.  The Speightstown colt does his best running from off the pace and if faster than expected early fractions materialize, he could cause some serious damage late.

Forecast: Bellafina is the 8/5 morning line favorite in this year’s edition of the listed Carousel Stakes for older sprinting fillies and mares.  Yes, she looks like the best filly in the field, and anything close to her superb runner-up effort to Covfefe in the Breeders’ Cup Filly and Mare Sprint-G1 (she was almost eight clear of the rest) wins this race, but the daughter of Quality has a history of failing as the public choice (four times) and most recently was worn down at 3/5 in the La Brea S.-G1 in last December.  Furthermore, she’s never run well following a ship (four times).  Yet, her recent drills indicate she’s lost none of her speed, so despite the rail we’ll put her on top, but not single her.  Mia Mischief should have plenty of pace to set things up for her lack kick and will likely enjoy a clear run from her ideal outside draw.  She’s not nearly as fast on figures as Bellafina based on her recent races but if there’s a meltdown she could be there to pick up the pieces.

Forecast: Unrighteous appears to be an obvious rolling exotic single and seems certain to go lower than his generous morning line of 5/2.  The T. Pletcher-trained colt picks up J. Rosario in this maiden special weight two-turner after finishing seventh when clearly overmatched in the Tampa Bay Derby-G2 in his most recent race.  Before that, the son of Violence was a strong second in a much tougher, highly-rated straight maiden two-turner at Gulfstream Park while five clear of the rest and anything close to that effort today earns him a diploma.  We’ll make him a straight play and rolling exotic single.