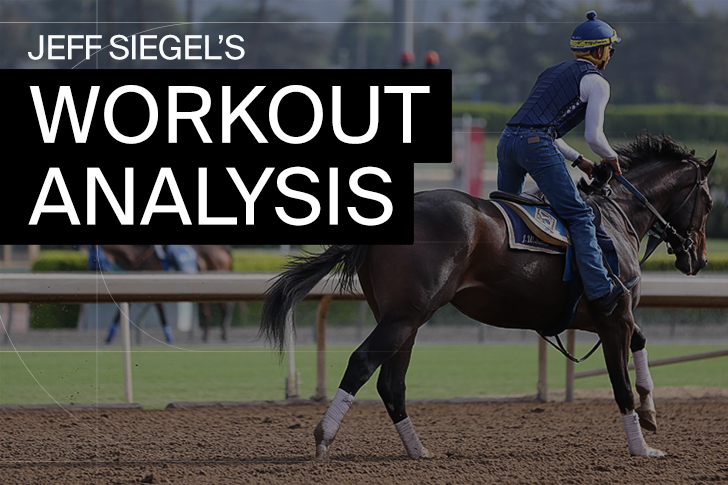 Updated every Wednesday, the Primed and Ready List identifies five horses (listed alphabetically) that have recorded an outstanding workout within the past seven days and appear ready for a top performance. Workouts originate from Southern California (Santa Anita), New York (Belmont Park) and Palm Meadows (South Florida) and can be viewed by clicking the link included in the description or at xbtv.com. It is suggested that stable mail is utilized to alert when and where each horse is entered to race.
*
*
CURIOUS INJI – (J. Mullins) July 4, 2021, Santa Anita, 5f, 1:01.3h
View Workout

Under wraps every step of the way in solo training track drill, final half mile in :24.1 and :48.4, plenty left late. Unplaced in three career starts, most recently in a maiden claiming miler (stumbled badly at the start), but the daughter of Misremembered surely appears capable of better and seems likely to surface in a winnable spot early in the Del Mar season.
*
*
HIGHESTDISTINCTION – (T. Proctor) – July 4, 2021, Palm Meadows, 6f, 1:13.2b
View Workout

Sharp, eager, and strong through the lane in solo six furlong main track drill while finishing with plenty left, final quarter mile in :24 and small change, mostly on his own. Lightly raced, won his last pair (most recently at Delaware Park) on dirt with rising speed figures but has a pedigree that suggests he’ll handle grass as well. Remains on the upgrade.
*
*
LADY MYSTIFY – (P. Eurton) July 4, 2021, Santa Anita, 5f, 1:00h
View Workout

Never asked in sharp five furlong main track drill, final three furlongs in :11.2 and :35.3, plenty left late. Had nothing behind her when graduating by 18 lengths last time out and will get tested on the raise, but the daughter of Bernardini seems to be made of the stuff. Ready to step forward again.
*
*
SEMPER FIDELIS – (S. Joseph, Jr.) July 3, 2021, Palm Meadows, 4f, :47.1h
View Workout

Barn tends to let them roll in the a.m., but this lightly-raced son of Fast Anna was under cruise control throughout in sharp half mile main track drill, final three furlongs in :35 flat. Been away since December but appears to be returning better than he left and should be hard to beat vs. older maiden special weight foes.
*
*
WIT – (T. Pletcher) July 4, 2021, Belmont Park, 5f, 1:01.2b TT
View Workout

In company inside Lady Valentine (same time) in training track drill, breaking off a length in front and then finishing a similar margin ahead at the wire, some restraint early and then coasting through the lane (galloped out well, too) while clearly best. Practical Joke juvenile won at first asking impressively and seems likely to be seen in stakes company at Saratoga early in the season.
*
*