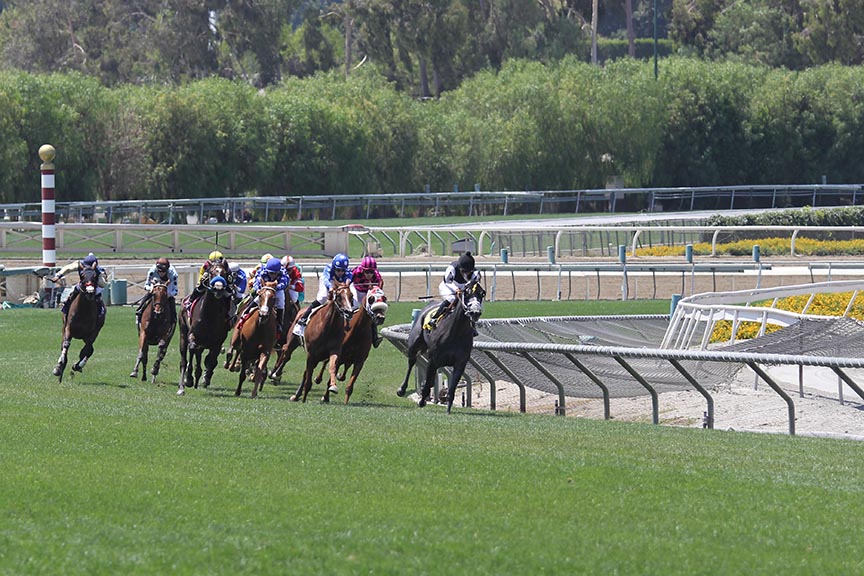 The status of the main track and whether any races might be transferred from the turf to dirt are questions that can’t be answered as of this writing, so we’ll handicap the card at face value and hope the predicted precipitation holds off until the early evening. The opener, a nine furlong grass event for maiden 3-year-olds, has three main players including the logical favorite, #5 Liam the Charmer. Second over this course and distance from the 12-hole while five clear of the rest in an excellent effort in late February, the Mike McCarthy-trained colt should run at least as well today if not better with top grass rider Flavien Pratt staying aboard. The son of Smart Strike draws a better post today and will be hard to beat. High percentage trainer Phil D’Amato has two bullets to fire and both are contenders. #6 Wild and Deb flashed promise in his only start last summer at Del Mar when an excellent second to Santa Anita Derby entrant Uncle Lino and his recent works on the comeback trail indicate he’s fit and ready for a huge effort off the bench. His pedigree certainly suggests he’ll handle these conditions and the barn’s stats with layoff runners (27% with a flat-bet profit) are positive factors that make him a “must use” in rolling exotic play. D’Amato’s other starter, #8 Clear the Way, should love today’s extra furlong and will be running on late. The switch to Rafael Bejarano is a major plus, so at 6-1 on the morning line he has to be included as well.

Sophomore $16,000 claimers sprint the abbreviated trip of five and one-half furlongs in the second half of the early daily double. #4 Passau has won two of his three starts and if he shows up with his best stuff today he’ll be tough once again. Kent Desormeaux stays aboard, knows him well, and should have him on or near the lead throughout. #1 Navy Hymn is stuck on the rail but he’s never been worse than second in four lifetime starts and if he leaves cleanly from the rail he’ll be a strong factor throughout. After breaking his maiden for a $30,000 tag last month, the son of Songandaprayer is realistically spotted vs. his own age group and retains Bejarano. We’ll try to get by in rolling exotic play using just these two.

Maiden $50,000 older claimers meet at the extended sprint distance of six and one-half furlongs in the third race, an open affair that probably requires a bit of a spread. #3 Spanish Hombre, a decent third after a slow start in a better-than-looked debut, returns vs. slightly stronger rivals for top trainer D’Amato and should appreciate today’s extra furlongs. The gelded son of Spaniard was scratched out of a race yesterday for this more favorable spot, and with a clean break today he’ll be a strong factor every step of the way. #9 Mischievous Bull may be the quickest of the quick and if he can shake loose early he might get brave late. He switches to Mario Gutierrez, lands the comfortable outside post and could stick much better today at this lower level. #5 Eric the Trojan, a decent third in the same race Mischievous Bull exits, retains Prat and could be dangerous from off the pace. All three should be included in rolling exotic play.

#1 Stormy Liberal is better known as a grass specialist but his only career start on the main track – an off-the-turf event two races back – produced an excellent runner-up performance to subsequent stakes winner Guns Loaded. Not much better will be needed to beat this field, though the rail post does him no favors. #6 Chief Lion, first off the claim for good trainer Richard Baltas, usually gets a piece of it and should be running on late. He was more than three clear of the rest when a sharp runner-up to Seeking the Sherif in a highly-rated race for the level last time out. #5 Rocko’s Wheel, away since September but with a history of running well fresh, could be live off the bench for a trainer that boasts super stats with come-backers. The son of Grazen loves this main track (two wins in three starts here) and is another that could be heard from in the final furlong. We’ll give a slight edge on top to Stormy Liberal but go three-deep in our rolling exotics.

The Providencia Stakes for 3-year-old fillies on turf looks on paper to be a replay of the China Doll Stakes, in which four of the first five finishers return, only this time the distance is a furlong longer at a mile and one-eighth. The filly that wound up fifth – beaten just a length for all of it – might have been best. #1 Decked Out lacked room when attempting to rally in the final furlong yet kept to her task and was finishing fastest of all despite the roadblock, and then galloped out full of run to be far clear of the pack a sixteenth of a mile past the wire. With clear sailing today and with more ground to complement her late-running style, the daughter of Street Boss looks capable of producing a winning bid and offers considerable value at or near her 8-1 morning line. #2 Mirage, #9 Lady Valeur and #5 Nodiac finished one-two-three in the China Doll and all three must be given a strong look once again. Even #3 Kiss N Scat, who wound up ninth of 10 in that race has a chance; the Jerry Hollendorfer-trained filly does her best work on the front end and in a race lacking in speed could be dangerous if she can shake loose early. It’s a spread race in rolling exotic play, for sure, but we’ll have extra tickets on top using Decked Out.

Sophomore maiden fillies sprint six and one-half furlongs in the sixth race; we’ll go four-deep and hope that’s enough. #1 Ready to Hula Lula has been a beaten choice in both of her career starts to date, but today she adds blinkers, retains Bejarano, and looks quick enough to utilize her rail post to good advantage. However, that final sixteenth of a mile might really be stretching her limit. #3 Emmzy missed by a neck in a similar event over this track at this trip last month while on the pace; we’re wondering if a change in tactics to accommodate patient handling might be the way to go today. #7 Crimson and Gold is another that might appreciate a change in tactics; she ran quite well to be second in her debut from off the pace but then faded after producing a strong mid-race move when even money in a similar maiden special weight dash in her most recent outing. She switches to Stevens and deserves one more chance. 8-Street Sweets walked out of the gate in her debut and then closed a world of ground in a promising debut. She’s returned to work well and will fit with these if she leaves with her field.

#1 Songbird is 1/9 on the morning line for the Santa Anita Oaks while seeking her seventh consecutive victory. This should be a mere formality for the daughter of Medaglia d’Oro, whose margin of victory has never been less than 3 ¾ lengths. And she’s never being asked for anything close to her best. The only mystery is whether she’ll be as effective over a less-than-fast track than she has been so far on dry ground. Obviously, there’s no play here, other than using her as a free bingo space in rolling exotic play.

#4 Mor Spirit and #3 Danzing Candy meet again, this time at nine furlongs over a potentially wet surface. Danzing Candy just wired the field in the San Felipe Stakes when allowed to control the pace from gate to wire and we suspect similar tactics will be tried today; however, there’s much more speed in this field than he faced last time and it’s possible that for the first time in his career he’ll have to win from a stalking or second-flight position. Mor Spirit has looked terrific in recent workouts and should be primed for the race of his life. A faster than par early pace – practically guaranteed if the field remains as is – should do nothing but promote his late-running style. We’ll use both in our rolling exotics but if Mor Spirit is a good as trainer Bob Baffert thinks he is, the son of Eskendereya will be along in time.

Use: 7-Twentytwentyvision; 9-Finnegans Wake; 12-What a View

We’ll handicap this race under the assumption that it will remain on turf. #12 What a View is stuck way outside and is picking up five pounds off his impressive gate-to-wire victory in the Kilroe Mile S.-G1 but this vastly improved son of Vronsky seems the one to beat again despite the tougher task at hand. Desormeaux stays aboard, knows him well, and could employ stalking tactics if the situation dictates. #9 Finnegans Wake, away since July, has been burning up the track at San Luis Rey Downs for his comeback, though a flat mile might be a tad short for him. Still, the Peter Miller-trained horse has loads of class – he’s earned $1.5 million in his career – and presents a danger from off the pace. #7 Twentytwentyvision, never off the board in eight career starts, finished second in the Eddie Read S.-G1 in his only prior start in added money company so his best race must be respected. He, too, is launching a comeback but the recent works are sharp and this lightly-raced gelding should draft into an ideal, second-flight, stalking position. We’ll give What a View the edge on top but triple the race in rolling exotic play.

Use: 6-Tough But Nice

#6 Tough But Nice is back sprinting where he’s probably most effective and a repeat of his winning performance two races back – a sharp 2 ½ length allowance victory with a career top speed figure – looks more than good enough to beat this field. The Hector Palma-trained colt should be quick enough to secure a favorable pace-stalking spot and then go on with it when ready. At 3-1 on the morning line he’s a straight play and rolling exotic single.

#4 Pacific Heat was beaten at 4/5 in the China Doll Stakes last month over a mile on turf so today she switches to the main track and backs up to an extended sprint distance in this state-bred stakes for sophomore fillies. Her dirt form looks pretty good – she won her maiden debut by more than 13 lengths and then won the Golden State Juvenile Stakes at Del Mar by more than five lengths – so today’s conditions might very well bring out of the best in her. #2 Skye Diamonds is a prototype late-running sprinter and should fire her best shot after beating a first-level allowance field here last month. A sharp half mile workout in 47 seconds flat should have her right on edge. Strong preference goes to Pacific Heat but both should be used in rolling exotic play.

#4 Giant Expectations earned a huge speed figure when settling for second in a fast, highly-rated maiden sprint here last month and anything close to that type of performance today earns him a diploma. The Peter Eurton-trained colt has the proper style for this seven furlong trip and should inherit an ideal pace-stalking position. #10 American Freedom is a fast-working first-timer with a hot pedigree and a fancy work tab. A half-million dollar yearling purchase by Pulpit, the Bob Baffert-trained colt won a three-horse team gate drill recently flashing superior late speed en route to a 1:11 1/5 clocking. He’s clearly fit and ready for a major effort first crack out of the box. #6 Boy Howdy has done some good work in the morning for trainer Bill Spawr and is probably worth a little bit of look, while #8 Brown’s Baby Boy, a promising second vs. maiden claimers in his only outing, tackles a much tougher group today but with a forward move could be good enough to at least hit the board.