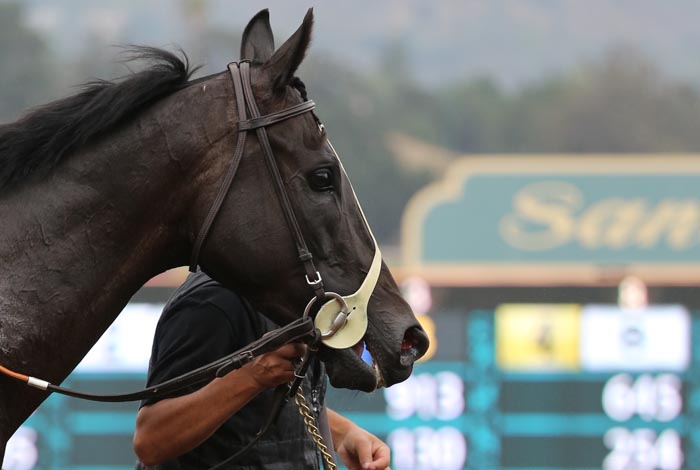 The Thursday opener features state-bred juvenile fillies with the spotlight on California Chrome’s debuting full-sister #3 R Sunday Surprise. The Doug O’Neill-trained filly has shown a bit of talent in the a.m. – nothing like her champion older sibling – but enough to make her a contender in what appears to be a moderate race for the level. Top billing goes to #6 Ms Wakaya, a daughter of Flower Alley with a series of solid drills to her credit for trainer Steve Miyadi, whose first-timers often run better than they work. Both should be used in rolling exotic play with preference on top to Ms Wakaya.

A conditioned allowance event over nine furlongs on turf drew six runners in the second race, with the improving #3 Little Curlin and the comebacking #5 Texas Ryano appearing well-spotted for major efforts. Little Curlin figures to enjoy an ideal pace-prompting trip while being reunited with Drayden Van Dyke, who was aboard the Jerry Hollendorfer-trained horse in victory two races back. Texas Ryano, away since January but training like he’s fit and ready for Carla Gaines, has a proven history of firing fresh and regains Joe Talamo, who has gotten the most run out of him in the past. We’ll give the progressive Little Curlin the edge on top but use both in our rolling exotics.

The third race is a split of the opener and appears to be the stronger of the two state-bred juvenile filly sprints. #6 Dixie Chick Rocks has been impressive in the morning for Dan Hendricks and should come out firing. #7 My California, a decent runner-up in her debut, figures to benefit greatly from the outing and switches to Tyler Baze for a barn that clicks with a strong 20 percent of its second-time starters. #8 I’ll Be Around is bred for speed on both sides of her pedigree and has flashed enough zip in the morning to be considered dangerous. Let’s use all three in our rolling exotics while very slightly preferring Dixie Chick Rocks on top.

#6 Tribal Tribute is strong in the speed figure department and is overdue for a win; the Phil D’Amato-trained gelding drops for the money run and should draft into a good second-flight positon and have every chance in today’s fourth race, a $50,000 claiming turf miler for older horses. He’s been first or second in 12 of 26 career starts but is winless in five outings over the Santa Anita lawn, so while we’ll prefer him on top we can’t quite make him a single. #5 Batti Man enjoyed his role as the controlling speed in a clever score vs. $32,000 claiming foes last month and could be dangerous right back despite the double jump in class. Martin Pedroza stays aboard and no doubt will employ similar gate-to-wire tactics.

#4 Dis Smart Cat, two-for-two and yet to be challenged in her racing career, moves into first-level allowance company in today’s fifth race while stretching out to a mile for the first time. The daughter of Square Eddie continues to impress in the a.m. and shouldn’t really have any difficulty with the longer trip, though the projected race flow indicates she might have some company up front end if Baze tries to gun to the lead. We think she can stalk and win if the situation dictates – just as she did in her maiden score – so we’ll put her on top and expect the unbeaten streak to continue. #6 Miss Star Maker may be worth using as a back-up or a saver; the Jack Carava-trained mare prefers to run second rather than win and looks more logical as an exacta partner with ‘Cat but is in good form and makes a significant jockey switch to Santiago Gonzalez.

Entry-level allowance fillies and mare sprint five and one-half furlongs in the sixth race, a contentious affair requiring a spread in rolling exotic play. #2 Amira J makes her 2016 debut after showing promise in a pair of juvenile outings, most recently last August when second as the odds-on favorite in the Ontario Debutante Stakes at Woodbine. We know she can fire fresh – she won her debut by 14 lengths – so she has to be respected even though her local workouts for new trainer Kristin Mulhall don’t really jump off the page. #1 Distinguishable is fresh form a nice maiden score here last month and earned a solid figure; the Hollendorfer-trained daughter of Distorted Humor has no options from the rail other than to bust out and go and if she leaves cleanly should be on or near the lead. #4 Discatsonthesquare figures to do her best running from mid-pack; both of her career wins have come over the Santa Anita main track and with some help up front she could be heard from late.

Use: 5-Conquest So True; 8-Spiritual

We’ll double the seventh race, a starter’s allowance sprint for fillies and mares at six furlongs. #8 Spiritual broke her maiden at Los Alamitos in her debut and then finished second under these conditions last month behind Dis Smart Cat (see sixth race); there doesn’t appear to be anything that good in here so the Art Sherman-trained daughter of Papa Clem could easily regain her winning form. We’ll also include #5 Conquest So True, in the money in her last three, though beaten as the choice in her most recent two outings. Rafael Bejarano stays aboard for Vladimir Cerin and should have the daughter of Yes It’s True in a stalking spot, ready to pounce.

The nightcap is a maiden special weight California-bred turf miler. #7 Monterey Shale has the always-preferred two-sprints-and-a-stretch out pattern and a pedigree that suggests he’ll move up considerably in his first try on grass (Hard Spun). Bejarano stays aboard for Gaines, and a breakthrough performance is possible. The Peter Miller-trained #3 Anatolian Heart ran well when second in a Hillside turf sprint last month and with two sprints behind him should be set for another forward move in his first try around two turns. The son of Unusual Heat may be quick enough to make the running and might never look back if unpressured.  #8 Lord of Chaos, third in the same sprint that Anatolian Heat exits, has some early speed, though he might show improvement if held up early and allowed to run late. A recent bullet workout shows he’s doing well, so he’s worth tossing in somewhere.