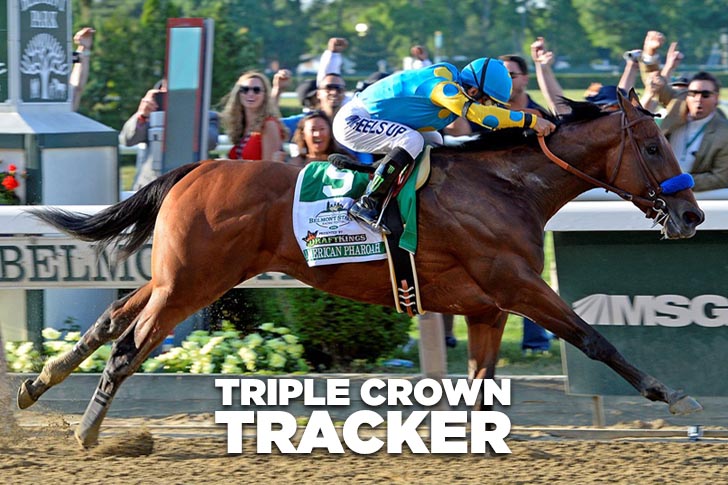 These rankings identify the best 3-year-olds of 2020 in order of preference, with each horse given a theoretical weight assignment starting at 126 lbs. based on past performance and projected development.  The horses listed are assumed to be candidates for at least one of the Triple Crown races.

Positives: Godolphin homebred; unbeaten in three starts; was successful in a highly-impressive 3-year-old bow when winning 8.5F Matt Winn S-G3 at Churchill Downs in May, drawing clear with authority close home to earn a career-top 95 Beyer speed figure despite a wide trip throughout; previously overcame a slow start to rally from 10th over a mile to win his debut at Churchill Downs in September of his 2-year-old season and then buried a representative field by more than five lengths in the Breeders’ Futurity-G1 the following month with a similar off slowly/rally wide trip; has an exceptional turn of foot and is bred to stay the Derby trip and beyond; was arguably the most talented juvenile of the 2019 crop.

Concerns: Missed the Breeders’ Cup Juvenile after showing signs of lameness and subsequently had an ankle chip removed in November that required two months of rest; almost certainly would not have been ready for the Kentucky Derby-G1 had the race been staged on its original date; will enter the Belmont Stakes with just one prep race behind him but produced a massive 20-point speed figure improvement when faced with a similar pattern last fall.

Positives: $110,000 Saratoga yearling; winner of four of five career starts, most recently 9F Florida Derby-G1 in late March by 4 1/4 lengths; among his other victories were the 8F Champagne S.-G1 during his juvenile campaign and 8.5F Holy Bull S. (career top 98 Beyer figure) in his 3yo debut; owns an excellent stalking style and can manufacture a powerful late-kick; pedigree and running style suggests he’ll adapt to any distance or race-flow; among many top prospects from his spectacular first-crop sire; had excuses for only defeat (in Ky. Jockey Club S.-G2).

Concerns: Questionable on an off track (was third at 3/5 over sloppy track at Churchill Downs); was subjected to an ill-advised ride (or strategy) when wrangled back early in Holy Bull S. but managed to easily overcome it; will be making next start (in Belmont S.-G1) off a nearly three month layoff but has looked terrific in recent workouts and shows form that suggests he runs best fresh.

Positives: $700,000 Keeneland yearling; unbeaten in three starts, most recently winning the Arkansas Derby-G1 (1st. div) by six widening lengths (time was .15 seconds slower than Nadal’s victory in 2nd div.); previously had invoked memories of Triple Crown winner Justify’s first race in his debut almost exactly two years later when blazing to a 5 ¾ length victory and earning an off-the-charts 105 Beyer speed figure before demolishing a first-level allowance in a two-turn mile by 11 ¼ lengths the following month; powerful colt but with enough length and scope to stay at least a middle distance; blessed with immense natural ability and should continue to develop with experience and maturity.

Concerns:  Though he was drawing away in the final stages of his Arkansas Derby-G1 win, his final furlong of 13 1/5 seconds was no better than average and creates some doubt as to his ability to stay the Derby’s classic trip; connections considering the 7F Woody Stephens S.-G2 in lieu of the Belmont Stakes-G1 due to distance considerations; was quick enough to become the controlling speed in each of three his victories and thus must considered a need-the-lead type until proven otherwise.

Into Mischief – Flawless, by Mr. Greedy

Positives: $350,000 Keeneland yearling; unbeaten in three starts, was straight and true when earning a career-top Beyer speed figure (98) in a dominating 8.5f San Felipe S.-G2 victory to remain unbeaten while verifying the promise he displayed when an eye-catching 7 ¾ length winner of the 8f Sham S.-G2; athletic colt with substance; may be just scratching the surface of his immense talent; in hands of a two-time Triple Crown trainer.

Concerns:  Sire gets mostly milers and therefore he is no sure thing to excel at a classic distance; unfocused when lugging in badly through the stretch in his Sham S.-G3 win though he displayed none of those antics in his subsequent San Felipe S.-G2 score; each of his three wins have been accomplished on the lead and therefore has to prove he can be receptive to rating/stalking tactics or cope with kick back if and when the situation demands.

Positives: $850,000 Saratoga yearling, made his first start since September (and just his third overall) in the San Felipe S.-G2 in early March and performed admirably, racing within range to the head of the lane and then staying on gamely to be second to Authentic while 3 ½ lengths clear of BC Juvenile winner Storm the Court; seems likely to improve with this race under his belt and will get another crack at Authentic in the Santa Anita Derby-G1, though he will be returning off a three month layoff when he gets that chance; should have no trouble handling a classic distance; has produced a forward move according to his Beyer figures in each outing and already is pretty fast (95 Beyer in last) as it is.

Concerns: At this stage he may not own an electric turn of foot, possibly being cut more in the mold of a high class stayer; lacks seasoning and experience (just three career starts); has displayed more potential than production so far but also may have upside that some of the other contenders do not possess.

Positives: $20,000 OBS April 2-yar-old; steady late bid to finish a willing but distant second (to 50-1 King Guillermo) in highly-rated 8.5 Tampa Bay Derby while appearing to want more distance; previously had produced an exciting late kick from 15 lengths back to win the 8.5f Sam F. Davis S.-G3; sire was a turf miler but this gelding gives promise of developing into a legitimate staying stretch runner; genuine, consistent, and dependable.

Concerns: May actually be more effective on turf than dirt; fast early splits contributed to his deep-closing win at Tampa Bay; will enter the 9f Belmont Stakes-G1 following a three-month layoff while being lightly-trained in the interim; lacks tactical speed and may be pace dependent.

Positives: $400,00 Keeneland yearling; overcame a less-than-ideal trip (in traffic most of the way) to win the listed 8.5F Unbridled S. at Gulfstream Park in late April in just his third career start, exerting his superiority in the final sixteenth to register 1 ½ length victory while appearing to do his best work when clear in the final stages; had defeated maidens over 7 furlongs the previous month while powering home from mid-pack to earn a spectacular 96 Beyer speed figure; had one run as a juvenile, finishing fourth at odds-on in a 5.5F maiden sprint at Belmont Park July 4 before being stopped on; turned heads in a workout May 30 at Palm Beach Downs when easily leaving stable mate Gouverneur Morris far behind; lightly-raced with plenty of upside and seems sure to improve with experience, maturity and distance.

Concerns: Lacks experience and surely will be tested when facing the higher-rated members of his class; not the handiest of runners and may be susceptible to traffic and other negative trip issues in larger fields; has yet to accumulate any Derby points though he’ll have plenty of opportunities during the summer; more promise than production so far but his potential is intriguing.

Positives: $150,000 OBS April 2-year-old; finished three lengths second in the slightly faster division of the 9F Arkansas Derby-G1 behind Nadal in a solid performance, always within range and keeping to his task without really worrying the winner; had improved dramatically when a thoroughly dominant winner of the Tampa Bay Derby-G2 in his previous outing in early March while employing an effective pace pressing style; strong speed figure legitimized the outstanding effort; broke his maiden as a two-year-old on grass to underline his versatility; will by-pass the Belmont Stakes-G1 for a less challenging assignment, good stalking style with further improvement likely.

Concerns: Lightly-raced with just two well-spaced outings in 2020 and will be off again until sometime in the summer; no workouts recorded during the month of May; either his connections are simply being conservative or the colt requires a delicate touch.

Positives: $80,000 Keeneland yearling; pressed the pace but weakened under pressure when third in the 9F Florida Derby-G1 in late March in what must be considered a slightly disappointing effort (his Beyer speed figure dropped 8 points) while perhaps displaying distance limitations; isn’t scheduled to return until mid-July in the 9F Haskell Invitational-G1; previously had displayed superior gate speed to quickly establish the pace from an extreme outside draw in the Fountain of Youth S.-G2 and then dominated throughout to earn a career top speed figure; versatile colt has won on turf and dirt, and from off the pace and on the lead.

Concerns:  Suspect at distances at nine furlongs and farther based on his fading third in the Florida Derby-G1; understandably was unable to contain stretch-running Tiz the Law but never could get past pace adversary Shivaree; had a busy winter (four races in three months) and may benefit from a less aggressive summer schedule; pedigree suggests he’ll eventually prove to be most comfortable on grass.

Positives: Improving with each outing, most recently when an excellent runner-up (by one length to Maxfield) in 8.5F Matt Winn S.-G3 in late May, pressing the pace throughout and staying on gamely though unable to match strides in the final stages with the late-charging winner; Beyer number (95) was a career top, six points better than what he was assigned when second to front-running Wells Bayou in the Louisiana Derby-G2 the previous month; New York-bred colt has excellent tactical speed that usually produces a clean trip; genuine and consistent.

Concerns: Yet to win a stakes race and is questionable at distances of nine furlongs and farther; both wins were accomplished on the lead and all of his good efforts has been accomplished in races with a moderate early fractions; has a tendency to drift out under pressure in the late stages; would clean up in state-bred stakes if allowed to take that path.