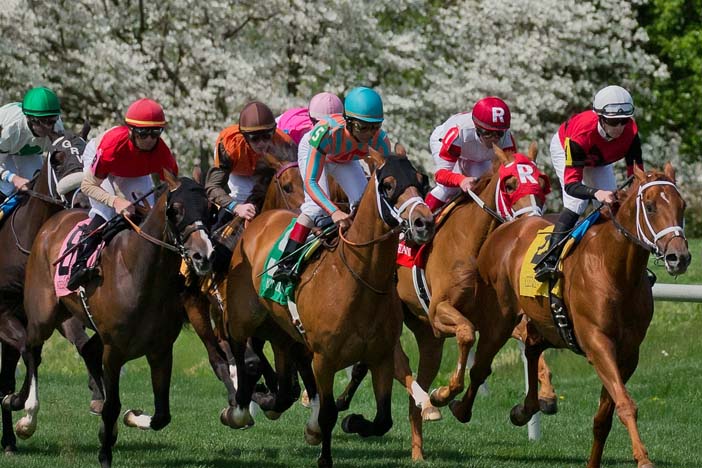 FIFTH RACE – Let’s take a chance on a price chance in this all-weather two-turn event for older maidens. Defensible, listed at 10-1 on the morning line, was given a run in an abbreviated sprint at Laurel Park last month and should be more serious today. Though he was never 26 lengths behind as the running line shows (more like 15), the son of Blame lacked early speed, found his best stride entering the lane and was going best of all in the closing stage before galloping out full of run. A $400,000 yearling purchase trained by Graham Motion, he’s a half-brother to two stakes winners and seems certain to improve with experience, distance, and maturity. The switch to the barn’s “go-to” rider Luis Saez is another positive factor, so in a field with no world beaters he should be capable of improving enough to have a reasonable look.

SEVENTH RACE – Here’s a stronger-than-par allowance optional claiming sprint for juvenile fillies. Let’s go with Jumeirah on top as she tackles an easier group after three successive outings in added money competition, most recently when finishing a fading sixth in the listed Myrtlewood Stakes at Keeneland in late October. A sharp debut maiden winner at Monmouth Park last summer and then a respectable runner-up in the Sorority S., the daughter of Twirling Candy adds blinkers for the first time (she’s looked quite sharp in the a.m. while wearing the hood), lands the cozy outside post, and is reunited with the barn’s main guy Junior Alvarado. Likely to employ stalk-and-pounce strategy, the Carlos David-trained two-year-old has an edged in speed figures, so it all adds up to a value play at 5/2 on the morning line.

Recent maiden-special-weight winner Mi Negrita probably is worth including on a ticket or two as a back-up. She was a visually pleasing winner in a one-turn mile affair over the local main track in late October, has trained well since, and shouldn’t be inconvenienced by the turn back to a sprint, though her rail post probably does her no favors. Projected to inherit a ground-saving, stalking position, the daughter of Bodemeister may have a look if she can continue her improving pattern despite the step up in class.

NINTH RACE – Not sure how comfortable Divine Leader will be in his first try on grass, but if the John Ennis-trained shipper can reproduce his main track form – specifically his dominating dirt win at Churchill Downs last month – the four-old gelding should be able to continue his winning ways in this allowance optional claiming five furlong dash. Drawn comfortably outside (as he was in his last time out), the son of Will Take Charge is plenty quick from the gate but doesn’t need the lead to win, so Luis Saez can assess the pace flow and adjust accordingly. On pure numbers he’s the fastest horse in the race, so the only concern, really, is the surface switch. However, at 9/2 on the morning line he’s certainly worth the gamble.