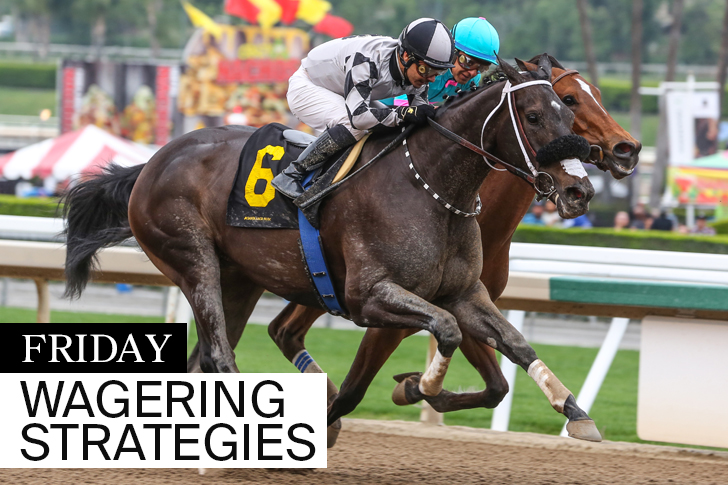 “What You Need to Know” – Santa Anita
by Jeff Siegel, 1stbet.com Handicapper & Analyst

Specifically designed for the rolling exotic player, Jeff Siegel’s Daily Santa Anita Handicapping Analysis, Wagering Strategies, and Workout Commentary identify those horses that should be included in daily doubles, pick-3s, pick-4s, pick-5s, and the pick-6.
*
For additional commentary, follow us on twitter @jsiegelracing.

Forecast: Double Fantasy takes a realistic class drop from a much tougher starter allowance $32,000 affair to this restricted (nw-3) $20,000 sprint for fillies and mares and seems to have found a proper spot to regain her winning form. She was a voided claim for $16,000 when winning two races box at Del Mar but we suspect she’s reasonably sound at this time and ready to reproduce her best effort. Comfortably drawn outside and with multiple speed figures that are better than par for this level, the lightly raced mare should be able to settle in the second flight outside and then wear down the leaders late. For protection, you can include Unwritten Code on your ticket as a backup or a saver. She won a softer (nw-2) $12,500 last time out with a career top speed figure, but her performance may have been promoted considerably by a wet fast track. She’ll be part of the early pace and will be dangerous if she can turn in two alike.

Forecast: Wudi may have been a tad short when worn down late by the talented Lily Poo in her debut last month at Del Mar (she finished more than four lengths clear of the rest) but she has returned to breeze very well for trainer Bob Baffert (32% with second-time starters) and seems certain to produce a significant forward move in this maiden sprint for sophomore fillies. The daughter of Uncle Mo switches to Johnny B., adds Lasix (they all do now that they’ve turned three) and rates a slight edge on top in a race in which the contention stretches from top to bottom. Baffert’s other starter, Doinitthehardway, has the route-to-sprint angle that we like and also is returning to the maiden ranks after finishing a respectable fourth in the Starlet S.-G1 at Los Alamitos last month. She should be running on late. Teena Ella displayed excellent speed to the top of the lane in her debut at Del Mar in November before hitting the way and faltering, but she continues to impress in the morning and may employ stalking/pressing tactics from her cozy outside draw. It would be surprising if Beholder’s daughter doesn’t step forward in a big way.

Forecast: High Heater drops considerably in class but remains above his claim level and switches to Flavian Prat, so this certainly looks like the money for the Bob Hess, Jr.-trained gelding in this $16,000 main track miler for older horses. A repeat of his sharp runner-up effort two races back over this track and distance in early November should be more than good enough to beat this field. The one to fear most is the late running Big Buzz, a two-time winner (from just four starts) over the Santa Anita main track and with several back speed figures that make him a strong fit at this level. Most effective when held up early and allowed to run late, the son of Mr. Big switches to Hector Berrios and seems certain to receive the patient ride he requires.

Forecast: Yo Time was knocked down to favoritism in a similar maiden state-bred dirt sprint at Del Mar in his debut in late November but got behind horses inside during the early stages and appeared to resent the kick back. He adds Lasix, draws a better post, and may run to expectations this time around. The son of Smiling Tiger probably has more gate quickness than he displayed, and it wouldn’t surprise us to see him on or near the lead throughout. Thirsty is a first time starter that went through the ring as a yearling for $97,000. The son of Stay Thirsty has put together a solid work tab at San Luis Rey Downs for trainer Peter Miller and could come up a live item, so we’ll also include him on our main ticket.

Forecast: Ardis should be too quick for these if she can duplicate either one of her last two races. The daughter of Mohaymen displayed much improved early speed when rolling to the wire as much best in an abbreviate sprint two runs back at Del Mar and then finished second in a hot race at Los Alamitos in her most recent outing. The concern is her consistency and dependability; she has a share of clunkers on her resume, so it would be prudent to have some protection in rolling exotic play. Rain Diva has plenty of early speed and a stalk-and-pounce strategy will be available if her connections choose to employ it. However, she is drawn inside her pace rival, and it is possible that they hook up early and do each other in. The best of the closers may be Righteously, a “must use” with the switch to Flavian Pratt. The problem is that she is winless in seven starts over the Santa Anita main track (but with six wins elsewhere), and while she sports a solid, healthy work tab for her first start since October she just might not care for the local surroundings. We’ll toss her in, nonetheless.

Forecast: Haskelled seems sure to employ gate-to-wire tactics from his favorable inside post in this bottom-rung maiden $20,000 claiming miler in his first try around two turns and his first for a tag. The switch to Flavian Pride guarantees he’ll be heavily backed, even though this $140,000 yearling purchase clearly indicates is being culled from the stable. He is listed at 6/5 on the morning line for a reason: a lack of a viable alternative in the field. Tread lightly here.

Forecast: Little Rachel moves up two notches on the claiming ladder after being haltered by a low profile but very capable outfit, and this three time Santa Anita main track winner may hold a slight edge in this $32,000 claiming sprint for older fillies and mares that demands considerable coverage in rolling exotic play. Drawn nicely outside and reunited with Juan Hernandez, who has ridden her to victory on several occasions, the veteran daughter of Tapiture projects to settle in mid-pack and then have clear sailing when asked to accelerate from the quarter pole home. She was a voided claim two races back, but we’ll proceed under the assumption that she’s in good enough shape now. La V. is another that clearly prefers the local main track (never off the board in four starts), and after being worn down late in a slightly softer affair last fall, she returns off the bench with a solid work tab that should have her ready for a major effort. She returned off a seven money layoff to win last spring, so we know she can fire fresh. Miss Fia has several back numbers that make her a fit in this league and has proven to be quite capable on any surface (dirt, turf, wet). She’s another returning off a vacation with past success off the bench and likes this dirt strip, having finished in the money in each of her seven career starts at Santa Anita.

Forecast: The conditions of this maiden sophomore sprint restrict entry to those that went through the ring at auction for $150,000 or less, or are entered to be claimed for $62,500, meaning the first time starter Motorcade is perfectly spotted, having sold for that top price at the 2022 Fasig-Tipton July sale. The son of Accelerate certainly has looked the part in his morning drills for John Sadler, appearing plenty fit and with enough raw talent and speed to be very competitive in a field such as this. The barn traditionally has solid stats with debut runners, though not lately, but perhaps this colt is good enough to buck the trend. Juan Hernandez rides a lot of live newcomers for this stable, so at 6-1 on the morning line there is plenty of wagering value available in the win pool and in the various rolling exotics. The $500,000 yearling purchase Nullabor is entered for a tag despite having just two starts, so clearly the barn isn’t very high on him. While the Bob Baffert-trained colt clearly has been a disappointing, the son of Curlin should make his presence felt against this group, especially with the route-to-sprint, class drop angle and the addition of Lasix.