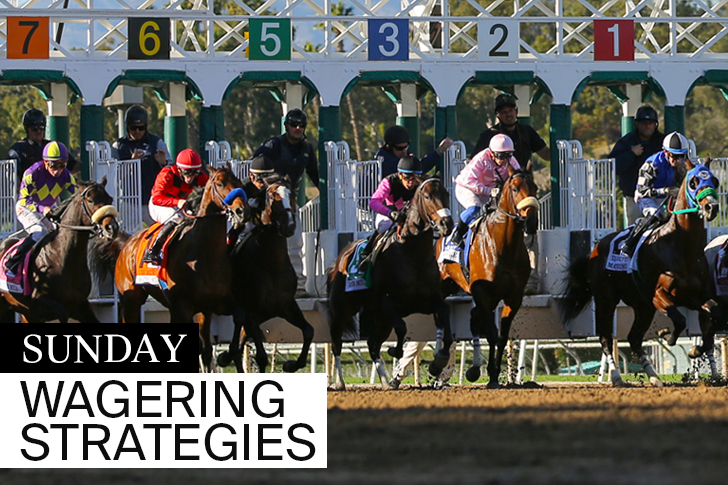 Forecast: Florida invader Havana Love (TOC=12-1; ML=6-1) is quite interesting in this second-level allowance turf sprint for fillies and mares. An Italian stakes winner when mostly competing over a middle distance, she appears to have plenty of early zip and could display significant improvement while turning back in trip in this six furlong affair. In a race that projects to have moderate early fractions and based on what we’ve seen of her in the morning, she could easily be quick enough to be on or near the lead throughout. Unbridled Mary is a late-runner returning from Kentucky where she finished a close fifth in a listed stakes while earning a career top speed figure. The daughter of Maclean’s Music shows a healthy series of local dirt works to have her fit following a six week respite, so if she can get some help up front the J. Sadler-trained sophomore should be heard from late. Havana Love gets top billing but both should be included in rolling exotic play.

Havana Love (May 14, Santa Anita, 5f, :59.1hg). Grade: B+
Loved this work from Florida invader now in D. O’Neill barn, splits of :24 flat, :35.2, :47.1 and :59.1, mostly on her own while best over Still on the Books (5f, :59.4hg). Appears to have plenty of natural speed (she was stakes-placed sprinting overseas as a 2-year-old) and may be allowed to show it if shortened up. Had useful Italian form and should be quite competitive on this circuit.
View Workout Video

Forecast: Fordy G missed his scheduled debut last week when he was a late scratch but obviously is none the worse for wear as he reappears eight day later in this four and one-half furlong affair for juveniles. The son of American Freedom has displayed plenty of quickness in a.m. drills and could clear the field from the rail, assuming he breaks well. Tahoma, from the first crop of Justify, shows a local gate work (see below) that was solid if not spectacular. Whatever he can do today, he’s most likely to do better down the road as the distances increase.

Tahoma (May 16, Santa Anita, 4f, :47hg). Grade: B
From the first crop of Justify, juvenile went three ticks slower than given on our watches while even with Henry Q (same time), ridden a bit most of the way while earning splits of :23.3, :35.1 and :47.3 for D. O’Neill. Decent work, not earth shattering, but seems fit enough and should make the entries soon and will have a look if not world beaters show up.
View Workout Video

Forecast: Paid Informant (TOC=2/5; ML=Evens) really doesn’t look like a “healthy” odds-on favorite – she’s even money on the morning line and likely will go lower – but in the absence of a viable alternative the D. O’Neill-trained mare is the top pick by default. Following 10 month layoff, she returned protected in a starter optional claimer and ran very well to be third after a rough trip but today she surfaces in a $25,000 event and is clearly “for sale.” If the daughter of Into Mischief has one good one left she’ll take of business, but this suspicious pattern makes her almost unplayable at the short price she’s sure to be. You can use her as a no-value rolling exotic single or better yet just pass the race.

Forecast: Here’s a six-runner field with nothing to embrace. Rolling exotic players should use as many as they can afford to. Here Comes Ralphie (TOC=5-1; ML=5/2) may be as good as any. She takes a slight but significant drop into a woefully weak race and based on her recent speed figures should be capable of producing the last run. Most of her recent races have been on turf or synthetic but the daughter of Lakerville shouldn’t have a problem with the main track, at least against this group. Kelani Kim (TOC=2-1; ML=2-1) looks like the controlling speed after displaying early speed but then fading in her comeback race last month at Turf Paradise. This return to the claiming ranks is warranted but as a six year old mare with just seven career starts she’s clearly had her issues. Mo Connelly (TOC=7/2; ML=8-1) broke her maiden over this track and distance two races back but then was out of her element and far back vs. starter’s allowance foes on grass in her most recent outing. This is a field she can act with, so at 8-1 on the morning line she is worth tossing in on a ticket or two.

Forecast: Older maiden California-bred fillies and mares sprint six furlongs on grass, with the second-time starter Summer Lake quite appealing after being given a run at 30-1 last month in her debut when facing similar company. Allowed to lag to the top of the lane, the daughter of Lakerville responded when asked a bit in the final furlong to close a gap without threatening, splitting the field while beaten less than five lengths. We’re expecting a much more serious effort today. K. Frey got to know her and stays aboard, so at 6-1 on the morning line, the B. Heap-trained filly is worth a gamble in the win pool and in the various rolling exotics.

Forecast: Here’s another somewhat messy restricted (nw-3) claimer, this one for $20,000 older sprinters. Doc Adams (TOC=6-1; ML=5/2) is a first-time gelding taking a significant class drop and turning back from a series of two-turn outings. A prior winner over the Santa Anita main track, the son of Vronsky seems most effective when held up early and allowed to run late, and at this extended sprint trip the A. Harris-trained four-year-old seems primed for major effort. Weston (TOC=4-1; ML=8-1) is drawn comfortably outside, exits a stronger than par race, has numbers that fit, and projects to enjoy a clean, stalking journey and then have every chance from the quarter pole home. Verragio (TOC=6-1; 3-1) has won two of five starts, most recently earning a career top speed figure when winning a $25,000 non-winners of two sprint in mid-March. He’s eligible to produce another forward move and projects to be part of the pace throughout.

Forecast: This 10-furlong grass event attracted just five starters, and as the saying goes, top to bottom a chance. Cash Equity (TOC=9/5; ML=8/5) finished second in his U.S. debut last month in a race in which he enjoyed an ideal trip, had every chance when set down for the drive but then failed to produce the necessary late kick and in fact appeared to lose some of his punch late. The question is, will he step forward off that effort today, and if so, how much? The P. D’Amato-trained colt seems a bit of an underlay at his morning line of 8/5, but he certainly could win and must be included in rolling exotic play. His D’Amato-trained stable mate, the multiple graded stakes winner Red King (TOC=3-1; ML=5/2), is eight years old and may have lost a step, so this drop into an optional claimer ($80,000) seems warranted. He’ll be running on late, but in a race that projects to be slowly run early, the race flow isn’t likely to compliment his style. Seven Charms (TOC=6-1; ML=7/2 is lightly-raced and unproven at this level but he may inherit a very easy front-running trip and get brave. In a race in which the major players aren’t completely trustworthy, he’s worth including on your ticket.

Forecast: Bottom rung ($20,000) maiden claimers meet over a mile, with King Rob deserving of top billing based on his most recent outing, a runner-up in a similar affair earlier this month that produced a career top speed figure. Can he turn in two alike? If so, he can win. Chris Fix stretches out following a series of sprints and should be forwardly placed. However, He’ll need considerable improvement in the speed figure department to challenge our top pick if that one reproduces his last outing. With nothing else to embrace, we’ll sink or swim using just these two in our rolling exotics.

Forecast: Dancing Soul didn’t get the best of runs in her debut up north at Golden Gate Fields – she was squeezed back at the start and was wide throughout – but kept to her task to wind up second in a promising effort. She goes for a barn that has solid stats with the second-time starter angle and is bred for grass on both sides of her pedigree, so we’re expecting the daughter of Vronsky to produce a significant forward move. Magic Game received no action (37-1) in her debut but ran well when staying on nicely through the lane to finish second in a similar turf sprint last month. The daughter of Flintshire is another likely to improve with that bit of experience behind her, and if she can secure a decent early position from her outside draw the E. Kruljac-trained sophomore should find this group within her capabilities. A healthy work pattern at Los Alamitos indicates improvement is likely. Both should be used in rolling exotic play with a slight preference on top to Dancing Soul.