Preview of the Astra Stakes at Santa Anita Park on...

Beyond Brilliant Worked 4 Furlongs in 48.20 at Santa Anita... 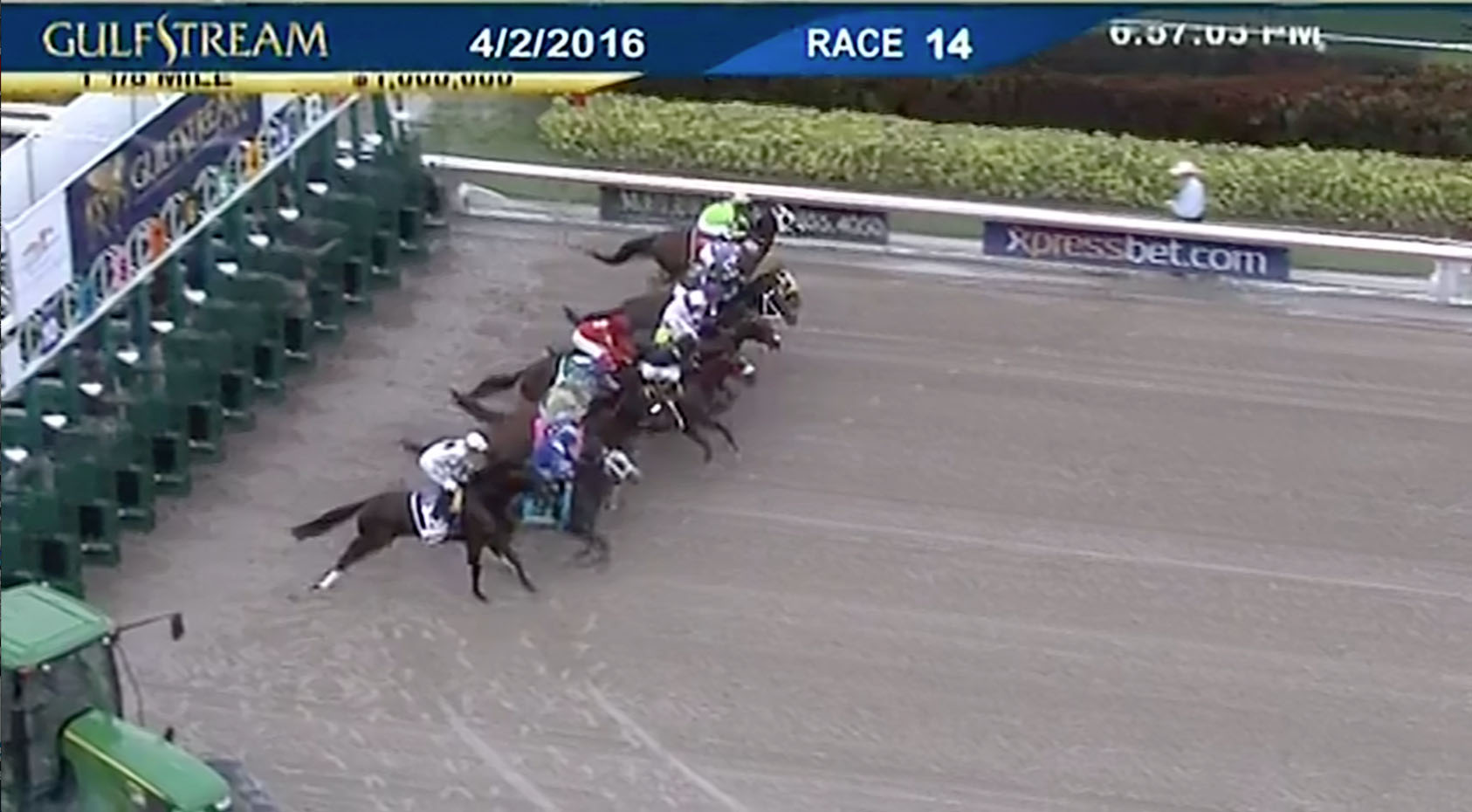 As usual, horseplayers and fans alike ought to digest such hors d’oeuvres with a proverbial grain of salt. No trainer’s ever attempted to match Joe Willie Namath’s Miami poolside Super Bowl prognostication, but it would be nice if one did. Instead, most conditioners follow the conservative route, underplaying their horse’s chances, while overplaying the competition’s talent.

How are trainers supposed to respond when asked to react to already assigned post positions? Should they cry over spilled milk? What good would that do?

Most connections know that it’s best to pretend that the trick fate just played on them–by trapping their speed horse on the rail inside of three other runners who absolutely, positively must have the lead–is exactly what they had anticipated and that such misfortune will not affect their horse in the least.

Players know better. So do other trainers. And jockeys.

It’s at times like these when trainers speak in code. However, experienced horseplayers (and opposing horsemen) know how to crack the encryption. Feds originally thought they needed a court order to get behind the iPhone wall, but interpreting trainer-speak is much easier…more like breaking into a child’s piggy bank.

Below is a Gulfstream Park press release from Wednesday, including official trainer comments following the post position draw for the $1 million Xpressbet.com Florida Derby. After each official quote is an interpretation of what one horseplayer assumes each trainer actually meant to say, but didn’t.

Trainer Kiaran McLaughlin (Mohaymen – 9): “We’re pleased to be outside of Nyquist. We just wanted to be outside of him, for one, and two, hopefully we’ll stay out of trouble being outside a little bit. It will give [jockey] Junior [Alvarado] an opportunity to ride his race and be out in the clear.”

“Hopefully [the bigger field] won’t be a negative with traffic issues. It shouldn’t be a problem; six or 10 horses there’s not a lot of difference. Hopefully we break well and we’re out in the clear a little bit, not too wide, and go from there. There’s not any negatives. We’re positive and happy. We’d much rather be in the nine than the one-hole.”

Hopefully, because we’re outside we’ll stay out of trouble. It will give (jockey) Junior (Alvarado) an opportunity to ride his race and be out in the clear instead of having every other jock between the rails looking to trap my horse like a rat. We’re positive and happy…for now. Check back after the race.

Trainer Doug O’Neill (Nyquist – 4): “It’s hard to gauge. Prior to the draw, we didn’t know if there’d be a bad post for him. Number four is just fine. Like the rest of them, we have to leave the gate running and get good position.”

(On Mohaymen’s even-money favoritism) “I think Mohaymen has home-court advantage and he is every professional handicapper’s pick from what I’ve read. He’s the Derby favorite to this point. We’ve got to beat him to earn our respect that way.”

What Trainer Doug O’Neill (Nyquist – 4) Meant to Say: Refresh my memory, please. Didn’t my horse win the Breeders’ Cup Juvenile after breaking from the far outside…like way outside…from Keeneland’s parking lot? You think after that experience I’m ever gonna worry about a post position draw with this horse?

(On Mohaymen’s even-money favoritism): Way I look at it favorites lose about seven out of every 10 races, so favoritism’s really no bargain. True, Mohaymen’s got home field advantage, but my horse hasn’t found a track he dislikes. The next time he loses will be the first. Mohaymen is every professional handicapper’s pick, but since when has that ever been a positive? Way I see it, my horse is the champ and you ‘gotta knock the champ out to win the title.

Trainer Dale Romans (Takeittotheedge – 7): “This is the time of year, and this is a really good horse. It’s a strong Florida Derby field—you’ve got the two best horses in the country. They usually all wait until they get to Kentucky, so it’s going to be very interesting. But we have a horse with a lot of talent. It’s the time of year—you’d hate to have him run big in just an allowance race. We can always back him up. His maiden race was so impressive, he did it on the lead and he did it with his ears pricked; it looked like he was just galloping. It’s a lot different competition here, but speed is always dangerous. He should be in front and we’ll see if he’s good enough to hang on, get a check and get some points.”

What Trainer Dale Romans (Takeittotheedge – 7) Meant to Say: This is the time of year, and this is a really good horse. What? Don’t laugh. You ever seen lightning strike? You’ve got the two best horses in the country and what they’re doing running against each other now instead of in the Kentucky Derby a month from now I don’t know. Maybe they’ll get so preoccupied with each other someone else can sneak by and upset the apple cart. This is the time of year. We probably don’t have a chance in hell to win this race, but you never know. Keen Ice beat American Pharoah and ain’t picked up his feet much since, so it can happen. Did I mention that this is the time of year? Besides, a third or fourth-place check’ll be enough to pay airfare to Hong Kong.

Trainer Gustavo Delgado (Majesto – 3): “Post position number three is very good. He is toward the middle and not outside; the only bad thing is having Nyquist next to us. He’s a very good horse, very fast. I think Majesto can go in the first flight. We will leave it up to [jockey Javier] Castellano. My horse is doing very, very, very good.”

What Trainer Gustavo Delgado (Majesto – 3) Meant to Say: Post position number three is very good. So is post position number four. In fact, number four is even better than number three because that stall has Nyquist in it. We have (jockey Javier) Castellano Saturday and at Gulfstream that man could ride a mule and win. My horse is doing very, very, very good. (In case you lost count, that’s not one, not two, but three ‘verys.’)

Trainer Jorge Navarro (Chovanes – 6): “It’s alright. We just gelded him and he’s training like a good horse. It’s a tough race, but it’s a chance my owner wants to take.”

What Trainer Jorge Navarro (Chovanes – 6) Meant to Say: It’s alright. What’s the difference? We just gelded him and he’s training like a good horse. It’s a tough race, but it’s a chance my owner wants to take. I wanted to run him for $10k and bump my win percentage up to around 30% but…hey, the owner pays the bills, you gotta let ‘em call a shot or two once in a while.

On Track with Johnny D: Nyquist Moves to Head of Class