On Track with Johnny D: See How They Ran 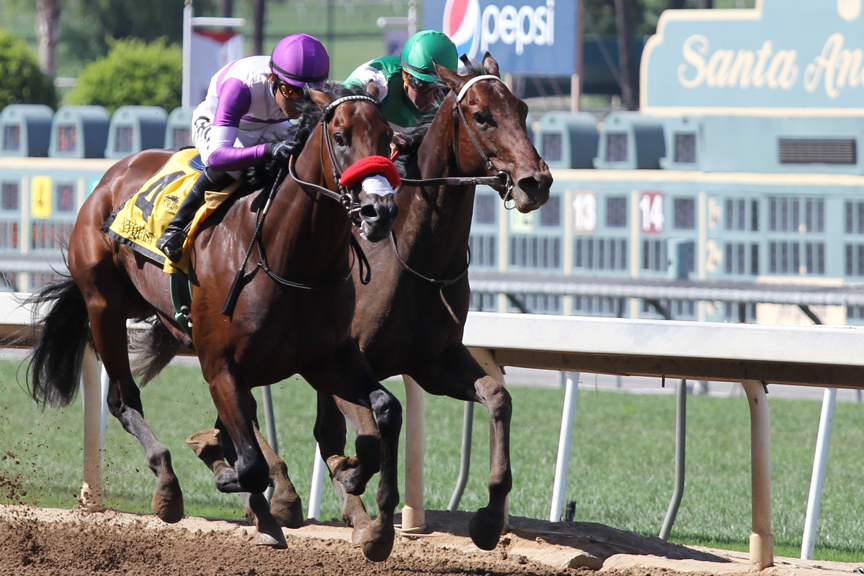 The Kentucky Derby is a bit more than two weeks away and that means it’s time to review what we’ve seen at coast-to-coast tracks in preparation for an all-out assault on Derby mutuel payoffs.

Loyal readers will recall that this horseplayer annually sets his sights on the Kentucky Derby superfecta bulls-eye. Sometimes we hit it; sometimes we miss. When we do strike the mark the payoff usually is generous. Big wagering pools and an anticipated 20-horse field make that nearly a forgone conclusion.

‘Pharoah was the 2.90-1 Derby favorite immediately followed home closest by the race’s fourth (Firing Line 9.50-1), second (Dortmund 4.30) and fifth choices (Frosted 10.30-1). ‘Chrome was an even stronger favorite than American Pharoah at 2.50-1. Third and fourth place positions behind him were occupied by fourth (Danza 8.70-1) and third (Wicked Strong 6.50) wagering choices, respectively. Longshot Commanding Curve (37.80-1) was second to juice the super.

As they say in the old neighborhood, ‘At’s what I’m talkin’ ‘bout!’

That the superfecta payoff can soar much, much higher with a wild Derby finish is not lost on this horseplayer. Admittedly it would have required a significant stroke of genius for anyone to play the Giacomo/Closing Argument/Afleet Alex/Don’t Get Mad super in 2005, but the record payoff of $864,253.50 reminds that there’s gold in them ‘thar hills.

Here’s a glance at some of the major Kentucky Derby prep races:

Tampa Bay Derby
3-12-16
Todd Pletcher-trained runners finished first and second in the Tampa Bay Derby. Second choice Destin rallied past Outwork—seven lengths clear of third-place finisher Star Hill. Brody’s Cause, the 5/2 Tampa Bay Derby favorite off a Grade 1 Breeders’ Futurity score and a third in the BC Juvenile, didn’t raise a gallop and finished seventh, beaten over 12 lengths. Destin now has won three of five starts, including his last two—the Sam Davis and Tampa Bay Derby at the Florida track. He will enter the Kentucky Derby off an 8-week respite—an unusual move for the trainer and not a very successful maneuver in overall Derby history. Destin’s stock did get a boost when runner-up Outwork returned to win the Wood at Aqueduct and also-ran Brody’s Cause took the Blue Grass at Keeneland next out.

Louisiana Derby
3-26-16
Gun Runner drew away from the rest of the Louisiana Derby field at the Fair Grounds as if he’d just stolen Emeril Lagasse’s white chef’s coat. And Gun Runner in full flight is quite a sight. He has a tendency to duck in and/or out, changing leads as he goes. However, he gets the job done. At least he did in the local Derby version and in the Risen Star. Fourth behind him in the former and third back in the latter was Mo Tom, a trouble prone son of red-hot sire Uncle Mo. The extent of Mo Tom’s ability, thought to be significant when he decisively won the LeComte in January, has been hidden behind a pair of catastrophic journeys. Reports verify that trainer Tom Amoss has successfully had the bit surgically removed from Mo Tom’s mouth. Jockey Corey Lanerie planted it there when forced to severely check Mo Tom in the stretch of both the Risen Star and Louisiana Derby. The same folks that own Mo Tom, also own Tom’s Ready, second to Gun Runner in the Louisiana Derby. The family also calls the NFL’s New Orleans Saints theirs. Tom’s Ready’s claim to fame is a previously mentioned runner-up effort to Gun Runner and two runner-up finishes to Mo Tom.

Florida Derby
4-2-16
Rain softened the going at Gulfstream Park for this season’s Florida Derby. Something else softened up favored Mohaymen because he never raised a hoof to defend his winter home turf against California invader Nyquist. Nyquist won the Florida Derby as easy as breaking sticks, ducking out a bit in the stretch as he lost interest late in the proceedings, according to his trainer and jockey. The victory locked in Kentucky Derby favoritism for Nyquist. It left Mohaymen in handicapping limbo. What’s a player to do with a runner like Mohaymen? Unbeaten in five starts, including four Grade 2 races, he melted in the Gulfstream paddock while a victim of the oppressive humidity. His race clearly was over before it ever began. More confusing is that those left in Mohaymen’s triumphant wake at age 2 and age 3 have not subsequently distinguished themselves.

Santa Anita Derby
4-9-16
The track was ‘off’ for this year’s Arcadia sophomore extravaganza. How ‘off’ is anyone’s guess—probably on a sliding scale somewhere between the uncle who gives you the creeps at family gatherings and Charles Manson. Trainer Bob Baffert insisted before and after the race that favored Mor Spirit wouldn’t like it. He didn’t. The PA bred still put his grinding style to use to manage second. Close second choice Danzing Candy probably didn’t appreciate the surface either, but it was hard to tell because his hooves weren’t spending much time on it…at least not for the first part of the race when he sped off and set fast early fractions. Down the lane Danzing Candy got to sample the goo more intently as he appeared to be stuck in one place. Exaggerator, a horse with solid form going into the race, apparently relished the surface. He skipped over it like a stone over water and came home six and one-quarter lengths best. In his previous race, the San Felipe Stakes, Exaggerator had made a similar sweeping move toward leader Danzing Candy, but had come up empty late and, in fact, had been passed by Mor Spirit. This day, on a track Exaggerator loved and others detested, the story was much different.

Wood Memorial
4-9-16
Outwork returned from a runner-up effort to stable-mate Destin in the Tampa Bay Derby to win the Wood over an ‘off’ track. It was the slowest running of the race ever. Trojan Nation, a five-time losing maiden, finished second by a head. Now, the ‘off’ track may have messed things up, but we’re passing on runners coming out of the Wood headed toward the Kentucky Derby.

Blue Grass
4-9-16
Brody’s Cause rebounded from a horrible performance as favorite in the Tampa Bay Derby to outfinish My Man Sam and fellow Dale Romans barn-mate Cherry Wine to win the Blue Grass Stakes at Keeneland. ‘Cause had a maiden win, a Grade 1 tally and a third-place in the BC Juvenile Stakes on his resume before the Tampa Bay debacle. Overall, the Blue Grass field was not as deep as some other prep races, but runner-up My Man Sam ran admirably to finish second after a wide trip that began from post position 14!

Arkansas Derby
4-16-16
Cupid, trained by Oaklawn Park graded sophomore stakes magician Bob Baffert, was heavily favored to extend his trainer’s domination of Hot Springs events with impunity in the Arkansas Derby. Unfortunately for the white-haired conditioning wizard, Cupid’s penchant for breaking slowly, coupled with some roughhousing from fellow competitors, left the Rebel winner scrambling early and he never fully recovered. Following the race it was determined that he had suffered a throat issue that required surgery, but he’s okay now and headed toward a possible Preakness start. Bent on not letting any competitor walk the dog early in the Derby, as Cupid had been permitted to do in the Rebel, jockeys asked their mounts for enough to spice the early pace. That set the table for an assortment of talented closers in the field. Creator, a son of the wildly successful Tapit, roared home through the stretch, shedding bumps from competitors like Jim Brown did tacklers in the open field, to win by one and one-quarter lengths over Suddenbreakingnews. The latter, who had encountered serious traffic trouble in the Rebel, closed well on the far outside to be a solid second. Whitmore, runner-up in the Rebel and Southwest, had a rough start, recovered and finished a clear third. While the early pace of the Arkansas Derby was hot, do not make the mistake of abandoning either Creator or Suddenbreakingnews when the game shifts to Louisville. These are quality colts; especially the former and they are getting good at just the right time.

On Track with Johnny D: See How They Ran

On Track with Johnny D: What We Learned

On Track with Johnny D: It’s in the Guide