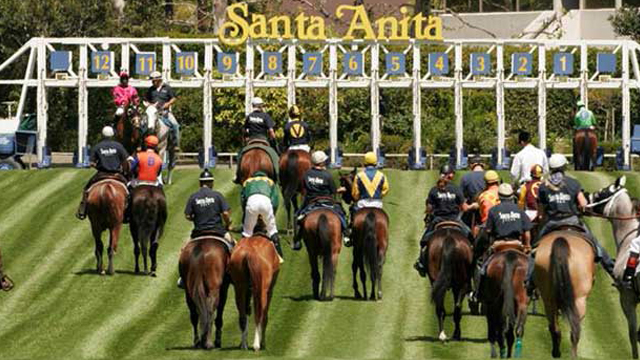 Majestic Eagle (#8, 9-5) will be tough to beat at a short price following his recent second to Fibonacci, who returned to win in impressive fashion. Majestic Eagle shortens up to a mile and catches a less than stellar field to begin the day.

Papa Joe (#9, 4-1) appears to be the only threat to the favorite. Fresh faces are always dangerous on the Southern California Turf and this colt ran very well while debuting long at Gulfstream Park. This well-bred horse adds blinkers and should be able to secure a relatively easy lead early on.

Anita G. (#6, 3-1) will be pressing Just Be Held from a cozy draw and should move forward while making her second start off a layoff. She broke slow from the inside and was rushed up last time out and seems to have improved since removing blinkers two starts back.

Just Be Held (#1, 5-2) drops to the lowest level of her career and will take this field as far as she can from the rail draw. Her 1 for 17 lifetime record is the biggest concern on the win end.

Dressed in Prada (#4, 4-1) will be the biggest beneficiary if the top two hook up on the lead. She won wire-to-wire last time out, but has shown the ability to close and pass horses late, which could go a long way in here.

Takes Two to Tenga (#3, 7-2) ran reasonably well on debut and should move forward with that race under her belt while stretching out to a more suitable distance for her style.

Mischievious Lass (#6, 2-1) returns to a sprint off a freshening for Mark Glatt. Her last race was disappointing, but her prior form puts her squarely in the mix.

Tengas Rhythm (#2, 2-1) ran well on debut against tougher and returned from a 9 month layoff to finish third at this level in a race that did not setup well for her closing style.

Naughty Sophie (#3, 7-2) debuts for Peter Miller who is 38% with first-time starters in the maiden claiming ranks. She has trained forwardly and gets in light against a field that lacks a standout.

Lets Light the Way (#7, 10-1) had a troubled debut when splitting the field going long and now shortens to a sprint. She is a bit of a wildcard, but offers great value at 10-1 in this spot.

Beautiful Becca (#2, 5-1) won down the hill in her second start, but has not gotten an opportunity to run at 6 1/2 on the turf since her win. She finally gets that chance today after making a big middle move into a fast pace last time going longer. The drop in class will only help this filly as she is the most likely winner in this sequence.