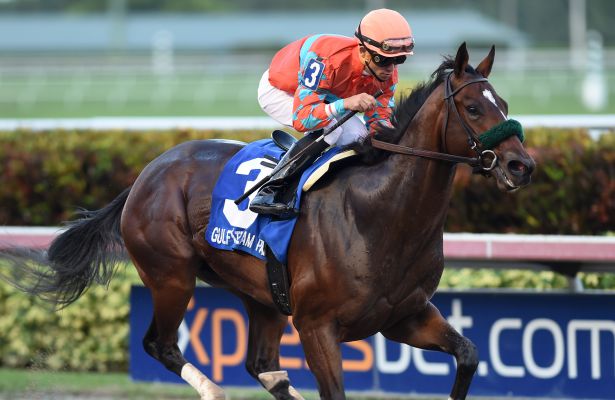 The Internet is Back !! And so is the sunshine for a challenging 12 race card on Sunday at Gulfstream Park. If you need an update on my self isolation ~ The dog is staring me down , its raining and the feral one eyed cat is in the garden under an umbrella ( not kidding ) 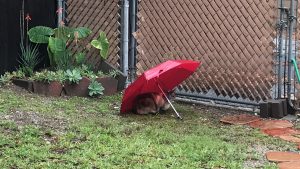 #5 INEDATEQUILA ~ TOP PICK ~ we will see what happens here as filly debuts for top connections going long on the lawn?

#10) Sunday Scheming~ will take some $$, however I’m not convinced. Showed nothing in an off the turf debut last November. Recent works have been bullets. We have a work from March 9 with Stakes winner Mae Never No < the rider on Sunday somehow lost his irons and is doing a good job without them. However the filly looks rather rotund (for want of a better word ) and unless she has really come around of late? I can see her needing one !

#6) Whiskey Sunrise ~TOP PICK ~ now gelded son of Cajun Breeze was almost good enough to win on debut last April . Comes in with a good series of workings including a Bullet solo drill March 21 in which he was full of run! …..HOWEVER that is his last official work 3 weeks ago ????? Was another work missed ?

#4) Saratoga Affair ~TOP PICK ~ This is the one I have been waiting for . A $450k purchase at OBS last April , selected by top Agent Mike Ryan, this daughter of Paynter worked 10 flat and was all class at the barn. She will only get better with distance and I think we may see a FUTURE STAR HERE ! Her work out of the gate was excellent. Broke well and always had her company measured while in hand the whole way: Mighty Road ( a $1m OBS purchase ) did not show up in Turf debut on April 9th, finishing 9th.
Workout: https://www.xbtv.com/video/saratoga-affair-(outside)-and-mighty-road-worked-4-furlongs-in/saratoga-affair-outside-and-mighty-road-worked-4-furlongs-in-49-60-at-payson-park-on-march-2nd-2020/

#5 Sixth Street ~Daughter of Tapit is a 1/2 to stakes winner My Miss Tapit. Her debut was good running 2nd at Saratoga last August from the one hole. I expect a good showing, especially coming in with a solid work tab . DANGEROUS
Workout: https://www.xbtv.com/video/sixth-street-worked-4-furlongs-in/sixth-street-worked-4-furlongs-in-49-33-at-gulfstream-park-on-february-24th-2020/

#2 Nikki and Papa ~ Finally gets to run in a MDN race. Her debut in the G3 Forward Gal was excellent, but not surprisingly, things fell apart in the G2 Davona Dale. She has been given time to recover ; however her local work (san Fanny Olsen ) was not as good as I have seen . Her rider had perhaps top much hold of her and she lugged out around the turn and through the gallop out. Good news though, jockey Fanny Olsen retains the mount !

#5 Primacy ~TOP PICK ~ Rallied furiously in debut to just miss going 6 1/2. Daughter of Union Rags out of the winless mare Humble can hope to upgrade the family tree. Comes in with a solid maintenance work with fellow daughter of Union Rags (MDN) Union Maiden.
Workout: https://www.xbtv.com/video/primacy-(outside)-and-union-maiden-worked-4-furlongs-in/primacy-outside-and-union-maiden-worked-4-furlongs-in-50-80-at-palm-meadows-on-april-4th-2020/

#2 Prairie Wings ~ ran a sold 2nd in debut to Fashion Babe for trainer Kiaran Mcglaughlin. The daughter of Tapit still wears a white bridle, but now resides with fellow D. Wayne Lukas alum Todd Pletcher . Keeps Saez in the irons (Kiaran is now his agent ) and will make a big jump fwd to a mile.

#1) Dyn ~ TOP PICK drops in class and goes dirt to turf. Son of Cairo Prince appears to relish the green stuff. Plus I have to think he needed that last start, having not had an out since last may !!
Workout: https://www.xbtv.com/video/cairo-prince/dyn-outside-and-ella-brilla-worked-4-furlongs-at-palm-meadows-on-march-30th-2020/

#7) Sole Seeker ~ has come back to work very well after a dismal 2020 debut. Drops in class and tries turf for the first time. Pedigree suggests this is a positive, being out of an Arch mare.

#7 Naked Avenger ~ TOP PICK, filly by Congrats numbers wise will need a big move fwd . Comes in with a bullet work , is proven to run well fresh . Pace aplenty in here, I think this filly who doesn’t need the lead makes a BIG move forward !!

Musings from My Grade One Couch : Gulfstream Park for April 11th