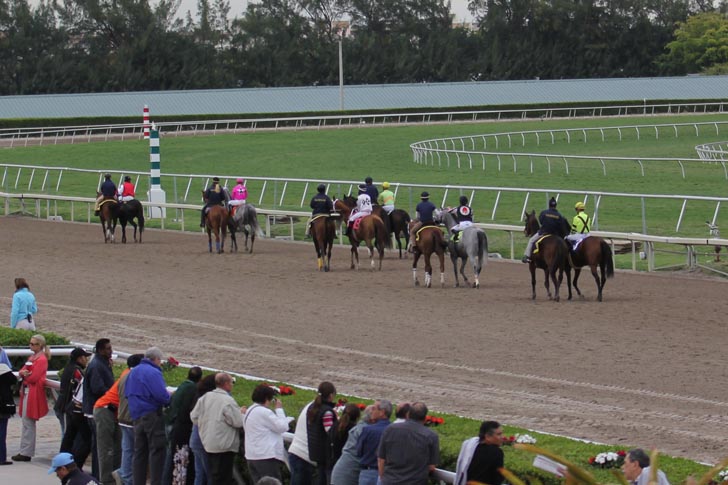 #11) Halfy 9-2  ~TOP PICK . Daughter of More Than Ready is screaming out for more ground. She was knocked around at the start of a 5 furlong MSW that will and has already produced some winners.  Wertheimers are owners and breeders and obviously feel there is little value for her? 2nd Dam is Halfbridled who like so many good race mares, has not produced herself . All winning sibs won for a tag. Filly has always been a very honest workhorse, even locking heads with Gouverner Morris last December. I refuse to believe she’s that bad !

#7 Golden Pal 7-5  ~TOP PICK ~ much like Ward’s filly on Thursday, this guy invades from KY. The first foal from the brilliantly fast Lady Shipman : note she did not win on debut on dirt, but rather in her 2nd start on TURF, just no turf racing yet for 2 year olds. Work here on April 11 is as good as it gets , but again on turf.  Have to think though that CLASS prevails.

#7 Garner State Park ~7-2~TOP PICK . Logically placed for debut by sharp trainer who also happens to be the owner along with his father, JJ Pletcher . Broke slow in that debut and was inside most of the way.  Judging by the race and her works on XBTV,  she wants no part of being inside. Drawn 7 of 12 with Saez riding back, I look for a better outcome .

#5) Fast Fraction 4-1 ~ COMES IN FRESH AND DROPS and shows a good series of works leading up to this including a bullet 47 April 4 . With the rails set at 108, this filly is very DANGEROUS !

#9 Lake Parima 6-1 ~TOP PICK , cuts in 1/2 after being close to lead and fading on debut . Picks up Tyler for a trainer who likes to race them into shape .

#11) Show Maid 12-1 The only one making that MSW drop, and yes I know it was at Tampa…but seriously those MDN races are tough, Plus her 52 Beyer speed figure is two ticks below the highest in here !  ~ PRICE

#6 Sniper Shot  6/5 ~TOP PICK ~ figures the one to beat , runs well fresh and is well placed in here …one thing that is slightly bothersome however is his spotty work pattern . No works between Feb 9 to March 2 and again March 2 to March 22.   Can he win on class alone ?? probably but I will back him up ….

#8 Mihos ~ 9-2 -I feel is waiting in the wings if Sniper Shot misses the target. I LOVE  the switch to Tyler.  Hopefully he will wake him up early and put him in the race.

Race 7) $20k N2L 5 FURLONGS TURF
No massive opinion here and not really a standout on paper , so going to take a swing with …

#3 Reservenotattained 6-1 ~  he hasn’t started since breaking his MDN July 2018 …anyway comes in with a sneaky good worktable for a trainer who has started the year off in style.

#4 Jades Gelly 5-2 ~TOP PICK ~ looks like Ward may have a good couple of days GP . This filly comes in with the shades off was a reclaim for Ward back in Jan. What is key here is she was claimed back off banished trainer Jorge Navarro . All his horses since have had to have at least 60 days since running and passed a battery of tests.  Hence (I’m sure) the layoff.

#11) Notorious RBG 3-1~ professional maiden win, by a champion out of a champion.

#5) Shippy 7-2 deserves a look.  Perhaps she can regain that dazzling Maiden breaking form debuting on turf.

#6 Fortin Hill 9-5~TOP PICK ~ Will be on many peoples tickets. But who are we using him with ?
Workout: https://www.xbtv.com/video/chad-c.-brown/fortin-hill-outside-and-instagrand-worked-4-furlongs-in-50-20-at-palm-meadows-on-april-11th-2020/

#7 Chocolate Bar 8-1 ~TOP PICK ~ one of two in here with Maker, ran a better than looked 4th whilst only being beaten 5 lengths. And comes in with a bullet fastest of 70 work .

#6 Reconvene 12-1 ~LONGSHOT ~ steady sort will handle the distance , big colt working steadily for a trainer who hits at 33% first turf !

Musings from My Grade One Couch: Gulfstream Park Analysis for April 16th, 2020