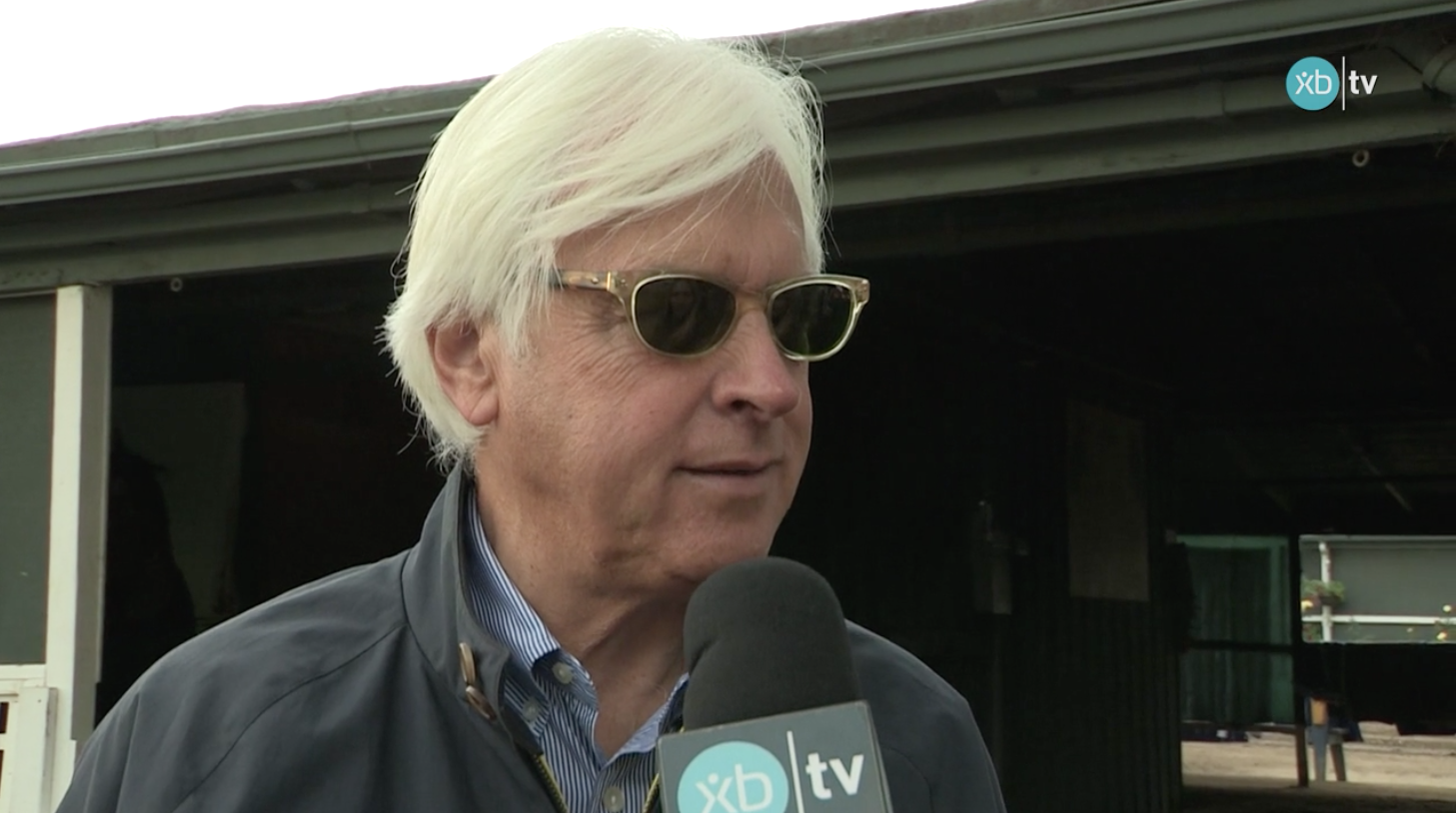 Last Saturday at Parx near Philadelphia, McKinzie won the 1 1/8-mile Pennsylvania Derby while making his first start since March 10. He thus became Hall of Fame trainer Bob Baffert’s latest 3-year-old to win a race worth $1 million or more during the second half of the year after not competing in any of the three Triple Crown events.

Baffert has had extraordinary success in the three spring classics. He’s won a total of 15 Triple Crown races, which makes him the all-time leader in this regard. Fellow Hall of Famer (and fellow ex-Quarter Horse trainer) D. Wayne Lukas ranks second with 14 such victories.

For years and years Baffert has focused on trying to win the three spring classics. Considering that, he should be lauded for what he also has been able to achieve with some of his 3-year-olds who did not run in any of the Triple Crown races, namely Arrogate, West Coast and now McKinzie.

After Arrogate in 2016 did not run in any of the three spring classics, he won two races during the second half of the year worth $1 million or more. He captured the $1.25 million Travers Stakes at Saratoga in August and the $6 million BC Classic at Santa Anita in November. Arrogate was voted a 2016 Eclipse Award as champion 3-year-old male.

After West Coast in 2017 did not run in any of the Triple Crown events, he won two races worth $1 million or more. He was victorious in the $1.25 million Travers at Saratoga in August and the $1 million Pennsylvania Derby at Parx in September. West Coast then ran third in the $6 million BC Classic at Del Mar in November before being voted a 2017 Eclipse Award as champion 3-year-old male.

And now there is McKinzie.

Back on March 26, McKinzie had a fantastic workout at Santa Anita, five furlongs in :59.40, fastest of 118 at the distance. That drill suggested it was all systems go for him to run in the Santa Anita Derby on April 7. However, a hind-leg injury that ultimately was determined to be a bruised hock knocked the colt out of the Santa Anita Derby as well as all three Triple Crown events.

McKinzie was taken out of training and given ample time to have the hind leg heal. Once the Kentucky-bred son of Street Sense resumed training during the summer when all was deemed to be perfectly fine, Baffert targeted the $1 million Pennsylvania Derby for the colt’s return to the racing wars (as I reported in this column on Aug. 1).

Ridden last Saturday by Hall of Famer Mike Smith, McKinzie sat a close-up third early while racing in the clear. He vied for the advantage around the far turn, led by one length with a furlong to go and went on to prevail by 1 3/4 lengths as the 2-1 favorite. Axelrod finished second at 10-1, while early leader Trigger Warning held on for the show at 81-1, biggest price in the field of nine. Hofburg finished fourth as the 5-2 second choice, followed in order by Core Beliefs, King Zachary, Bravazo, Mr. Freeze and Instilled Regard.

Not only did McKinzie get the job done despite the long layoff, he defeated a solid group.

Axelrod and Trigger Warning had finished first and second, respectively, in the Grade III Indiana Derby on July 14.

Hofburg was coming off a five-length win in the Curlin Stakes at Saratoga on July 27. Earlier in the year, he had finished second in the Grade I Florida Derby on March 31 and third in the Grade I Belmont Stakes on June 9.

Bravazo won the Grade II Risen Star Stakes at the Fair Grounds on Feb. 17. He later ran second in both the Grade I Preakness Stakes at Pimlico on May 19 and Grade I Haskell Invitational at Monmouth Park on July 29 as well as third in the Grade I Travers Stakes at Saratoga on Aug. 25.

Though McKinzie’s final time in the Pennsylvania Derby was a pedestrian 1:52.05, he was assigned a career-best 107 Beyer Speed Figure. The 107 ties the highest Beyer ever recorded by Justify, who was undefeated in six lifetime starts and who was retired from racing following his Triple Crown sweep.

Like McKinzie’s Pennsylvania Derby, Justify’s 107 occurred in a race in which the final time was nothing to rave about. In Justify’s case, he won the 1 1/8-mile Santa Anita Derby in 1:49.72.

But McKinzie and Justify received their 107 Beyers because in each case they ran over a surface that most people described as deep and tiring, a situation quantified by the track variant on both occasions.

Baffert’s other two Pennsylvania Derby winners also recorded a triple-digit Beyer. West Coast received a 107 when he won it in 2017. Bayern registered a 110 in the 2014 renewal.

These are the Beyer Speed Figures for winners of the Pennsylvania Derby going back to 1992:

Baffert has said that, at the start of the year, he believed he was going to win the Kentucky Derby with McKinzie. But that sentiment was before Justify burst on the scene with a scintillating 9 1/2-length win in a seven-furlong maiden race Feb. 18 at Santa Anita to give Baffert another Kentucky Derby contender.

Justify, of course, did go on to win the Run for the Roses. And it is a slam-dunk he will be voted a 2018 Eclipse Award as champion 3-year-old male. When that does happen, Baffert will make more history, becoming the first person to train four straight Eclipse Award-winning 3-year-old males, following American Pharoah in 2015, Arrogate in 2016 and West Coast in 2017.

Now that Justify’s racing days are behind him as he embarks on a new career at Ashford Stud in Kentucky for a stud fee of $150,000, the opportunity is there for McKinzie to go forward and win more lucrative races. According to Baffert, McKinzie will make his next start in either the $6 million BC Classic at Churchill Downs on Nov. 3 or the $500,000 Clark Handicap at Churchill Downs on Nov. 23. Also, the good news is Baffert has said McKinzie will continue racing next year.

The objection was sustained by the Stewards, who disqualified Monomoy Girl and placed the 1-2 favorite second, with 4-1 Midnight Bisou elevated to first.

Monomoy Girl, with Florent Geroux aboard, had the lead entering the stretch. She drifted inward in the vicinity of the eighth pole when about 1 1/2 lengths in front of Midnight Bisou. At that stage, Smith angled Midnight Bisou to the outside of Monomoy Girl.

After the Cotillion was declared official and various replays of the race were shown to the public, track announcer Keith Jones explained that the Stewards disqualified Monomoy Girl because she had denied Midnight Bisou the opportunity to run a straight course in the stretch, plus the margin between them at the finish was only a neck.

There are those who agree and those who disagree with the DQ. I honestly can see both sides. It appeared to me that Smith never stopped riding and Midnight Bisou never broke stride. On the other hand, it’s rather difficult to go by someone when they are not maintaining anything close to a straight course like Monomoy Girl during the stretch run of the Cotillion.

It’s just unfortunate whenever an important race like this has to be decided by the Stewards.

Meanwhile, I can’t help but chide the Stewards for not posting the inquiry sign. Based on what I saw during the stretch run, especially after getting even just one look at the head-on, it seems to me the inquiry sign should have been lit right away.

After Monomoy Girl’s DQ at Parx, she slipped a notch this week in the NTRA Top Thoroughbred Poll. She is No. 5 this week after being No. 4 last week.

Here is this week’s poll: