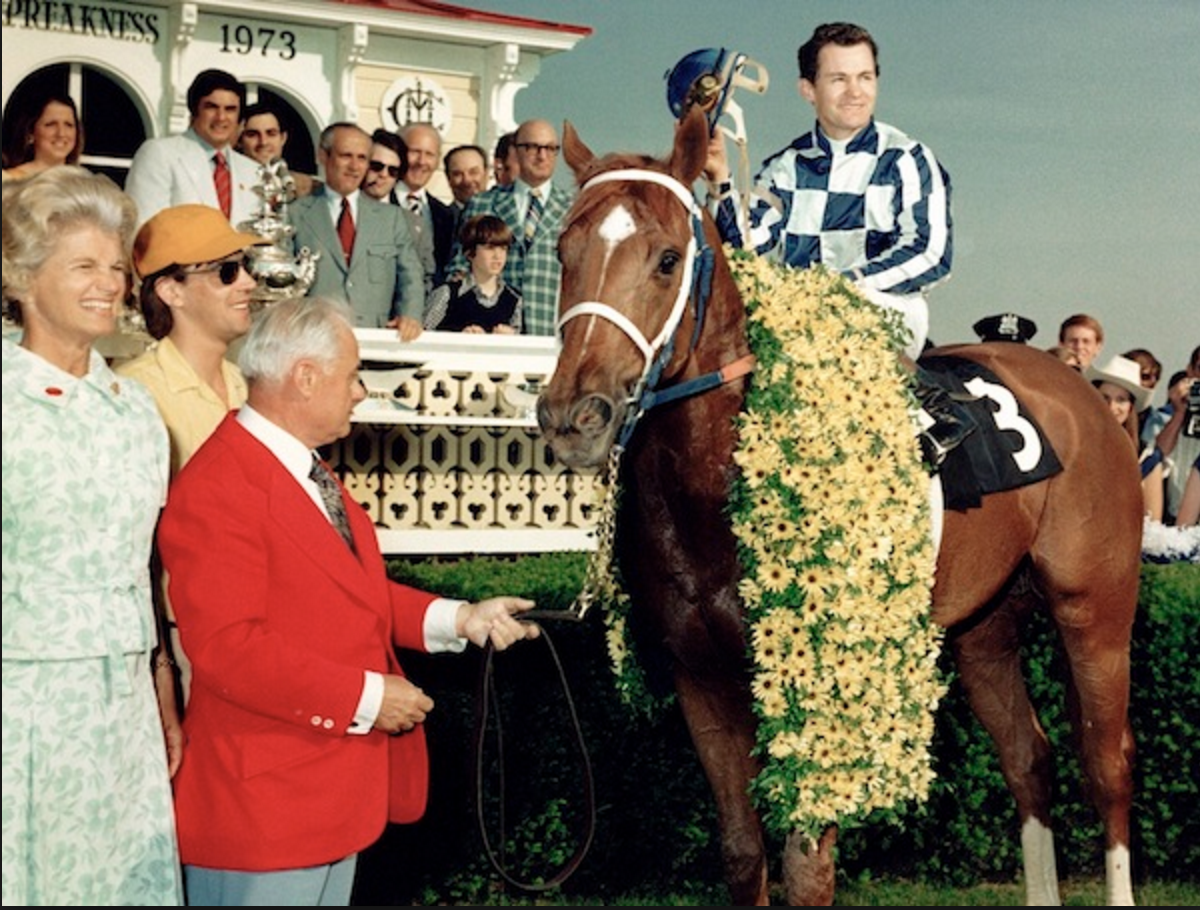 What in the heck happened to Arrogate after his spectacular victory in the Group I, $10 million Dubai World Cup last March 25?

When Arrogate rallied from far back to win the race in Dubai going away by 2 1/2 lengths after a terrible start, he looked like a true super horse. Not only did he win, but the rival that Arrogate flew past in the final furlong was none other than Gun Runner.

However, after that race, the remainder of the 2017 campaigns by Arrogate and Gun Runner were in stark contrast.

Following the Dubai World Cup, Gun Runner was unbeatable. He won all four of his remaining 2017 starts by a combined 24 3/4 lengths. In his final race of the year, he won the Grade I, $6 million Breeders’ Cup Classic by 2 1/4 lengths at Del Mar on Nov. 4 to sew up the 2017 Horse of the Year title.

After Arrogate’s Dubai World Cup triumph, he never won another race. It was as if after his journey to Dubai, he became a super horse who somehow lost his super powers. Following the Dubai World Cup, Arrogate lost all three of his remaining 2017 starts by a combined 22 lengths.

Arrogate’s career, unlike Gun Runner’s, ended not with a bang, but with a whimper in the BC Classic. After Arrogate exited the gate from post 1 and ducked inward in the opening strides, he was 11 lengths off the early pace. He never threatened, finishing in a dead heat for fifth, 6 1/4 lengths behind Gun Runner.

From time to time in recent years here at my Xpressbet.com column, I have presented my list of the Top 100 Racehorses of the 20th and 21st Centuries to have raced in North America. The inspiration for this was the Top 100 Racehorses of the 20th Century announced toward the end of 1999 by the BloodHorse. The BloodHorse’s list emanated from a distinguished panel consisting of racing secretary Howard Battle, racing secretary Lenny Hale, writer Jay Hovdey, writer William Nack, steward Pete Pedersen, writer Jennie Rees and racing secretary Tommy Trotter.

Now that Arrogate’s racing days are over and he embarks on a new career as a sire, it seems this is an appropriate time to try and figure out where he belongs on my updated list of the Top 100 Racehorses of the 20th and 21st Centuries.

Let me tell you, trying to determine where to put Arrogate is not easy.

–Grade I Travers Stakes at Saratoga on Aug. 27, 2016. Arrogate won by 13 1/2 lengths in what I have characterized as a Secretariat-like performance. With a final time of 1:59.36 in hundredths or 1:59 1/5 in fifths, Arrogate obliterated the track record of 2:00 set by General Assembly when he splashed his way to a 15-length victory in the 1979 Travers on a sloppy track. The 2016 Travers truly was an amazing performance by Arrogate in that he was making only fifth career start, it was his stakes debut and he had been shipped all the way to Saratoga from Southern California.

–Grade I Breeders’ Cup Classic at Santa Anita Park on Nov. 5, 2016. With a powerful late surge, Arrogate won by a half-length. Three-year-old Arrogate ran down a formidable 5-year-old foe in California Chrome (the 2014 and 2016 Horse of the Year), who finished second.

–Group I Dubai World Cup at Meydan on March 25, 2017. Arrogate was last early in the field of 14 after a tardy start that then was exacerbated when he was bumped a number of times in the opening strides like a pinata while being squeezed back. Nevertheless, in a performance for the ages, Arrogate rallied to win going away by 2 1/4 lengths. He blew right past Gun Runner in the stretch. As Arrogate approached the finish, Terry Spargo said during his call of the race: “ ‘A’ is for Arrogate. ‘A’ is for absolute superstar. ‘A’ is for anointing. And we’ve seen the anointing of the Man o’ War of the 21st century, Arrogate, a brilliant winner of the Dubai World Cup.

Bob Mieszerski, a respected longtime Southern California newspaper handicapper, said recently that despite Arrogate’s losses in his final three career starts, he is the best horse he has seen race since Spectacular Bid. I know there are a number of others who share this view.

Spectacular Bid is at No. 5 on my Top 100. But where, oh where, should Arrogate go on the list?

Arrogate departs the racing stage with lifetime earnings of $17,422,600. There have been ads for Arrogate going to stud in 2018 stating he is “the world’s richest racehorse.” That is incorrect. Arrogate is North America’s richest racehorse, but there are two other racehorses to have earned more. They are Japan’s Orfevre ($19,005,276) and Gentildonna ($18,468,392)

If Arrogate’s racing career had come to an end after the 2017 Dubai World Cup, I most likely would have put him somewhere in the Top 20. But I can’t help but feel that his three subsequent Del Mar defeats do mar his standing vis-a-vis the all-time greats.

–Grade II San Diego Handicap at Del Mar on July 22. “He laid an egg,” Arrogate’s Hall of Fame trainer, Bob Baffert, said after the Unbridled’s Song colt finished fourth and lost by 15 1/4 lengths as a 1-20 favorite in a race won by 7-1 Accelerate. In terms of the all-time upsets at Del Mar, this ranked right up there with the 1996 Pacific Classic in which 39-1 Dare and Go won and ended 1-10 favorite Cigar’s 16-race winning streak.

–Grade I Pacific Classic at Del Mar on Aug. 19. The good news was 3-5 favorite Arrogate ran a whole lot better than he did in the San Diego. The bad news was he lost again, this time by a half-length to the Baffert-trained 3-1 Collected.

–Grade I Breeders’ Cup Classic at Del Mar on Nov. 4. Enough people thought Arrogate was going to end his racing career with a victory that he was sent away as the 2-1 favorite. But a second BC Classic win by him was not to be. As mentioned earlier, he never threatened and finished in a dead heat for fifth.

The truth of the matter is we probably will never know exactly why Arrogate fizzled during the second half of 2017. There are various theories. Did he simply dislike Del Mar’s main track? Or did he slip from the top of the mountain because it took so much of an effort to win the Dubai World Cup in conjunction with the long round trip that it took a mental and/or physical toll on him? Or perhaps he was off his game during the second half of 2017 because of Dubai AND not caring for the track at Del Mar.

While Arrogate did manage to win on the dirt at Santa Anita, Del Mar, Saratoga, Gulfstream and Meydan, it does appear the main track at Del Mar was far from his favorite surface. His lone victory on Del Mar’s main track came in an allowance/optional claiming race in 2016 as a springboard to his record-breaking Travers victory. But keep in mind that in Arrogate’s 2016 win at Del Mar, he recorded a 99 Beyer Speed Figure, far from his best, suggesting he succeeded even though he did not relish running on that track. That figure of 99 at Del Mar was considerably lower than the Beyers for his 2016 victories at Saratoga (122 in the Travers) and at Santa Anita (119 in the BC Classic) and his 2017 wins at Gulfstream (119 in the Pegasus World Cup) and at Meydan (an unofficial 115 in the Dubai World Cup).

In any case, with regard to my list of Top 100 Racehorses of the 20th and 21st Centuries to have raced in North America, it really doesn’t matter why Arrogate sputtered during the second half of 2017. The fact of the matter is that’s what happened.

And so, after giving careful consideration as to where to put Arrogate on my list of the Top 100 Racehorses of the 20th and 21st Centuries to have raced in North America, I have concluded that No. 22 is an appropriate spot for him. This puts him a notch below Colin. I can’t put Arrogate any higher than Colin. The main reason for that is Colin was undefeated in 15 lifetime starts, while Arrogate lost four times in his 11-race career.

California Chrome and Gun Runner also are newcomers to my updated list of the Top 100 Racehorses of the 20th and 21st Centuries to have raced in North America. California Chrome went to stud early this year following his loss in the Pegasus World Cup. Gun Runner is scheduled to make his final career start in the 2018 Pegasus World Cup early next year before he commences stud duty.

I believe Arrogate should be ranked higher than California Chrome. That’s primarily because both times they ran against each other, Arrogate won.

I have decided to put California Chrome at No. 35 and Gun Runner at No. 93.

On Track with Johnny D: What Happened?

On Track with Johnny D: Waiting for Da-Dough