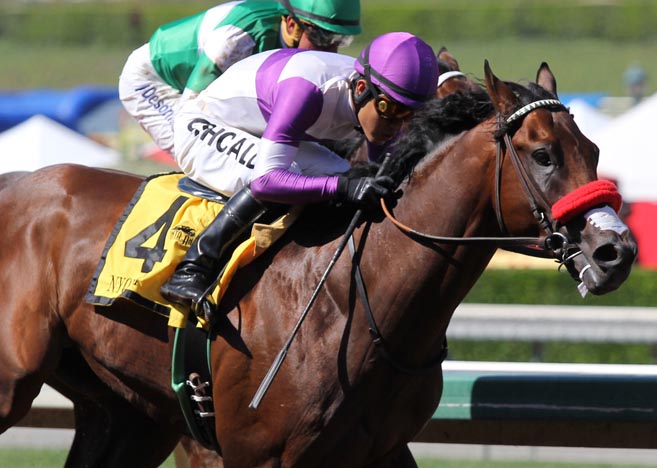 The way I currently see it, there is a good chance the winner of this year’s Kentucky Derby has a 91007 zip code.

On my Kentucky Derby Top 10 this week, No. 1 Nyquist, No. 2 Exaggerator and No. 3 Mor Spirit are all based in California at Santa Anita Park, zip code 91007.

No. 5 Cupid, who is entered in this Saturday’s Grade I Arkansas Derby at Oaklawn Park, also calls Santa Anita home.

And keep in mind the 91007 zip code also is where the undefeated and untested Songbird resides. Voted a 2015 Eclipse Award as champion 2-year-old filly, Songbird just might be the best 3-year-old in the country of either sex. There are many who believe that in the wake of another ridiculously easy victory by Songbird last Saturday in the Grade I Santa Anita Oaks.

As for the Kentucky Derby, here is my current Top 10:

The Blood-Horse’s Steve Haskin seemingly sees it quite similarly to yours truly in terms of the relative strength of California’s leading 3-year-olds.

“There’s no denying it. The California horses simply look better than the Eastern horses,” Haskin wrote. “Just look at Trojan Nation’s surprising second-place finish, beaten a head, in the Wood Memorial at 81-1, and even Laoban ran a big race in the Blue Grass Stakes, setting some wicked early fractions and still finished fourth at 20-1, beaten only 4 3/4 lengths. And both these horses are maidens.”

Trojan Nation is still another who trains at Santa Anita, whereas Loaban is based at Los Alamitos (zip code 90720).

Not only do four of the top five horses on my Kentucky Derby Top 10 reside at Santa Anita, who would have guessed that a seven-furlong race at the Great Race Place in mid-February, the Grade II San Vicente, would turn out to be such an important springboard to this year’s Kentucky Derby? It has been a long time since a seven-furlong graded stakes race in February has had such relevance in terms of the Run for the Roses.

Nyquist, who was voted a 2015 Eclipse Award as champion 2-year-old male, won the seven-furlong San Vicente in his 2016 debut by 1 1/2 lengths in a rapid 1:20.71. Exaggerator finished a respectable second.

After the Feb. 15 San Vicente, Nyquist won the Grade I Florida Derby at Gulfstream Park on April 2 to remain undefeated in seven starts. Exaggerator would go on to win last Saturday’s Grade I Santa Anita Derby.

The 1 1/8-mile Santa Anita Derby was contested on a sloppy track. A wet surface for the Santa Anita Derby is a real racing rarity. The last time it occurred was when Point Given won the 2001 renewal on a wet-fast track while on his way to the Horse of the Year title. Before that, you have to go all the way back to 1957, when a Washington-bred, Sir William, won the Santa Anita Derby on a track rated slow, with Round Table finishing third as the 6-5 favorite.

There certainly was nothing slow about Exaggerator on the far turn in this year’s Santa Anita Derby. He made an Arazi-like move while in the process of turning a 16-length deficit into a resounding 6 1/4-length triumph.

It is not an exaggeration to say only five horses have ever won the Santa Anita Derby by a larger margin than Exaggerator. And four of the five subsequently captured the Kentucky Derby — Majestic Prince, Affirmed, Winning Colors and Sunday Silence.

These are the largest margins of victory in the history of the Santa Anita Derby:

Exaggerator now heads to the Kentucky Derby with only one strike in my Derby Strikes System.

Brody’s Cause has zero strikes. He had finished a disappointing seventh in the Grade II Tampa Bay Derby on March 12, but then rebounded and won last Saturday’s Grade I Blue Grass at Keeneland by 1 3/4 lengths.

I developed my Derby Strikes System many years ago to try and determine a horse’s chances to win the Kentucky Derby from both a tactical perspective and a historical standpoint.

The system consists of nine key factors. When a horse does not qualify in one of the nine categories, the horse gets a strike. The nine key factors are explained at the end of this column.

Outwork, who won last Saturday’s Grade I Wood Memorial on a muddy track at Aqueduct in his fourth lifetime start, has one strike, like Exaggerator. American Pharoah, last year’s Kentucky Derby winner, also had only one strike. He went on to win the Preakness and Belmont to become the first horse to sweep the Triple Crown since Affirmed in 1978.

The lone Derby strike for both Outwork and American Pharoah is in the “sufficient racing experience” category. In recent years I have concluded that this is the least important category in the Derby Strikes System because horses do not race as much these days.

The lone strike for Exaggerator comes in the “gameness factor” category. To avoid getting a strike in this category, a horse’s finish position in both of his or her last two races before the Kentucky Derby must not be worse than his or her running position at the eighth pole. This points out horses who don’t like to get passed in the final furlong.

Mor Spirit, runner-up in the Santa Anita Derby, is another with only one strike. His strike comes in the “eighth pole” category. In order to avoid receiving a strike in this category, a horse must have been either first or second with a furlong to go in either of his or her last two starts before the Kentucky Derby.

These are the fastest half-mile times ever posted in the Santa Anita Derby:

Danzing Candy was No. 5 on my Kentucky Derby Top 10 last week. He is gone from the list this week.

Shagaf was No. 1 on my Kentucky Derby Top 10 last week. He also is gone from the list this week.

I wrote last week that it was important for Shagaf to avoid running the type of race in the Wood Memorial that would cause him to end up having more than a single strike. I also wrote that he definitely needed to step it up in the Beyer Speed Figure department in the Wood. However, he did neither.

Shagaf was 11 lengths behind early in the Wood. He was much farther back early than ever before. In his previous three races, he had not been more than 2 1/2 lengths behind early. Shagaf did make a good move in the Wood to get into contention on the far turn. He then got blocked momentarily on that turn. After that, Shagaf still managed to reach what I felt was an ideal spot at the top of stretch to win the Wood if he had been able to generate any kind of kick in the stretch.

The Wood was especially winnable for Shagaf from where he was at the top of the stretch considering how slow a race it was this year. How slow? As Daily Racing Form’s David Grening pointed out, Outwork’s final time of 1:52.92 for 1 1/8 miles made it the slowest of 65 Wood Memorials at this distance. Earlier on the card, 3-year-old filly Lewis Bay won the Grade II Gazelle in 1:52.60.

Not only did Shagaf lack the necessary punch to get the job done during the stretch run of a Wood that was so slow, he actually went backwards a bit in the final furlong.

Shagaf finished fifth in the Wood as the 9-5 favorite. He emerged from the race with not one, not two, not three, but four strikes. He also did not step it up in the Beyer Speed Figure department. Shagaf was assigned an 88 Beyer for his Wood performance, matching the 87 he received when he won the Grade III Gotham on the inner track March 5 at Aqueduct. His top Beyer Speed Figure remains the 88 he was assigned for his six-length maiden win on the main track at the Big A last Nov. 22.

Zulu wound up 12th as the 2-1 favorite in the Blue Grass. And he came out of the race with even more strikes than Shagaf. Zulu has a whopping five strikes (Categories 2, 4, 5, 6 and 7). But Zulu’s strikes do not really matter now, insofar as a start in the Kentucky Derby is not in the cards for him, whereas the plan is to enter Shagaf in the Run for the Roses. But with four strikes, it most likely will be a mission impossible for Shagaf on the first Saturday in May.

We will know the number of strikes for more Kentucky Derby candidates after this Saturday’s Arkansas Derby. I will have those strikes for you next week.

THE NINE KEY FACTORS (OR CATEGORIES) IN MY DERBY STRIKES SYSTEM:

4. THE GAMENESS FACTOR. (The horse’s finish position in both of his or her last two races before the Kentucky Derby was no worse than his or her running position at the eighth pole.) This points out horses who don’t like to get passed in the final furlong. (Exceptions: Since 1955, the exceptions have been Venetian Way in 1960, Cannonade in 1974, Foolish Pleasure in 1975, Ferdinand in 1986, Silver Charm in 1997, Mine That Bird in 2009 and Super Saver in 2010, with Canonero II in 1971 unknown.)

5. THE DISTANCE FOUNDATION FACTOR. (The horse has finished at least third in a 1 1/8-mile race or longer before the Kentucky Derby.) This points out horses who have the proper foundation and/or stamina for the Derby distance. (Exceptions: Since 1955, the only exceptions have been Kauai King in 1966, Sea Hero in 1993, Charismatic in 1999, Giacomo in 2005 and Mine That Bird in 2009.)