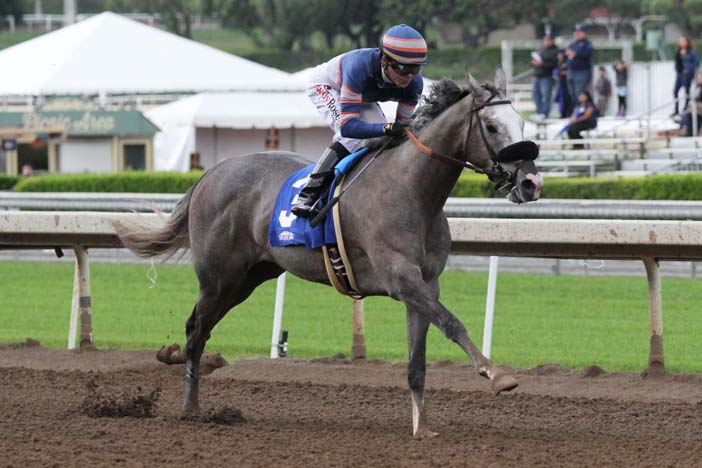 Racing is back at the Great Race Place and the first Saturday back of racing is a doozy with a great 10 race card and full fields to boot. For this weeks play I am going to head to the 3rd race, a 5 1/2 furlong Turf Sprint for Fillies and Mares, Three years old and upward. Twelve horses line up in this one and it is interesting to see trainer Bob BAffeet debut a $1,000,000 American Pharoah filly and a $650,000 Speightstown filly in this event.

On the breeding side of things they should be set up just fine for this event but, as we all know, Baffert’s well-meant three year olds, filly or colt, generally debut on dirt, so I am going to take a stand against both, as well as the morning-line favorite, Affianced for trainer Richard Mandella.

My selection in this race will be the 9, Moonhally Milly, 6-1 on the morning line. With both Baffert horses signed on, as well as a few others who ought to show speed, I believe this race will set up nicely for a closer, which has not been the case in racers of this type at Santa Anita. Moonhall Milly ran great in her North American debut and just missed when second to Shines Her Light on February 1st. Shines Her Light was making her North American debut on that day and got first run on Moonhall Milly to grab the win.

This time around though, I believe Moonhall Milly will be more forwardly placed and coincidentally the rider of Shines Her Light last time, Umberto Rispoli, now replaces Flavien Prat on Moonhall Milly, as Prat heads to Affianced. The 14 that Moonhall Milly ran last time out puts her right there with Affianced and with a couple months break since racing all of these horses are coming off layoffs, a situation in which trainer Leonard Powell thrives, scoring at 23%.

Adding to the appeal is the work that Moonhall Milly had on May 7th, which can be seen here, an easy 4 furlong work that seems to indicate Powell is confident she is ready to run.

Navetta for trainer John Sadler ran a 10 last time, better than Moonhall’s 14, but she broke slow and ran into a hot pace, I do believe she wants to be near the lead and may get caught up in another wicked pace duel this time around.

In terms of fellow contenders, obviously Affianced with her 14 last out is a logical choice, as well as Navetta with her 10. Sweet Sonny is a first-time starter for trainer Brian Koriner, a $250,000 purchase by Twirling Candy ridden by Jose Valdivia Jr. who may be an interesting choice underneath in exotics.