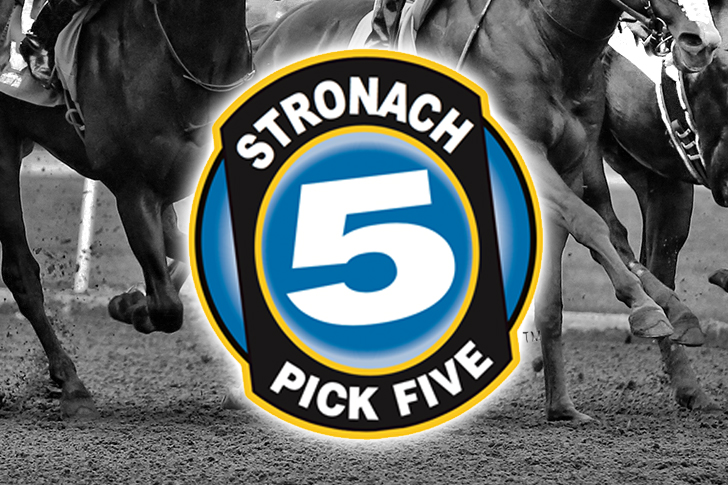 Use on back-up: 4 Unequivocal

Forecast:  Low-level maiden claiming 2-year-olds sprint five furlongs in a completely unclassified field.  To survive and advance, a “spread” allows for the possibility of landing a nice priced winner.  Bay of Rocks is a first-time Lasix user with a decent effort here two runs back.  Toss out his Timonium effort (he stumbled at the start and raced wide) and hope can repeat his speed/fade third place effort over this track and distance in early August.  Rapidashcat was a fair fourth over this track and distance in his debut, was virtually eased in his start over a sloppy track at Delaware, and today drops a bit in class while adding blinkers for the first time.  He gets a break in the weight with the switch to a competent bug boy and shows an easy half mile gate work at Pimlico since raced.  Two fresh faces – Aces and Faces and Spanish Skies – represent stranger danger and are “must uses.”  ‘Skies has a bullet half mile workout over this track in early August to indicate at least some ability and is one of two Smith-trained entrants while attracting the barn’s much preferred jockey, Carrasco.  Unequivocal has three races under his belt, is dropping to his lowest level ever and is worth at least some consideration on a back-up ticket.

Use on main ticket:  1-Movie Moment

Use on back-up ticket: 9-Tinabud

Forecast: A typical grass grab bag for entry-level allowance 3-year-old fillies offers several possibilities in a race that requires either a spread, or a stand.  We’ll take a stand and try Movie Moment as a single.  A prior winner over the Santa Anita turf course, she had a difficult run when a closing but too late sixth (beaten less than three lengths) in a similar affair at Del Mar two runs back, and then was a respectable though non-threatening seventh (beaten just over five lengths) in Del Mar Oaks-G1 while facing infinitely tougher competition.  Back where she belongs today, drawing the favorable rail, and switching to Stevens, the Sheriffs-trained daughter of Paynter has an excellent chance to spring a mild surprise with any kind of decent trip.  As a back-up, we’ll include Tinabud, a first-off-the-claim for Mullins and one of two in the race from this barn (the other is recent maiden winner K P Pergoliscious).  Tinabud closed willingly against the grain when third in a $50,000 seller at Del Mar and could create some noise with a forward move for a clever outfit.

Use on main ticket: 5-Scam

Forecast: There are four to consider in this competitive allowance/optional claiming sprint, with the recent Vitali claim Take Notice likely to get plenty of play based on his recent sharp win at Saratoga.  However, the evidence suggests he’s a need-the-lead type, as both of his wins came gate-to-wire. Meanwhile, he was unable to hit the board in his four other career starts in which he was unable to make the running.  With the presence of speedy Field Trip in the field, ‘Notice is no slam dunk to get his coveted trip, so while we’ll include him, we’ll definitely not trust him.  Scam is good enough to win and he’s turning back to his best trip (six furlongs).  He’s fast enough on numbers and loves this main track, so we’ll make the Walder-trained gelding the one to beat.  While his failure as the favorite in his last two starts gives cause for concern, the projected race flow should highly compliment his late-running style.   Empire Power is tackling older for the first time and is a bit up against it based on speed figures.  The positive is that he’s making his second start off a layoff and likely will produce a forward move, but he’ll need to.  Let’s use Scam as a main-ticket single but use two underneath to protect.

Forecast:  There are several legitimate contenders in this $40,000 claiming dash in another race that requires spread tactics.  Toomuchisnotenough may deserve a very slight edge on top in his second start off a layoff and over an all-weather surface that he’s proven he loves (first or second in 17 of 25 starts).  The Bonde-trained mare may have lost her best chance with a rough start in a tougher spot last month; she drops a level and is reunited with R. Gonzalez, who has won on her in the past.  On pure numbers she’s no faster than the others, but always has been thoroughly genuine and consistent.  Bako Sweets has an effective stalking style and is another with superior form over this surface (first or second in five of six starts).  She’ll be in the first flight throughout and have every chance.  Table for Three returns to the Tapeta after series of grass efforts; she’s won three of nine over the local synthetic track and always has been most effective when held up early and allowed to run late.  We’ll see if Couton rides her that way.  Snow Cloud is a first-off-the-claim play for Wong (27% with this angle) but is winless in three starts over this track and has no tactical speed.  A bullet workout out since joining his new barn catches the eye, so improvement is probable.  If you’d like to spread a bit deeper consider Deb’s Wildcard and Impecunious on a back-up ticket.  The former is yet another Tapeta specialist, though her recent form is a below her best stuff, while the latter appears the quickest in the field, though not particularly fast on figures.

Use on main ticket: 10-Soldiers Pride

Use as back-up: 7-Princess Zoe

Soldier’s Pride looks solid in this restricted (nw-2) $10,000 claimer for fillies and mares over a mile on turf.  Clearly best on numbers and with better-than-looked form, the daughter of Soldat drops to her lowest level ever and should get the patient ride she needs from Gaffalione.  With a repeat of her last race, or her maiden claiming victory at Aqueduct from last year, the Nicks-trained filly should be along in plenty of time.  Small ticket players should consider her as a possible single, because if it’s not her, it could be just anybody else.  Those who can afford to go a bit deeper should consider Princess Zoe as a backup; she was a winner over this course and distance when breaking her maiden two races back, and with just five career outings likely has some improvement in her that the others don’t.