Myself and the late War Emblem have a lot in common. “Mean.” “Savage.” “Tough to handle.” Rank.” All these adjectives have been used to describe us both in the past! And now, I’m going to take you back to the spring of 2002, to Cicero Illinois.
I’d been leading rider at Hawthorne a year earlier and continued to ply my trade as a journeyman rider, when early mornings and working horses went hand in glove like chicken wings and heartburn. I had my usual suspects on the daily work-tab: Christine Janks, Mike Stidham, Hugh Robertson, Bobby Springer. I even rode for the crotchety old curmudgeon, Jere R Smith Sr. (who I came to love).These people all supported me long after the allure of “5 pounds” had passed (add to that another 10 around my waist thanks to this Covid-19 lockdown).

It was a week before the Illinois Derby, and I was slated to work a filly for Frank “Bobby” Springer. Bobby and I had teamed up to win a lot of races over that year or so in the Reineman colors and I liked going to Bobby’s barn—yeah, he could (and still does) scream and cuss, but hey, so do I (what did I tell you—“mean” and savage”!). But Bobby and I generally had a good banter and his assistant and nephew, Ben Allen, kept me up to speed on ALL the goings on. In fact, Ben’s now an agent—a job that fits him well. I’ve always said, there are no greater gossips than washer-women and jock’s agents!
Anyway, the filly I was supposed to work turned out to be a colt—a great black Adonis of a colt by the name of War Emblem. I’d seen him before—he wasn’t hard to miss. He literally looked like the cover of the book, The Black Stallion (one of my prized possessions as a child, back when I was innocent and sweet!). But this wasn’t my first encounter with War Emblem. No.

Let’s turn the clock back again to October 4, 2001, and a nondescript maiden race on a gloomy cold afternoon at Arlington Park. I was riding a horse by the name of Hafta Conquer for Kenny McPeek in a one mile Maiden Special Weight for 2-years-olds. We were what you’d call relatively unfancied (story of my life!), and we eventually finished 6th. War Emblem in his 1st start blazed out a 1/2 in 45 4/5 (on dirt back then) and won by just under two lengths at 16-1. Now, Bobby Springer was not well known for his first time starters, so this was perhaps a shock to all—all except his immediate connections, who lined their pockets with gold! Okay, so, back to that morning in Cicero, Illinois, and agent Tom Morgan had the book of Alfredo Juarez who had been War Emblem’s regular rider. However, the week before entries for War Emblem’s next race, Tom had gotten a call from California-based trainer, David La Croix, to ride Fonz’s—a Grade 3 winner and more recently 5th in the G3 San Rafael to Came Home. Needless to say, Tom took the call, and so, Bobby needed not only a rider, but someone to work the horse too. In fact, it all got a little messy. Tom said something like, “we can work him, but I doubt we will ride him.” A good agent, don’t forget, always try to keep the doors open. Bobby, however, responded with something unprintable! Enter yours truly!

I remember getting the leg up on War Emblem—anyone who knows me can attest to the fact that this massive task has since only gotten tougher for the poor sod on the ground—before being told to go next to the pony. Just not too close! War Emblem was massive and I felt good all dressed in red (my usual attire, like Red Riding Hood) as we strutted out onto the track a few minutes after the break. Here were my orders: “Go 5/8 and not too quick—he’s fast don’t go too fast.” Bobby also threw a few expletives in for good measure (the usual for Bobby !).
Now, a broken clock’s right twice a day, right? I figured, seeing as this was my 2nd horse to work that day, I’d be alright. Split-second perfect. I broke away—or rather slouched away—from the pony at the 3/4 pole, making damn sure Blue, the starter, didn’t spring the gate behind me (what would have precipitated a sure-fire sling-shot effect). I remember smelling the familiar burning tang of Jere Smith’s cigar as I wafted past his spot at the 5 1/2 pole, at which point, with Bobby’s words ringing in my head—”not too fast you %*^@#! $!@%*”—I started to wonder why this big beast, nevertheless, wasn’t moving faster. My reins were like washing lines, for gods sake!

So, when we hit the 5/8 pole, I smooched a little and was glad when the engine responded with a little kick. Indeed, we picked it up furlong after furlong and it was what I’d call a “nice work.” Not jaw dropping—”nice,” like the sort of date you’d think about taking home to meet mum and dad.
War Emblem galloped out well. We pulled up. I gave him a pat. Ben met me as I walked off the track, and Bobby was already back at the barn waiting for me. By the time we arrived home, War Emblem was cool, calm and collected. Bobby, however, was not.
“Too slow!” he barked—then broke out into a beaming smile. “1:03. Not sure how you did that but …but good.” And that was that!
War Emblem won the race by a dizzying 6 1/4 Lengths under Larry Sterling Jr. (who, unbeknownst to me at that time, would become my husband two years later—hey, we all have our crosses to bear!). Repent was 2nd as the favorite under Jerry Bailey, and Fonz’s was 3rd under Alfredo Juarez. War Emblem, of course, would be sold and transferred to Bob Baffert, and the rest, as they say, is history…

My memories of War Emblem are simple. He was a lovely horse. He didn’t suffer fools gladly. But on the track, I found him to be one of the easiest and most relaxed horses I have ridden—could hold him with one finger. Oh yeah, he loved peppermints! I spoke to Bobby and his nephew, Ben, who echoed the same sentiments.
“I hate to give you a compliment, but if you could ride and were relaxed and confident he would do anything for you,” said Ben. “However, if you were not, he may run through a brick wall with ya!” 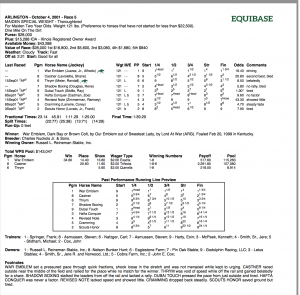 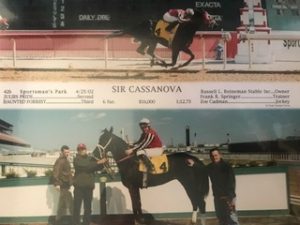 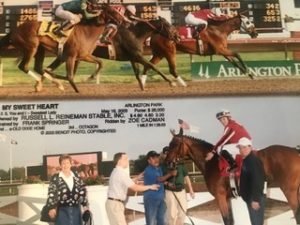 Above is the Chart for War Emblems Maiden win, and a few win pics in the Reineman Colours with Bobby and Ben!

A Few Musings from My Grade One Couch: Gulfstream Park Analysis for May 21st, 2020