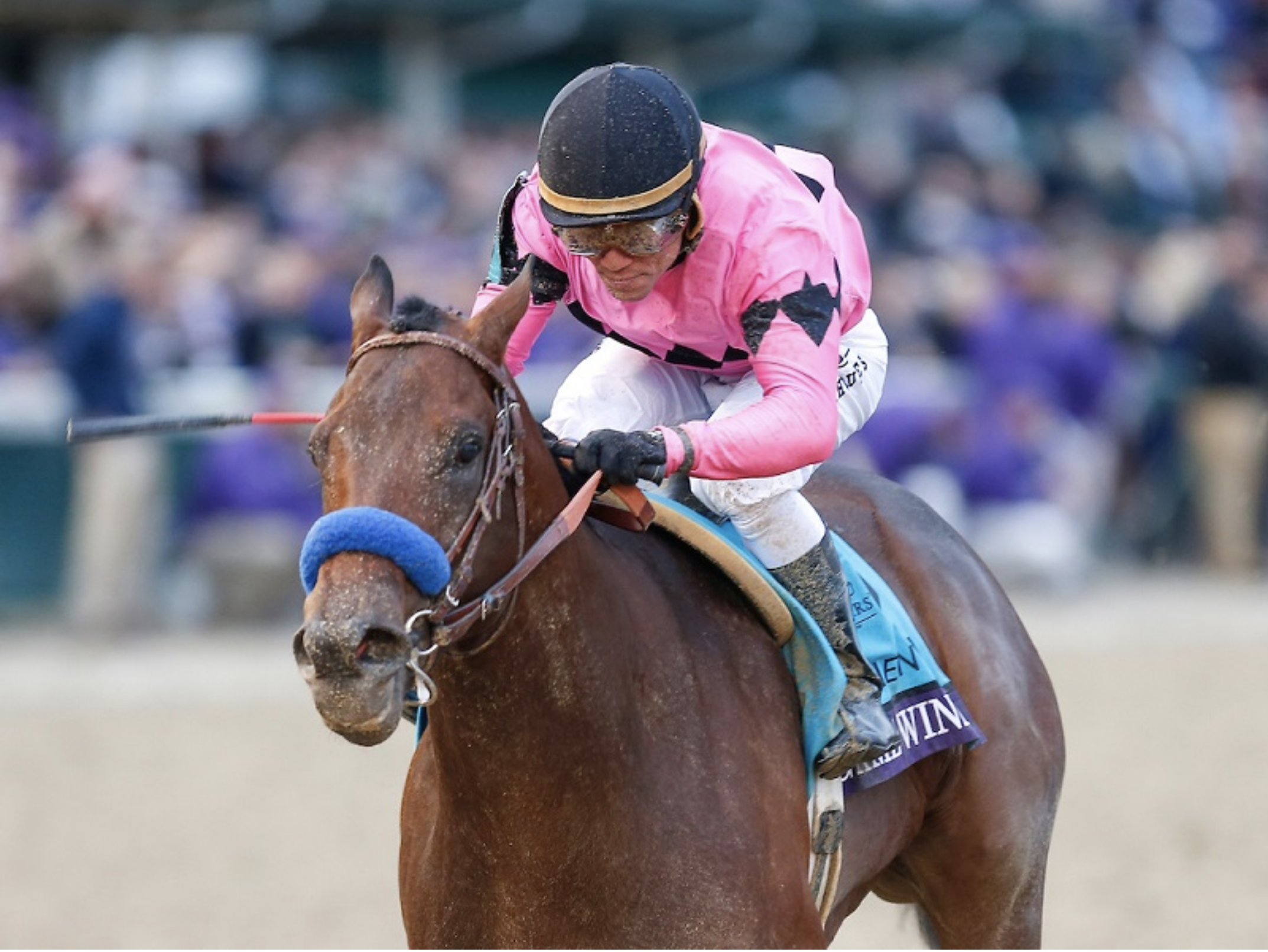 I posed that question back in January.

Daily Racing Form first conducted voting for champions in 1937. The Eclipse Awards were born in 1971.

Going back to 1937, Baffert is the only person who has trained four straight Eclipse Award-winning 3-year-old males. Baffert’s streak began with Triple Crown winner American Pharoah in 2015, then continued with Arrogate in 2016, West Coast in 2017 and Triple Crown winner Justify in 2018.

No other trainer since 1937 other than Baffert has had even two straight 3-year-old male champions.

When Baffert did not win the Kentucky Derby, Preakness Stakes or Belmont Stakes this year, it appeared that his run of 3-year-old male champions most likely was going to come to an end this year.

But it turns out that at this point in 2019, the door is still open for Baffert to make it five straight 3-year-old male champions. The main reason Baffert is still alive to keep his streak going this year is because each of the Triple Crown events was won by a different horse.

Country House won the Kentucky Derby in a 65-1 upset through the disqualification of Maximum Security. War of Will captured the Preakness at 6-1 in the wagering. Sir Winston took the Belmont at 10-1.

Maximum Security’s only defeat in his first five career starts was his DQ in the Kentucky Derby. But then Maximum Security stubbed his toe, so to speak, when he finished second as an overwhelming 1-20 favorite in the Pegasus Stakes at Monmouth Park on June 16.

Yes, the race for 3-year-old male title is wide open.

In 2016, Nyquist won the Kentucky Derby, Exaggerator won the Preakness and Creator won the Belmont.

When a different horse was victorious in each of the Triple Crown races in 2016 and 2017, Baffert capitalized by having a runner whose strong second half of the year produced an Eclipse Award as champion 3-year-old male.

During the second half of 2016, Arrogate won all three of his starts en route to the Eclipse Award as champion 3-year-old male. He won an allowance/optional claiming race at Del Mar in early August, then made a sensational stakes debut in the Grade I Travers Stakes at Saratoga on Aug. 27.

Actually, Arrogate broke a track record that had stood for 37 years. Arrogate’s final time in fifths of 1:59 1/5 shaved four-fifths of a second off the track record set by General Assembly (a son of Secretariat) when he splashed his way to a 15-length victory in the 1979 Travers on a sloppy track.

Arrogate was credited with a 122 Beyer Speed Figure for his Travers victory. It is the highest figure in the race since the first Beyers were assigned in the 1990 renewal.

During the second half of 2017, West Coast won three of his four starts. His victories came in the Grade III Los Alamitos Derby, Grade I Travers and Grade I Pennsylvania Derby.

In West Coast’s final 2017 start, he finished third behind older rivals Gun Runner and Collected in the Grade I BC Classic at Del Mar. Gun Runner was voted 2017 Eclipse Awards as champion older male and Horse of the Year.

At this point in 2019, Game Winner and Mucho Gusto appear to have the best chance to extend Baffert’s streak of 3-year-old male champions to five.

Game Winner was voted a 2018 Eclipse Award as champion 2-year-old male. However, he is winless in three 2019 starts. But he’s been firing bullet after bullet in the a.m. at Santa Anita. Game Winner has recorded bullet drills on June 13, June 20, June 28 and July 6 to suggest a big second half of 2019 just might be in store for the Kentucky-bred Candy Ride colt.

As of this writing, it looks like Game Winner will be running this Saturday in the Grade III Los Alamitos Derby at 1 1/8 miles. Mucho Gusto seemingly is headed to Monmouth’s Grade I Haskell Invitational at 1 1/8 miles on July 20.

Improbable was considered to be one of Baffert’s better 3-year-olds at the start of 2019 after winning the Grade I Los Alamitos Futurity last Dec. 8. However, Improbable has failed to win any of his four 2019 starts. He has had just one recorded workout (four furlongs in :49.40 at Santa Anita on June 19) since finishing sixth as the 5-2 favorite in the Preakness on May 18.

Kentucky Derby winner Country House will not race again this year, according to Hall of Fame trainer Bill Mott. That takes Country House out of the race to get the Eclipse Award as champion 3-year-old male of 2019.

Mark Casse recently reported that Belmont Stakes winner Sir Winston “is dealing with an injury to his left front ankle and will be out of training for a little while,” according to Daily Racing Form’s David Grening.

“I’m not going to rush him,” Casse said of the Kentucky-bred Awesome Again colt. “It will keep us out of the Travers for sure.”

Casse went on to say his plan is to have Sir Winston ready for the fall with the Pegasus World Cup at Gulfstream Park early in 2020 in mind (not to be confused with the recent Pegasus Stakes run at Monmouth). Thus, it seems that Sir Winston, like Country House, is out of the race to get the Eclipse Award as champion 3-year-old male of 2019.

Beyond Game Winner and Mucho Gusto, these currently appear to be the leading candidates to get the 2019 Eclipse Award as champion 3-year-old male:

–MAXIMUM SECURITY. If he rebounds from his stunning defeat in Monmouth’s Pegasus and wins the upcoming Haskell, he definitely will become the leader in the 3-year-old male division.

–CODE OF HONOR. He finished third and was elevated to second in the Kentucky Derby via the DQ of Maximum Security. Code of Honor then rallied from last to win Belmont’s Grade III Dwyer Stakes at one mile by 3 1/4 lengths last Saturday. Hall of Famer Shug McGaughey trains the Kentucky-bred Noble Mission colt, who is expected to make his next start in Saratoga’s Grade II Jim Dandy Stakes at 1 1/8 miles on July 27.

–OMAHA BEACH. After winning a division of the Grade II Rebel Stakes and Grade I Arkansas Derby, both at Oaklawn Park, Omaha Beach was installed as the 4-1 morning-line favorite in the Kentucky Derby. However, the Kentucky-bred War Front colt was scratched from the Run for the Roses due to an entrapped epiglottis that required surgery. He now is back in training with Hall of Fame trainer Richard Mandella at Santa Anita.

Mandella has mentioned Del Mar’s Shared Belief Stakes at one mile on Aug. 25 as a possible comeback race for Omaha Beach. That could serve as a springboard to the Grade I Pennsylvania Derby at 1 1/8 miles on Sept. 21.

Despite missing the three Triple Crown races, Omaha Beach currently is ranked No. 1 among 3-year-old males in the Watchmaker Watch, the weekly divisional ratings by Mike Watchmaker, national handicapper for Daily Racing Form.

–WAR OF WILL. If he had followed his Preakness triumph with a win in the Belmont, he currently would be in the driver’s seat to get the Eclipse Award in this division. But the Kentucky-bred War Front colt finished a disappointing ninth in the Belmont. War of Will worked four furlongs in :49.40 on Sunday at Churchill Downs for trainer Mark Casse. War of Will might run in the Jim Dandy.

–TACITUS. He was sent off as the 9-5 favorite in the Belmont and might well have won if not for a wide trip. According to Trakus, the Kentucky-bred Tapit colt traveled 65 feet farther than the victorious Sir Winston in the Belmont.

After winning the Grade II Tampa Bay Derby in March and Grade II Wood Memorial in April, Tacitus finished fourth and was moved up to third through the disqualification of Maximum Security in the Kentucky Derby.

Tacitus will likely make his next start in the Jim Dandy.

–GLOBAL CAMPAIGN. He won Belmont’s Grade III Peter Pan Stakes by 1 1/4 lengths on May 11, an effort that was flattered when runner-up Sir Winston subsequently won the Belmont.

Global Campaign was withdrawn from the June 22 Ohio Derby due to a reported foot issue. It’s encouraging that the Kentucky-bred Curlin colt worked four furlongs in a bullet :47.80 on the Oklahoma training track July 5 at Saratoga for trainer Stan Hough.

–MR. MONEY. Trainer Brett Calhoun is planning to run Mr. Money this Saturday in the Grade III Indiana Derby at 1 1/16 miles. If the Kentucky-bred Goldencents colt succeeds Saturday, it would be his third consecutive victory.

Making her first start since taking the Grade I BC Turf last Nov. 3 at Churchill Downs, Enable won the Group I Coral Eclipse Stakes by three-quarters of a length in England last Saturday for trainer John Gosden.

Once again in the Coral Eclipse, Magical had to settle for second behind Enable. Magical also ran second in the BC Turf.

Enable’s primary 2019 objective is to become the first three-time winner of the prestigious Prix de l’Arc de Triomphe in France on the first Sunday in October at Longchamp.