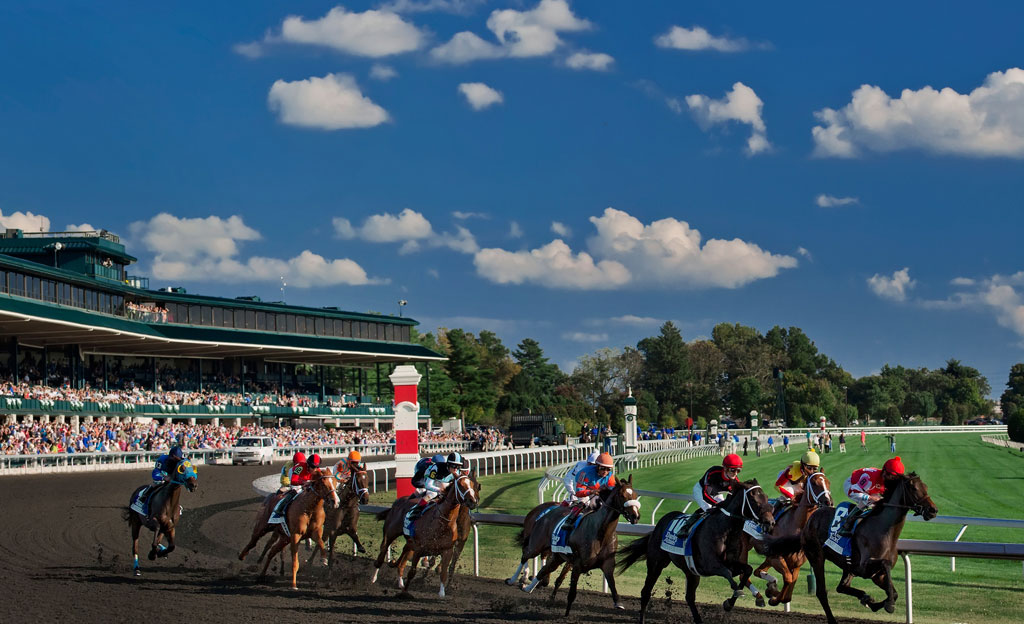 In the eyes of most people, Maximum Security has established himself as the pro-tem leader of the national 3-year-old male division in light of his victory in the $1 million Haskell Invitational last Saturday evening.

Maximum Security, sent away as a 4-5 favorite, took care of business in the Grade I event at Monmouth Park. Luis Saez once again rode the Kentucky-bred New Year’s Day colt for trainer Jason Servis.

Six started in the 1 1/8-mile Haskell after Joevia was withdrawn due to a problem with his right front foot. A close-up third early, Maximum Security had a slight lead over Southern California shipper Mucho Gusto with a furlong to go. Maximum Security then had the necessary response in the final furlong to prevail by 1 1/4 lengths.

The stewards conducted an inquiry into an incident on the far turn. At that stage of the race, King for a Day was on the inside, Maximum Security was between rivals, with Mucho Gusto on the outside when all three were battling for command. According to the Equibase race chart, King for a Day “was dropping back a bit” when he was “checked sharply when in tight nearing the quarter pole.” The stewards made no change to the original order of finish.

The way I saw it, King for a Day definitely found himself in claustrophobic quarters approaching the quarter pole. But the video replays that I saw failed to clearly establish any culpability on the part of Maximum Security and/or Mucho Gusto.

The Haskell was run much later than originally scheduled. Many tracks in that part of the country did not race Saturday owing to extreme heat. What was supposed to be a 14-race Saturday program at Monmouth began at 12:38 p.m. The second race started at 1:14. Monmouth then announced that racing would not resume until early evening. Only the six remaining stakes races would be run during the evening portion of the card.

Racing finally resumed when the Grade III Oceanport Stakes got underway at 6:03.

The off time for the Haskell was 8:12, which was 2 hours and 24 minutes past its original post time.

Speaking of time, 1:47.46 was what Maximum Security put on the board in terms of how long it took him to complete his Haskell journey. He recorded a fifth consecutive triple-digit Beyer Speed Figure.

At Gulfstream Park back on Feb. 20, Maximum Security posted his initial triple-digit Beyer. He was credited with a 102 when he won a seven-furlong allowance/optional claiming race by a little more than 18 lengths.

Here are the Beyer Speed Figures recorded by Haskell winners going back to 1991:

When he got the job done in the Haskell, Maximum Security became the first male of his age to win two Grade I events this year. Earlier this year, he took the Grade I Xpressbet Florida Derby at Gulfstream in late March.

And while he officially did not win the Kentucky Derby on May 4, Maximum Security did cross the finish line first in that Grade I event prior having his number taken down. He was disqualified and placed 17th for committing a foul when he veered out sharply nearing the five-sixteenths marker to cause interference to War of Will, Bodexpress and Long Range Toddy. It was the first time in the 145-year history of the Kentucky Derby that a winner was disqualified for an incident during the running of the race.

By virtue of Maximum Security’s victory in the Haskell, he gained sweet revenge for his recent defeat as a 1-20 favorite when he ran second to King for a Day in Monmouth’s Pegasus Stakes on June 16. Maximum Security had stumbled at the start of the Pegasus. This time he “broke sharply,” as noted in the Haskell race chart.

IS THE TRAVERS NEXT?

The next big event for 3-year-old males is Saratoga’s Grade I, $1.25 million Travers Stakes at 1 1/4 miles on Aug. 24. Many are hoping that is where Maximum Security will make his next start. Maybe he will, but I can’t help but have my doubts about that.

Servis said Maximum Security was “a pretty tired puppy” after the Haskell in a story written by BloodHorse’s Bob Ehalt.

“My feeling is I’m going to do everything like we’re running, and I’ll make a decision that week whether we can make it or not,” Servis was quoted as saying about the Travers in a Daily Racing Form story written by David Grening. “If I’m not happy with him, we won’t run, and if we’re happy, we’ll run.”

I will not be surprised if it turns out that Servis ultimately will want to give Maximum Security more time before his next race rather than run him in the Travers. If Maximum Security does skip the Travers, a logical next race would be Parx Racing’s Grade I, $1 million Pennsylvania Derby at 1 1/8 miles on Sept. 21.

Gary and Mary West own Maximum Security. The Wests already have a strong contender for the Travers in Game Winner, the Eclipse Award-winning 2-year-old male of 2018 who won the Grade III Los Alamitos Derby by five lengths at 1 1/8 miles on July 13 for Hall of Fame trainer Bob Baffert.

The Travers evidently is not in the cards for the Baffert-trained Mucho Gusto, who acquitted himself well as the runner-up in the Haskell when he received a career-best 100 Beyer Speed Figure. The Pennsylvania Derby is one of two options Baffert has listed as a potential next start for Mucho Gusto, according to various reports. The other option is the Grade I, $500,000 H. Allen Jerkens Stakes, a seven-furlong race at Saratoga on the Aug. 24 Travers card.

Keeping her perfect record intact, heavily favored Guarana won Saratoga’s Grade I Coaching Club American Oaks last Sunday. But after winning her initial two career starts by big margins, she did not dominate this time when racing around two turns for the first time.

Guarana splashed her way to a 14 3/4-length blowout on a sloppy track when unveiled in 6 1/2-furlong maiden special weight race at Keeneland on April 19. She then won Belmont Park’s Grade I Acorn Stakes by six lengths on June 8.

When jockey Jose Ortiz pushed the button entering the stretch in the longer CCA Oaks, Guarana shook clear to lead by two lengths with a furlong to go. But instead of widening in the final furlong, the 1-5 favorite had to withstand a late challenge from 7-2 Point of Honor. Guarana won by one length in 1:49.65. She was credited with a 92 Beyer Speed Figure, down from her 99 in the Acorn and 93 in her debut romp.

Guarana also had to withstand a claim of foul lodged by “the owner” of Point of Honor,” as stated by announcer Larry Collmus and as stated in the race chart. Guarana did drift out several paths nearing the sixteenth pole when it appeared that she was reacting to left-handed encouragement. But from the video replays that I saw, Guaranan never made any contact with or impeded Point of Honor, who is owned by Eclipse Thoroughbred Partners and Stetson Racing. (Grening reported it was Aron Wellman of Eclipse Thoroughbred Partners who lodged the claim of foul.)

“I just got lucky that I was clear because if I wasn’t as clear, I would have come down because she did overreact pretty good,” Grening quoted Ortiz as saying of Guarana.

Though Point of Honor did not win the CCA Oaks, she did earn her highest Beyer yet, a 91. This was her fifth career start. She has done something that one rarely sees. Point of Honor has improved her Beyer Speed Figure in each successive race since her debut.

Point of Honor recorded a 76 Beyer Speed Figure when she won at first asking last Dec. 16 at Gulfstream. Her subsequent Beyers have been 82, 87, 90 and 91.

George Weaver trains Point of Honor, a Kentucky-bred daughter of Curlin (Horse of the Year in 2007 and 2008). The Grade I Alabama at Saratoga on Aug. 17 is next for Point of Honor, according to Weaver.

I noticed that Point of Honor galloped out strongly after the finish of the 1 1/8-mile CCA Oaks. It appears to me she is going to relish the 1 1/4 miles of the Alabama.

Chad Brown conditions Guarana. Brown has indicated that while a start in the Alabama is not out of the question for Guarana, the Kentucky-bred daughter of 2004 Horse of the Year Ghostzapper most likely will make her next start in Parx Racing’s Grade I, $1 million Cotillion Stakes at 1 1/16 miles on Sept. 21.

Preakness Stakes winner War of Will and Belmont Stakes runner-up Tacitus head the field of six assembled for this Saratoga’s Grade II Jim Dandy Stakes at 1 1/8 miles this Saturday.

War of Will, trained by Mark Casse, reportedly has put on quite a bit of weight since he finished a disappointing ninth in the Grade I Belmont at 1 1/2 miles on June 8. The Kentucky-bred War Front colt has looked better than ever in his recent a.m. rehearsals. He won the Grade I Preakness by 1 1/4 lengths at 1 3/16 miles on May 18.

Tacitus also has been training in splendid fashion for the Jim Dandy. He worked four furlongs Monday in a sharp :48.71 on Saratoga’s Oklahoma training track for Hall of Fame trainer Bill Mott. In the Belmont, Tacitus’ wide trip was quantified by Trakus, which reported he traveled 65 feet farther than the winner, Sir Winston.

Global Campaign also merits respect in the Jim Dandy. The Kentucky-bred Curlin colt was credited with a 101 Beyer Speed Figure when he won the Grade III Peter Pan Stakes by 1 1/4 lengths in his most recent start on May 11 at Belmont Park.

Neither War of Will nor Tacitus has ever recorded a Beyer Speed Figure of 100 or higher.

Global Campaign was withdrawn from the Grade III Ohio Derby on June 22 due to a problem with his left front foot. Since missing that race at Thistledown, he has had three recorded workouts on Saratoga’s Oklahoma training track, including four furlongs in a bullet :47.82, best of 54 at the distance on July 5.

Omaha Beach had his first recorded workout Tuesday since being withdrawn from the Kentucky Derby due to an entrapped epiglottis that required surgery. The Kentucky-bred War Front colt worked three furlongs in a bullet :36.60, tied for best of 20 at the distance.

Daily Racing Form’s Jay Privman noted that Omaha Beach’s workout was the only one of 75 Tuesday morning at Del Mar “that was designated by the clockers as ‘breezing,’ a label given out rarely in California.” A “breezing” workout at a SoCal track generally means the horse did it under considerable restraint.

Omaha Beach “was amazingly good today,” said Mandella, who added that the colt “scoped nice after, too.”

Retired Hall of Fame jockey and Mandella assistant Alex Solis was aboard Omaha Beach for the drill.

At Oaklawn Park, Omaha Beach won a division of the Grade II Rebel Stakes on March 16 and Grade I Arkansas Derby on April 13. Following those victories, he was installed as the 4-1 morning-line favorite for the Kentucky Derby. But he had to miss the Run for the Roses because of his throat issue.

According to Privman, Mandella would like Omaha Beach to make Del Mar’s Shared Belief Stakes at one mile on Aug. 25, but the trainer said he’s “not going to force things to make that race.”

If Omaha Beach does manage to run in the Shared Belief, it’s conceivable that race could serve as a springboard to the Pennsylvania Derby on Sept. 21.

Uncle Benny has not raced since he finished second in the Grade I Breeders’ Cup Juvenile Turf at Churchill Downs last Nov. 2. The Kentucky-bred Declaration of War colt worked three furlongs in :39.80 on Jan. 19 at Palm Meadows in Florida, but he then became a “milk carton horse.”

On Track With Johnny D: Batman at the Spa