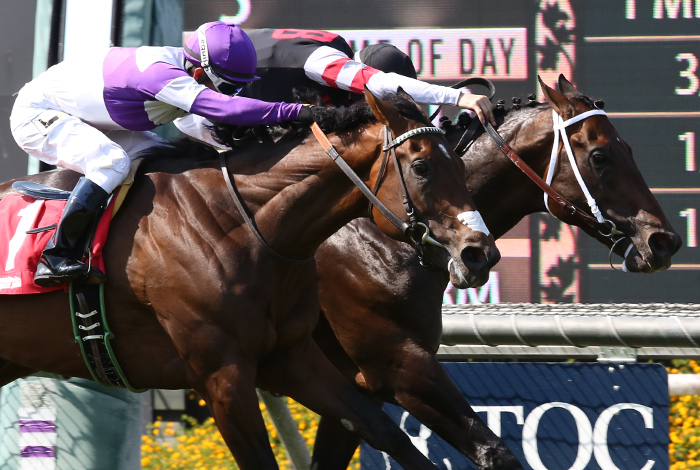 The Friday opener, a starter allowance/entry level allowance turf miler for 3-year-old fillies, drew only five starters, so there’s not much we can do with it.  #2 Joan of Arch seems a solid fit at this level; the daughter of Colonel John has run well over this course in the past, stretches out after a solid sprint tightener, and gets a break in the weights with the switch to bug boy Lindsay.  She should draft into a good pace-stalking position.  #5 Compel is the likely choice and one to beat.  A winner from a tougher field over this course and distance in April, the Richard Baltas-trained French-bred switches to top jockey Flavien Prat and looks capable of producing the last run.  Both should be included in rolling exotic play with preference on top going to Compel.

A field of six high-priced maiden claiming 3-year-olds occupy the second race.  #5 Gavin Streetsense drops into a seller for the first time, is reunited with jockey Rafael Bejarano, and can win with a repeat of his runner-up effort vs. straight maiden foes two races back.  First-time starter #2 Clifton Beach has trained well enough for John Sadler to be a major player at this level; the son of Langfuhr looked good in a recent gate work to indicate fitness and will be accompanied by the barn’s go-to rider, Tyler Baze.  Gavin Streetsense offers some value at or near his 4-1 morning line so we’ll put him slightly on top.

#1 Caradini is the 9/5 morning line favorite in the third race, a maiden special weight middle distance main track affair for fillies and mares.  She’s a 10-race maiden with good tactical speed but not much stretch punch, so include her in rolling exotic play if you must, but we’ll try to beat her using #3 Hayley’s Comment and #5 Emmzy.  The former wasn’t knocked about in her sprint debut last month and should benefit greatly from the outing; the daughter of Include makes a major switch to Prat and shows a bullet six furlong workout just nine days ago.  Emmzy also is stretching out and has flashed the kind of early zip in her sprint races that should put her on the lead today.  If she clears without pressure she could take this field a very long way, and with Mike Smith jumping aboard for Bob Baffert, this daughter of Eskendereya looks like a very live item.

The fourth race is a wide-open bottom-rung router for older horses and requires something of a spread in rolling exotic play.  #7 Mr. Cartagena has his issues but on pure figures is simply faster than these and will be tough to beat if he runs back to his nice score two races back.  The Pulpit gelding has a good stalking style and should fold into a comfortable spot from his outside draw.  #4 Lucky Shoes to Win was in a bit steep when a distant fourth for $12,500 last time out but earned speed figures in his two previous starts – both wins – that make him the one to fear most.  The North Light gelding likes to press the issue but can win from farther back if the situation dictates, so jockey Santiago Gonzalez can play it by ear.  #6 Being There usually lands in the frame, comes off a solid runner-up try at the level, and should be a late threat, especially if the pace turns out a bit faster than par.  We’ll try to survive using just these three in our rolling exotics – Mr. Cartagena gets the slight edge on top – but if you can afford to go a bit deeper go right ahead.

The fifth race is an excellent juvenile maiden sprint with several promising first-time starters.  #5 The All Button breezed a furlong in 10 seconds flat at the OBS March sale and then brought $250,000 at auction.  The son of Into Mischief obviously has plenty of zip and looks cranked up and ready for a big effort for trainer Doug O’Neill. #8 Aqua Frio went 21 1/5 seconds at that same Florida sale and then was purchased for $180,000.  He vans down from Northern California where trainer Blaine Wright put the finishing touches on this promising son of Uncle Mo.  #3 Right Hand Man, a Street Boss colt with a series of solid workouts for trainer Jeff Bonde (strong stats with first-timers), seems fit and ready and is worth including as well in rolling exotic play.

Use: 4-Enduring Erin; 5-Intoxicating Move; 7-So Good to Go

Older fillies and mares entered for a $25,000 tag meet over nine furlongs on turf, a typical grass grab bag that appears borderline inscrutable.  #4 Enduring Erin, freshened since mid-February, returns to turf, drops below her claim level, and makes a major jockey switch to Prat.  She’s run well fresh in the past, this barn has solid stats with layoff runners, and both of this veteran mare’s prior races over the Santa Anita lawn were good.  At 7/2 on the morning line she gets a very slight edge on top.  #5 Intoxicating Move, a beaten favorite over the Golden Gate Fields turf course in late April, drops a level for trainer Vann Belvoir, lands Bejarano, and should appreciate this stretch out to nine furlongs.  The daughter of Milwaukee Brew looks like the most dangerous of the deep closers.  #7 So Good to Go has a nice win up north two runs back that charts well here and should be forwardly placed and have every chance.

The featured seventh race brings back the recent highly-impressive allowance winner #4 Dream Team, who will try to duplicate his Los Alamitos form on the big track today for Baffert and Bejarano.  Very fast on numbers and lightly-raced with further improvement possible, the son of Tapit has won on the lead but probably will find himself in a stalking spot in a field with plenty of early zip.  A $1 million yearling purchase, Dream Team still has a chance to develop into a good sort, but at 9/5 on the morning line and likely to go lower, he won’t offer much value in the straight pool, so let’s just use him as a rolling exotic single.

The finale is a bottom-rung maiden claiming sprint for fillies and mares with three logical contenders.  #2 Patience Lady was nosed out in a similar spot at Los Alamitos in her last appearance, has trained well since, and won’t really need to improve much to finally earn her diploma.  #3 Redeeming Quality, freshened since the first week of April and a decent runner-up vs. similar foes in her most recent outing, looked especially sharp in a recent bullet five furlong drill over the training track and seems likely to produce a forward move.  Second in two of three career starts, the Steve Miyadi-trained daughter Calbred may be the most reliable among the known element.  First-time starter #8 Shanghai Beauty has done enough in the a.m. to warrant strong consideration at this level and certainly won’t have to be a world beater to score at first asking.  The daughter of Munnings will have every chance from her comfortable outside draw.