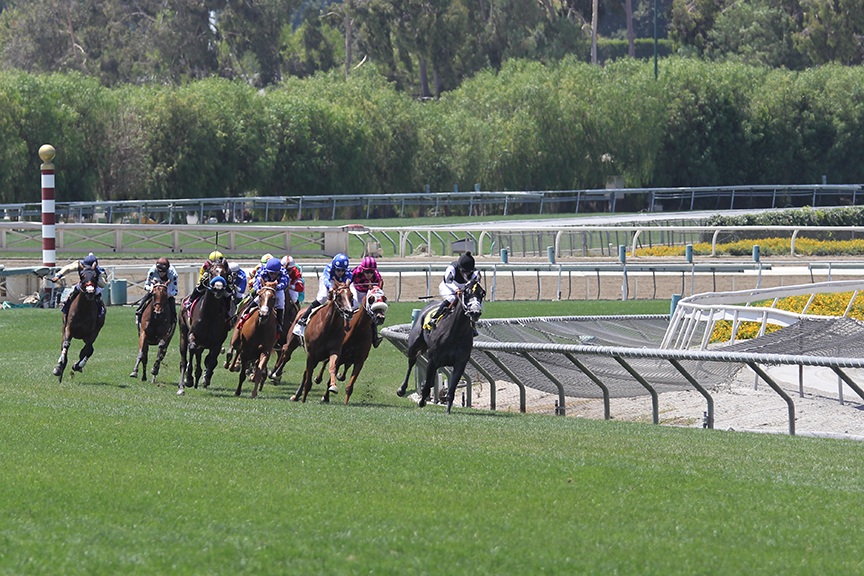 The selections contained within are geared to rolling exotic players.  The basic strategy is to isolate those horses that should be included in rolling daily doubles, pick-3s, pick-4s, pick-5s, and pick-6.

It is recommended that Jeff’s selections be used to augment the reader’s own personal handicapping, though excellent results can be achieved by applying the exact rolling exotic strategy specified by Jeff’s analysis.  Jeff’s recommended plays are intended for players with a moderate budget; however, the reader is encouraged to adjust Jeff’s wagering strategy to fit their preferred investment level.

X=likely winner but odds will be too short to play.

The opener is fairly wide open maiden juvenile turf miler without a whole lot of quality. We’ll use three in our rolling exotics and hope that’s sufficient.  Colonel Samsen produced a forward move in his second career start when a useful runner-up in a Kentucky Downs maiden special weight affair and if he can step forward again he could easily earn his diploma. A first time gelding, the son of Colonel John lands the good rail, retains Florent Geroux, and should have every chance. Curly’s Waterfront, in the frame in both career outings and with improving speed figures, is drawn farther out than we’d prefer but if he can negotiate a decent trip he should be in the thick of it again. Lord Admiral received no play (36-1) in his debut but outran his odds, battling bravely through the lane to wind up second in a modest affair for the level at Del Mar. He’s bred much more to be a dirt sprinter than a turf router and he hails from a low profile outfit, but if he produces a forward move he should at least get a piece of it.

Hot Sean was the “other” Baffert when debuting in a hot maiden sprint at Del Mar in late August and almost upset his more highly-regarded stablemate Cairo Healer before settling for second while nearly four lengths clear of the rest. Three nice workouts since that highly-rated race should have him on edge for a forward move, and Martin Pedroza, who rarely rides for this stable, retains the mount. Eleutheros has shown plenty of ability in the morning for Jerry Hollendorfer and looks the most dangerous of the newcomers. He’ll have to be pretty decent to beat the logical top pick but is worth some consideration as a back-up.

Bottom-rung maiden claiming fillies and mares occupy the “C” rated third race (least preferred, or pass). Redeeming Quality returns off a layoff, has trained nicely for her comeback and may be a better type now than she was in the spring. On pure numbers she really won’t have to improve much to win. Dixie Dame is a 14-race maiden with six defeats as the favorite, so she’s hardly one to trust. Maybe she’s finally found a field she can beat, maybe not. When she was third vs. similar at Del Mar in a seven furlong affair in her most recent outing, If You Believe earned a competitive figure with these. If she can turn in alike, she can win, and this shortened trip should be to her liking. In a race that is best avoided, we’ll give top billing to Redeeming Quality, but not with any degree of confidence.

The play here is against the inside speed types, with both Big Champion and Golden Atlantic likely to compromise each other on the front end. The three that we’re using are stalkers/closers that should benefit from the projected race-shape. Basinca has finished second three times from four career starts over the Santa Anita main track and should have every chance to produce the last run. Rafael Bejarano stays aboard for Doug O’Neill. Special Story produced a forward move when after breaking his maiden at first asking finished a close fourth in a similar starter’s allowance sprint at Del Mar last month. He should be running on strongly again and with some help front and could tag the speed. Magic Taste is one-for-16 lifetime, but his recent form is excellent and his numbers continue to rise. He’s another with the proper style for a race that figures to benefit those making a late run.

Cedar Rapids ran better than the line will show in his debut and seems certain to produce a significant forward move in this split of the first race. The Elusive Quality colt settled off the pace while saving ground, commenced what may have been a winning rally into the lane but ran into a roadblock, lost his momentum, and had to settle for fourth. He sports a steady, healthy work pattern since that mid-August affair for Richard Mandella, retains Flavien Prat, and should draft into an ideal second flight, ground-saving trip form his rail post position. Kimbear also flashed ability in his debut when pressing the pace before weakening late; the son of Temple City has worked well since that Del Mar outing and has every right to step forward. We’ll give Cedar Rapids the edge on top but use both in our rolling exotics.

The first Grade One race of the day, the FrontRunner Stakes for juveniles, looks pretty much like a two horse race. Del Mar Futurity winner Klimt, after being given a run in his debut when winding up fourth, has reeled off three straight impressive victories, each with a rising speed figure. The son of Quality Road continues to impress in the morning for Baffert while giving every indication that he’ll continue to improve as the distances increase. He’s 6/5 on the morning line and won’t offer any value at that price, but on paper he sure looks it. Straight Fire made the running in the Futurity but was overrun in the final furlong and wound up a distant second without offering much resistance. He switches to Prat, most likely will make the lead in his first try around two-turns, and will take them as far as he can.

There’s really no reason to pick against California Chrome in the Awesome Again Stakes, though at 2/5 on the morning line there’s not much we can do with him. He’ll probably face considerably more pressure today than he did in the Pacific Classic when he was allowed to stroll on the lead from the start; we’re expecting Dortmund (wearing blinkers for the first time and drawn favorably just to the outside) to challenge ‘Chrome and make the favorite run every step of the way. We could see the race developing similar to the San Diego Handicap (when ‘Chome’s margin of victory was only half-length), but in the end, Art Sherman’s horse should extend his winning streak to six.

A deep and highly-contentious full field of older fillies and mare competes over 10 furlongs in the Grade One Rode Drive Stakes. Racing luck certainly will play a part in the outcome. Avenge may be a tad questionable at this trip but the daughter of War Front has excellent tactical speed and may very well enjoy a similar journey to the dream trip that carried her to victory in the Mabee Stakes at Del Mar last month. At 6-1 on the morning she’s a “must use” in the rolling exotic play and perhaps is worth a bit in the straight pool as well. Zipessa is the likely pace-setter after a strong performance on the front end in the Beverly D. Stakes in Chicago in her most recent outing. The two that finished ahead of her in that race – Sea Calisi and Al’s Gal – are probably at least as good as and perhaps better than anything in the field. Decked Out owns a powerful late kick and just missed in a photo when flying home in the Del Mar Oaks in her most recent outing. A stakes winner over this course earlier this year, the daughter of Street Boss has looked super in the morning since that race for the Desormeaux brothers and should be heard from late, assuming she can negotiate a decent trip in a crowded field.

​Beholder has run 14 races over the Santa Anita main track. She has 13 wins and one second. Her recent workouts indicate she retains all of her speed and desire and we’re expecting the multi-champion to return to winning form after going down in a photo (while racing along the deeper inside) to Stellar Wind in the Clement L. Hirsch Stakes at Del Mar and then settling for second behind California Chrome in the Pacific Classic. This is another race where there’s no money to made (Beholder is 3/5 on the morning line) but you can certainly watch and enjoy.

Although both of her wins at Del Mar (in an impressive debut maiden affair and in the Juvenile Fillies Turf) were accomplished on grass, With Honors has trained just as well on dirt and there’s no reason she can’t extend her unbeaten streak to three despite the switch in surface. The daughter of War Front has excellent speed and probably will have to use it from the rail, but in a race that projects to offer comfortable early splits, we’re expecting her to establish control early and keep on going. There’s plenty of wagering value here at 9/2 on the morning line if you can get it. Zapperkat won her debut at Del Mar from the rail sprinting, and that’s a difficult thing to do. The daughter of Ghostzapper settled off the hot pace, rallied between horses when asked and drew clear with plenty left while earning a legitimate figure. Based strictly on pedigree the extra distance actually should work in her favor. These are the two that we’ll use in our rolling exotic play while giving preference to the prior stakes winner, With Honors, on top.

The finale, the Unzip Me Stakes for 3-year-old fillies sprinting down the hill, offers plenty of wagering value in a strong, deep event. Belvoir Bay, a stakes winner over this course last winter, returned to winning form with a gate-to-wire tally in the eight-furlong Torrey Pines Stakes over the main track Del Mar in late August, but she can be just as dangerous sprinting. Now that she’s back in top form, the Peter Miller-trained import looks capable of scoring right back, and at 6-1 on the morning we’ll use her in the straight pool and in rolling exotic play. Gomo is a Grade One winner on dirt (the Alcibiades Stakes at Keeneland last year) but may be just as good if not better on grass. Freshened and working smartly at San Luis Rey Downs, the O’Neill-trained filly will be rolling late and at 10-1 on the morning line is a “must use.” Swift Lady has won twice over this course and distance, including the Sweet Life Stakes, earlier this year, and could be the quickest of the quick coming down the hill. She’s back with her own age group today, continues to sizzle in the morning for Baffert and is most certainly better than her last trouble-filled effort at Del Mar would indicate.