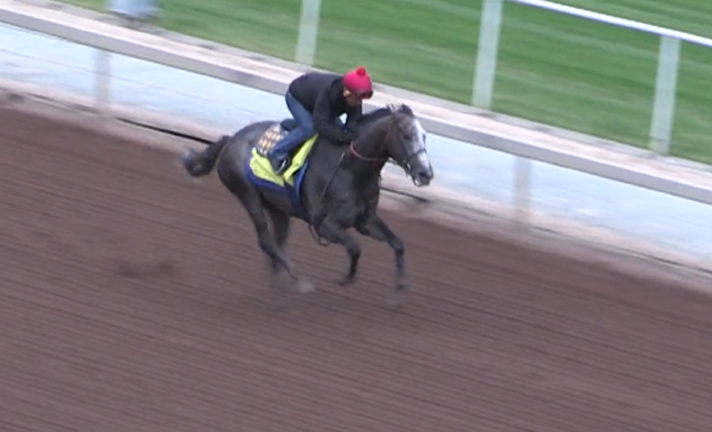 Pegasus, according to Greek mythology, is a winged horse. But more and more it seems even Pegasus himself might be no match for Arrogate.

Sweeping to the front on the far turn, Arrogate went on to win last Saturday’s inaugural running of the 1 1/8-mile Pegasus World Cup Invitational by 4 3/4 emphatic lengths at Gulfstream Park.

Enough can’t be said about the fantastic job Hall of Famer Bob Baffert did to have Arrogate ready to run such a marvelous race in the Pegasus World Cup under the circumstances. Baffert had to deal with what has been an extremely wet winter in Southern California while training Arrogate up to his first start since last Nov. 5.

One can only speculate what Pegasus’ Beyer Speed Figures might have been. But what the supremely talented Arrogate has done in this regard is impressive to say the least.

Arrogate was assigned a 122 Beyer Speed Figure when, in a smashing stakes debut last Aug. 27, he won the $1.25 million Travers by 13 1/2 lengths and broke Saratoga’s 1 1/4-mile track record by four-fifths of a second. Arrogate’s Travers performance was so brilliant that I have described it as Secretariat-like. After the Travers, Arrogate recorded a 120 Beyer Speed Figure in his $6 million Breeders’ Cup Classic victory last Nov. 5 at Santa Anita Park. He then originally was assigned a 116 Beyer in his $12 million Pegasus World Cup triumph, but his figure for this race subsequently has been increased.

The BloodHorse’s Steve Haskin is among those who are questioning the accuracy of Arrogate’s official Pegasus World Cup final time of 1:47.61 in hundredths, or 1:47 3/5 in fifths, in the belief it actually was faster.

No major track has had as much in the way of timing issues through the years as Gulfstream. Would I be surprised if Arrogate’s official time of 1:47.61 is wrong? No.

Daily Racing Form’s Matt Hegarty reported that Andrew Beyer, the founder of Beyer Speed Figures, said Tuesday that the initial figure given to Arrogate “was changed from a 116 to a 119 after figure-makers, including Randy Moss, hand-timed the race at a time that was significantly faster than the official time of 1:47.61.”

The controversy concerning Arrogate’s official final time in the Pegasus brings to mind what happened in the 1973 Preakness Stakes won by Secretariat. The original final time for that Preakness was posted as 1:55. But there had been an electric timer malfunction. Two Daily Racing Form clockers had timed Secretariat in 1:53 2/5, which would have lowered the track record by three-fifths of a second a la his final time in the Kentucky Derby. E.T. McClean, the racing official responsible for clocking Pimlico’s races, had timed Secretariat in 1:54 2/5. The Maryland Racing Commission ruled that McClean’s 1:54 2/5 would be the official final time for the 1973 Preakness.

In 2012, the Maryland Racing Commission reopened the case. The commissioners heard an appeal regarding the official final time of 1:54 2/5 for the 1973 Preakness. For more than two hours, the commissioners heard testimony, backed by modern technology, to prove Secretariat’s Preakness time actually had been 1:53. The new evidence was so compelling that the commissioners deliberated for only about 10 minutes before announcing the vote had been 7-0 to change Secretariat’s official Preakness time to 1:53, a stakes record, but no longer a track record.

In any case, to put Arrogate’s most recent three Beyer Speed Figures of 122, 120 and 119 into perspective, consider how they stack up against Curlin, who was voted Horse of the Year in 2007 and 2008. Curlin’s career-best Beyer Speed Figure was 119. His next best-figure was 114.

And what is really scary when it comes to Arrogate is that with only seven races under his belt, the possibility exists that we have only scratched the surface concerning his prowess.

The Grade I Pegasus World Cup was billed as a two-horse race between Arrogate and California Chrome, a sentiment that certainly was reflected by the wagering. Arrogate was sent away as the favorite at slightly less than even money (9-10), with California Chrome the 6-5 second choice. The odds for the other 10 starters ranged from Keen Ice at 16-1 to War Envoy at 188-1.

When Arrogate won the 1 1/4-mile BC Classic, he defeated runner-up California Chrome by just a half-length. The brand new Pegasus provided the stage for a highly anticipated rematch.

Many, including yours truly, felt California Chrome was dealt a terrible hand when he drew post 12. Since Gulfstream’s one-mile main track oval was expanded to 1 1/8 miles in circumference in 2006, Big Brown in the 2008 Florida Derby had been the only winner of a 1 1/8-mile race from post 12 in 18 starts going into the Pegasus World Cup.

California Chrome, with regular rider Victor Espinoza in the saddle for trainer Art Sherman, did race four to five wide into the first turn. But after that, California Chrome managed to get into a good position.

Noble Bird set the pace early in the run down the backstretch while racing just a bit ahead of Neolithic. California Chrome was a close-up fourth, just to the outside of Arrogate, who had been hustled away from post 1 by Hall of Fame jockey Mike Smith. At this stage of the race, Espinoza and California Chrome had Arrogate boxed in, a development that did have both Smith and Baffert concerned, according to their comments after the race.

Heading toward the far turn, California Chrome began to drop back despite being pushed by Espinoza in what turned out to be a futile attempt to keep up with Arrogate. With California Chrome dropping back, it suddenly afforded Smith the opportunity to get into the clear. Smith moved Arrogate away from the inside rail to get to the outside of both Noble Bird and Neolithic.

On the far turn, Arrogate was full of run and quickly moved past Noble Bird and Neolthic to take command. Meanwhile, as California Chrome continued to drop further and further behind, it became apparent something might be amiss. With a furlong to go, Arrogate had increased his lead to four lengths. He then maintained a commanding advantage the rest of the way, officially completing his 1 1/8-mile trip in 1:47.61 after being geared down the last part of the race. Shaman Ghost finished second. Neolithic ended up third, 3 1/2 lengths behind Shaman Ghost.

After California Chrome had dropped far out of contention in the stretch, he was not preserved with and finished ninth, 29 1/2 lengths behind Arrogate. It is reasonable to conclude that this was so substandard from a typical California Chrome performance that the fact that he had to break from post 12 really did not matter, as it turned out.

California Chrome emerged from the final race of his career with swelling in his right knee. The 2014 and 2016 Horse of the Year, a fan favorite, now will begin stud duty at Taylor Made Farm in Kentucky. After arriving at that Kentucky Farm on Sunday, California Chrome was X-rayed extensively.

With California Chrome’s X-rays all clean, the thinking is he may have possibly wrenched or strained his right knee, which then would explain his 29 1/2-length loss and the post-race swelling.

During his marvelous racing career, California Chrome did win such important events as the Grade I Kentucky Derby in 2014, Grade I Preakness Stakes in 2014, Group I Dubai World Cup (despite racing with a saddle that had slipped) in 2015 and Grade I Pacific Classic in 2015. However, he also did not win such other important events as the Grade I Belmont Stakes in 2014 (he finished in a dead heat for fourth), Grade I Breeders’ Cup Classic in 2014 (third), Grade I Breeders’ Cup Classic in 2016 (second) and Grade I Pegasus World Cup in 2017 (ninth).

With its $12 million purse, the Pegasus World Cup broke a world record by becoming the richest horse race ever run. When California Chrome did not win the race’s first prize of $7 million, he missed out in his chance to become the world’s wealthiest Thoroughbred of all time. A Pegasus victory would have increased California Chrome’s career bankroll to $21,502,652. But by finishing ninth in the Pegasus World Cup, he remains sixth on the list of the richest Thoroughbreds of all time:

California Chrome still does have the distinction of being North America’s all-time earnings leader…for now. Setting his sights on California Chrome regarding this list is none other than Arrogate, who has zoomed all the way up to third thanks to his $7 million Pegasus payday.

According to Equibase, these are the 10 leading money-winning Thoroughbreds to have made at least one start in North America through Jan. 30:

Arrogate is not Baffert’s only representative on the list of North America’s Top 10 all-time money earners. American Pharoah, who won the 2015 Triple Crown for Baffert, is No. 10.

It is quite a feat by Baffert that two Thoroughbreds he has trained, Arrogate and American Pharoah, have earned $19,734,900 combined.

As a result of such an important race as the Pegasus World Cup being run so early this year, the NTRA has conducted both the first Top Thoroughbred Poll and Top Three-Year-Old Poll earlier than in the past years. I think this is good, especially for the Top Thoroughbred Poll, which now will encompass more of the racing year.

Here is this week’s first NTRA Top Three-Year-Old Poll of 2017:

In the first Top Three-Year-Old Poll of 2015, American Pharoah ranked No. 4. Another Baffert trainee, Dortmund, was No. 1, followed by Carpe Diem at No. 2 and Upstart at No. 3. But it was American Pharoah, of course, who went on to become the first Triple Crown winner in 37 years.

The “All Others” option was the 5-2 favorite when wagering in Pool Two of the 2017 Kentucky Derby Future Wager (KDFW) closed last Sunday. In terms of individual horses, Grade I Breeders’ Cup Juvenile winner Classic Empire closed as the 5-1 favorite. The Pioneerof the Nile colt makes his 2017 debut in this Saturday’s Grade II Holy Bull Stakes at Gulfstream.

In the KDFW Pool One that closed on Nov. 27, the “All Others” option was the 6-5 favorite, with Classic Empire the 6-1 favorite among individual horses.

Here are the final odds for Pool Two of the 2017 KDFW:

On Track with Johnny D: Arro-Great!