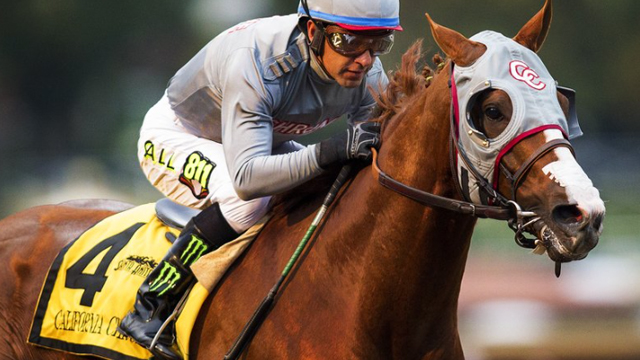 For his win in last Saturday’s $180,000 Winter Challenge at Los Alamitos, fan favorite California Chrome earned $50,000. The dominant victory in what is scheduled to be the penultimate start of his marvelous career boosted his total bankroll to $14,502,652.

According to Equibase, these are the 10 leading money-winning Thoroughbreds to have made at least one start in North America through Dec. 20:

A victory in the Pegasus World Cup will be worth $7 million. If California Chrome wins that race, he will increase his lifetime earnings to $21,502,652, which would break the world record for career earnings by a Thoroughbred.

According to the Oct. 15 edition of the Blood-Horse magazine, five horses — all retired — currently are ahead of California Chrome on the list of the world’s richest Thoroughbreds of all time:

Sent off as an overwhelming 1-20 favorite in the 1 1/16-mile Winter Challenge, California Chrome drew away to win by 12 lengths with regular rider Victor Espinoza aboard. The 5-year-old California-bred son of Lucky Pulpit returned $2.10 for a $2 win wager while registering the largest margin of victory in his 26-race career. His second-largest margin of victory is 7 1/4 lengths in the 2014 edition of the Grade II San Felipe at Santa Anita.

Point Piper was the second favorite in the Winter Challenge at 21-1. Earlier this year, he won Emerald Downs’ Grade III Longacres Mile, the most lucrative race in the Pacific Northwest. Though Point Piper was no match for California Chrome in the Winter Challenge, he did manage to finish second. The $1 exacta paid $2.80. Papacoolpapacool, who was 98-1 in the wagering, ended up third, 3 1/2 lengths behind Point Piper. Place and show betting was not offered. There was a minus win pool of $58,170.

“I was pretty nervous before the race,” Sherman said to Los Alamitos publicity after the Winter Challenge. “You know your horse is better than the others running in the race, but it is a horse race and anything can happen. Victor rode him with a lot of confidence. You could see he was much the best. I told Victor to keep him in the clear and don’t get into any trouble. He rode him like he was about 10 lengths the best horse. It was just perfect. Now I can relax and get him ready for the Pegasus.”

“The atmosphere here was just wonderful,” Sherman said. ‘It did my heart really good to be able to run him in front of Orange County people. They are such loyal fans. This was a great day for racing.”

California Chrome, whose myriad fans are known as “Chromies,” again has been selected to receive the Secretariat Vox Populi, or “Voice of the People,” Award. This award recognizes the horse whose popularity and racing excellence best resounded with the American public and gained recognition for Thoroughbred racing.

Penny Chenery, who bred and raced 1973 Triple Crown winner Secretariat, established the Vox Populi Award in 2010. This is the second time that California Chrome has received this particular award. He also was the 2014 recipient.

California Chrome was one of four 2016 nominees chosen by the Vox Populi Committee and Chenery. The other nominees selected by the committee were Beholder, Songbird and Tepin. Voters also had the option to write in a racehorse of their choice. In the online poll, California Chrome’s international appeal translated into widespread support from Vox Populi voters in more than 40 countries.

“The far-reaching participation we received from the year’s Vox Populi voters has been quite thrilling,” Chenery was quoted as saying in a press release. “The global enthusiasm and California Chrome’s repeat selection are testament to both his athletic excellence and his abiding appeal among racing fans. In both the sports and entertainment realms, we have seen some names repeatedly receive honors, and it is those stars who typically become the all-time greats in their field. I think we are seeing California Chrome’s emergence as an enduring racing celebrity propelling him to a new level of stardom.”

The Chenery family will present the custom-made Vox Populi trophy to the California Chrome team on Jan. 14 at Santa Anita. In conjunction with the award presentation, a special Vox Populi poster giveaway and autograph signing with the connections will be offered to the public.

When I recently was looking at the list of this year’s top Beyer Speed Figures by a 3-year-old, male or female, I was struck by the gap between Arrogate and the others.

For his dazzling Travers performance, Arrogate was assigned a 122 Beyer Speed Figure.

When Arrogate won the Grade I Breeders’ Cup Classic at Santa Anita Park on Nov. 5, he completed his 1 1/4-mile journey in 2:00 (2:00.11 in hundredths). The Kentucky-bred Unbridled’s Song colt prevailed by a half-length over California Chrome.

Arrogate received a 120 Beyer Speed Figure for his BC Classic triumph.

The next-best Beyer Speed Figure by a 3-year-old this year is Ten Blessings’ 106 when he won an allowance/optional claiming race at Santa Anita on Nov. 4 and Connect’s 106 when he won the Grade I Cigar Mile at Aqueduct on Nov. 26.

These are the top 2016 Beyer Speed Figures by a 3-year-old, male or female, recorded to date:

Thanks in large part to social media, the sad news spread like wildfire last Wednesday evening. Former jockey Garrett Gomez had been found dead “at a casino hotel near Tucson, Ariz.,” reported Daily Racing Form’s Jay Privman. According to a person “with knowledge of the situation,” Gomez, who would have been 45 on Jan. 1, “was the victim of an apparent overdose,” Privman further reported.

Found unconscious on the floor of a hotel room at the Casino Del Sol Resort and Casino, Gomez was pronounced dead at the scene, according to a follow-up story written by the Racing Form’s Matt Hegarty. Toxicology tests are expected to be completed “in the next several weeks, and an official cause of death has yet to be determined,” Hegarty reported.

Gomez, who won 3,769 races and two Eclipse Awards as outstanding jockey, missed all of 2003 due to substance abuse. He then resumed his riding career in 2004, the same year that I began writing this weekly column for Xpressbet in 2004. Gomez’s name would frequently appear in this column for the next several years.

For four straight years, from 2006-09, Gomez led the nation in purse earnings. His excellence in the saddle led to him being voted Eclipse Awards in 2008 and 2009.

Gomez forever will be remembered for his great ride on Blame when they collaborated to win the Grade I Breeders’ Cup Classic at Churchill Downs in 2010. Two days before that race, Gomez had been involved in a spill and suffered a broken clavicle, according to Ron Anderson, who was Gomez’s agent at the time. The painful injury significantly reduced the effectiveness of Gomez’s right arm. Nevertheless, Gomez and Blame won the 2010 Breeders’ Cup Classic when they defeated superstar Zenyatta by a head in a dramatic finish. Zenyatta came flying late after being far back early, but the fabulous mare finished second in what would be the only defeat in her 22-race career.

The 2010 Classic was one of Gomez’s 13 Breeders’ Cup victories. He is tied for third with John Velazquez on the list of Breeders’ Cup wins by a jockey, behind only Mike Smith (25) and Jerry Bailey (15).

Born in Tucson, Gomez rode his first winner, Furlong Circle, at the Downs at Santa Fe in New Mexico in 1988. He last rode in the autumn of 2013 at Keeneland. He announced his retirement in June 2015.

Gomez has been a Hall of Fame finalist in 2011, 2012, 2013, 2014 and 2016. He won many big races through the years for such Hall of Fame trainers as Bob Baffert, Bobby Frankel, Jerry Hollendorfer, Richard Mandella and Todd Pletcher.

During the time I was a broadcaster with HRTV from 2003 to 2015, I interviewed Gomez countless times. He was always friendly and cooperative. On the few occasions our paths crossed away from the track, I enjoyed chatting with him, especially about golf, which he loved to play.

When Gomez announced his retirement in 2015, he wrote on his Facebook page: “I would like to thank everyone in the sport of horse racing for all the support I ever received in my career. I enjoyed every horse I ever rode and I thank all of them for making my career. I’d like to apologize to all my fans for leaving the sport the way I did. Sometimes you have to do things in life for yourself. I’d like everyone to know I’m officially retired from the sport of horse racing. I thank everyone for all I achieved that had a part in my career. I had a lot of awesome moments in this game.”

On Track with Johnny D: Run On Fumes