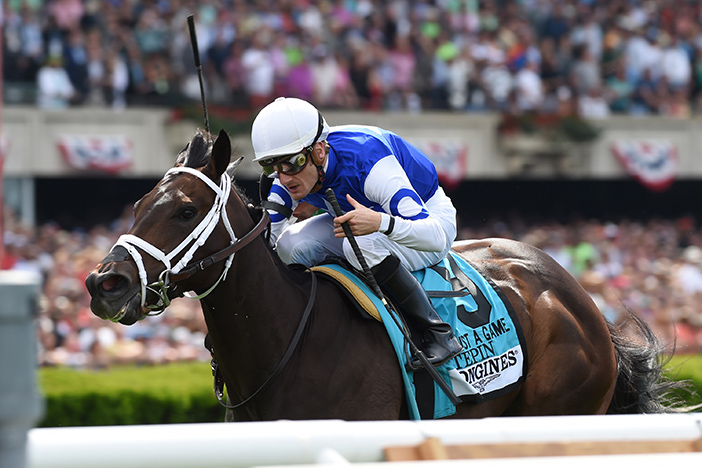 Below is how I plan to fill out my official Eclipse Award ballot for 2016, with the caveat that my decisions will not be absolutely final until the entire year is over. That is why I will not be submitting my ballot before until after racing this Saturday (Dec. 31) is completed.

Sent off as the 9-2 second choice in the BC Juvenile, Classic Empire staved off a late bid by 5-2 favorite Not This Time. These two finished well clear of everyone else in the field of 11. Practical Joke ended up third, 7 1/2 lengths behind runner-up Not This Time.

Not This Time was backed down to BC Juvenile favoritism following his 8 3/4-length triumph in the Grade III Iroquois at Churchill Downs on Sept. 17. Unfortunately, Not This Time’s racing career is over. On Oct. 21, it was announced that he had been retired due to a right front leg soft-tissue injury.

As for Classic Empire, trainer Mark Casse raved about the Kentucky-bred Pioneerof the Nile colt ever since he had won the Grade III Bashford Manor at Churchill on July 2 in his second career start. The Bashford Manor triumph had come after a debut win in the slop May 4 at Churchill. Casse was very confident that Classic Empire would win the Grade I Hopeful at Saratoga on Sept. 5, for which the colt was the 8-5 favorite. But in the youngster’s lone loss of the year, he took a right-hand turn immediately after the start and unseated jockey Irad Ortiz Jr.

Julien Leparoux had guided Classic Empire to his initial two career victories in Kentucky. They teamed back up for the Breeders’ Futurity, with blinkers added to the colt’s equipment because of what had happened at the Hopeful. On his best behavior for the Breeders’ Futurity, Classic Empire won that race as a springboard to his BC Juvenile triumph.

Mastery was three for three. He began his racing career by winning a maiden special weight race at Santa Anita on Oct. 22. Next, he took the Grade III Bob Hope at Del Mar on Nov. 19. And then he won the Grade I Los Alamitos CashCall Futurity by 7 1/4 lengths on Dec. 10.

Champagne Room highlighted her campaign by winning the Grade I BC Juvenile Fillies by three-quarters of a length at Santa Anita on Nov. 5. The Kentucky-bred daughter of Broken Vow won two of five starts. She also took the Grade II Sorrento at Del Mar on Sept. 3.

New Money Honey captured the Grade I BC Juvenile Fillies Turf at Santa Anita on Nov. 5. She also won the Grade III Miss Grillo on the turf at Belmont Park on Oct. 2.

Shane’s Girlfriend was two for two. She won a maiden special weight affair by 5 3/4 lengths at Santa Anita on Oct. 28, then registered a 13 1/4-length victory in the Grade III Delta Downs Princess on Nov. 19.

Arrogate, trained by Hall of Famer Bob Baffert, finished third when unveiled at Los Alamitos on April 17. After that, the Kentucky-bred Unbridled’s Song colt was unstoppable. Arrogate won his next five starts. Making his stakes debut in the Grade I Travers at Saratoga on Aug. 27 with just four races under his belt, he demolished the field to win by 13 1/2 lengths in 1:59 1/5 (1:59.36) in a Secretariat-like performance. His final time in the 2016 Travers shattered the track record of 2:00 established by General Assembly in the 1979 Travers.

In Arrogate’s next start after the Travers, he won the Grade I BC Classic by a half-length over older superstar California Chrome at Santa Anita on Nov. 5. No one else had been able to defeat California Chrome in his six previous 2016 starts.

I had a difficult time deciding who to vote for second and third in this category.

Nyquist was the leader in this division after he won the Grade I Kentucky Derby at Churchill on May 7 to remain undefeated in eight career starts. But he lost his remaining three 2016 races. In addition to the Kentucky Derby, Nyquist won the Grade I Florida Derby at Gulfstream Park and Grade II San Vicente at Santa Anita.

Exaggerator won three Grade I events during the year — the Santa Anita Derby, Preakness at Pimlico and Haskell Invitational at Monmouth Park. All three of those victories came on a sloppy track.

Songbird is a no-brainer in this category. Voted a 2015 Eclipse Award as champion 2-year-old filly, the Kentucky-bred daughter of Medaglia d’Oro was seven for seven in 2016 going into the BC Distaff at Santa Anita.

In an epic renewal of the BC Distaff, Songbird lost by a nose to the older Beholder, a three-time Eclipse Award winner.

European invader Queen’s Trust won the Grade I BC Filly & Mare Turf against older rivals at Santa Anita on Nov. 5.

California Chrome is a very easy choice for me in this category. Voted 2014 Eclipse Awards as Horse of the Year and champion 3-year-old male, he was six for six in 2016 going into the BC Classic at Santa Anita.

Prior to the 2016 BC Classic, California Chrome had won this year’s Grade II San Pasqual, Group I Dubai World Cup by 3 3/4 lengths (while racing with a saddle that had slipped), Grade II San Diego Handicap, Grade I Pacific Classic and Grade I Awesome Again.

In the BC Classic, California Chrome finished second, a half-length behind 3-year-old Arrogate.

Frosted won the Grade I Met Mile by 14 1/4 lengths at Belmont on June 11 in one of the finest performance of the year. He also won the Grade I Whitney. However, he finished fifth in the Dubai World Cup and sixth in the BC Classic.

Melatonin won the Grade I Santa Anita Handicap on March 12 and Grade I Gold Cup at Santa Anita on June 25. However, he finished fifth in the BC Classic.

Voting for Beholder is this category is about as easy as it gets for me. She capped her 2016 campaign with a nose victory over 3-year-old filly standout Songbird in the Grade I BC Classic at Santa Anita on Nov. 4. The great 6-year-old Beholder, a Kentucky-bred daughter of Henny Hughes trained by Hall of Famer Richard Mandella, also won the Grade I Adoration and Vanity Mile, both at Santa Anita, in 2016.

Stellar Wind won the Grade I Clement L. Hirsch at Del Mar on July 30 and Grade I Zenyatta at Santa Anita on Oct. 1, with Beholder second both times. However, Beholder defeated Stellar Wind in both the Vanity Mile and BC Distaff. Stellar Wind finished fourth after a poor start in the BC Distaff.

Cavorting won the Grade II Ruffian at Belmont on May 14, Grade I Ogden Phipps at Belmont on June 11 and Grade I Personal Ensign at Saratoga on Aug. 27.

It was a tough call for me in this category between a pair of Bob Baffert trainees, Drefong and Lord Nelson.

Lord Nelson likewise was four for four in 2016. The 4-year-old colt won three Grade I events — the Triple Bend at Santa Anita on June 25, Bing Crosby at Del Mar on July 31 and Santa Anita Sprint Championship on Oct. 8. Unfortunately, he had to miss the BC Sprint. Two days before the BC Sprint, Baffert announced Lord Nelson would be withdrawn because of a minor injury. Lord Nelson, Baffert said, “got a little nick and it became infected. We had to treat him with antibiotics. So he won’t be able to run.”

A.P. Indian won a pair of Grade I races in 2016 — the Alfred G. Vanderbilt Handicap at Saratoga on July 30 and Grade I Forego at Saratoga on Aug. 27. He also was victorious in the Grade II Phoenix at Keeneland and Grade III Belmont Sprint.

Finest City won the most important race in this category, the Grade I BC Filly & Mare Sprint at Santa Anita on Nov. 5. The 4-year-old Pennsylvania-bred filly, trained by Ian Kruljac, also won the Grade II Great Lady M. at Los Alamitos on April 23.

Constellation took the Grade I La Brea at Santa Anita on Monday in addition to her 2016 stakes wins in the City of Phoenix at Turf Paradise and Ruthless at Aqueduct.

Taris won the Grade I Humana Distaff at Churchill on May 7.

Flintshire, trained by Chad Brown, registered Grade I victories in the Manhattan at Belmont on June 11 and Sword Dancer at Saratoga on Aug. 27. He also won the Grade II Bowling Green at Saratoga. Flintshire finished second in his other two 2016 starts, losing the Grade I Joe Hirsch Turf Classic at Belmont to Ectot and the Grade I BC Turf at Santa Anita to Highland Reel. But Flintshire is my choice in the division for being a double Grade I winner and for never finishing worse than second in 2016.

Tourist, like Flintshire, was a double Grade I winner in 2016. He took the Grade I Fourstardave Handicap at Saratoga on Aug. 20 and Grade I BC Mile at Santa Anita on Nov. 5.

European-based Highland Reel won the Grade I BC Mile by 1 3/4 lengths in his only North American start.

A 2015 Eclipse Award winner as champion female turf runner, Tepin won six of eight starts in 2016 for trainer Mark Casse. The Kentucky-bred daughter of Bernstein was a Grade/Group I winner in three different countries this year. The 5-year-old mare took the Grade I Jenny Wiley at Keeneland on April 16, Group I Queen Anne against males at Royal Ascot in England on June 14 and Grade I Woodbine Mile, also against males, at Woodbine in Canada on Sept. 17.

In Tepin’s final 2016 start, she finished second in the Grade I BC Mile at Santa Anita, again against males. She had won the 2015 BC Mile at Keeneland.

Lady Eli was one of the best stories in American racing in 2016. In a remarkable comeback following a severe bout with laminitis, she won this year’s Grade I Flower Bowl at Belmont on Oct. 8. She then was narrowly denied in her attempt to become a two-time Breeders’ Cup winner. She finished second in this year’s Grade I BC Filly & Mare Turf at Santa Anita after having won the Grade I BC Juvenile Fillies Turf in 2014 at the Great Race Place.

One way I look at who should be Horse of the Year between California Chrome and Arrogate is they both lost once in 2016, but there is a huge difference in those two losses.

On Track with Johnny D: One Man, One Vote