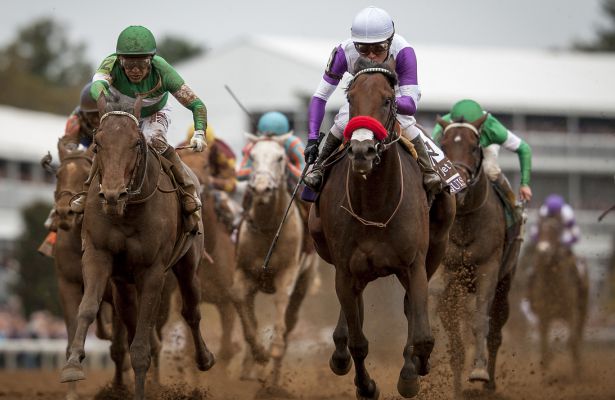 While the focus at this time of the year understandably is on 3-year-olds with designs on the Kentucky Derby, it was a breathtaking victory at Santa Anita Park last Saturday by a 3-year-old filly headed to the Kentucky Oaks that had many racing enthusiasts buzzing.

Also last Saturday, Miss Sky Warrior won the Gazelle for 3-year-old fillies at the Big A by 13 lengths. She was assigned a 94 Beyer Speed Figure while registering her fifth consecutive victory. Next up for Miss Sky Warrior is the May 5 Kentucky Oaks.

But while Miss Sky Warrior was quite impressive in the Gazelle, last Saturday’s most outstanding performance on the national racing stage occurred in the Santa Anita Oaks, a Grade I affair in which the lightly raced Paradise Woods annihilated a half-dozen opponents.

Ridden by Flavien Prat and trained by Hall of Famer Richard Mandella, Paradise Woods seized the lead at once and bowled along smoothly while setting the pace. She clicked off preliminary fractions of :23.46, :47.35, 1:11.48.

At the five-sixteenths pole midway on the far turn, Paradise Woods led by 1 1/2 lengths. They would not be able to get anywhere close to her after that. Paradise Woods drew off, with her advantage ballooning to 10 lengths at the eighth pole. That means Paradise Woods’ lead increased by 8 1/2 lengths in just the matter of three-sixteenths of a mile.

Paradise Woods received some left-handed encouragement during the stretch run, with Prat then taking his foot completely off the gas pedal toward the end. Completing her 1 1/16-mile journey in 1:42.53, Paradise Woods was all alone at the finish. She won by 11 1/4 lengths.

“She looked like she was just cruising out there,” Mandella was quoted as saying after the race by Santa Anita publicity. “She took my breath away.”

Owned by Steven Sarkowsky and Marty Wygod, Paradise Woods was sent away at 8-1, a price that now looks ridiculously generous. Abel Tasman finished second as the 4-5 favorite. It Tiz Well ended up third, followed in order by Mopotism, Majestic Quality, Bernina Star and Princess Karen.

Paradise Woods made the vanquished appear as if they all are riffraff, but they certainly are not. Abel Tasman is a Grade I winner. It Tiz Well is a Grade III winner. Mopotism is a stakes winner. Majestic Quality finished second in this year’s Grade II Rachel Alexandra at the Fair Grounds.

What made Paradise Woods’ performance all the more remarkable is she was taking a giant class leap to the Grade I level off a maiden victory. Not only that, the Kentucky-bred Union Rags filly was stretching out to 1 1/16 miles off a 5 1/2-furlong race. These would have been significant hurdles for most horses, but not for the Paradise Woods, who obviously is extraordinarily talented.

What Paradise Woods did in the Santa Anita Oaks while making her stakes debut in only her third lifetime start reminded me of what Arrogate did in last year’s Travers in his stakes debut with just four races under his belt. Arrogate won the Travers by 13 1/2 lengths and set a track record. That was a tip-off to subsequent victories by Arrogate in the Breeders’ Cup Classic, Pegasus World Cup and Dubai World Cup.

These are the Beyer Speed Figures for the winner of the Santa Anita Oaks going back to 1990:

With Paradise Woods, Miss Sky Warrior, Fair Grounds Oaks winner Farrell and Gulfstream Park Oaks winner Salty scheduled to clash in the 1 1/8-mile Kentucky Oaks, I am really looking forward to that race. But from what I saw last Saturday, I will be surprised if Paradise Woods does not win the Lillies for the Fillies.

In terms of strikes, this year’s Kentucky Derby is quite fascinating in that the winner of the Florida Derby (Always Dreaming), Wood Memorial (Irish War Cry) and Santa Anita Derby (Gormley) each have two strikes.

When I developed my Derby Strikes System back in 1999, the goal was to ascertain the chances of a horse to win the Kentucky Derby from both tactical and historical perspectives.

The system consists of nine key factors. When a horse does not qualify in one of the nine categories, the horse gets a strike. It is not until a horse has made his or her final start before the Kentucky Derby that one can determine a horse’s number of strikes. The nine key factors are explained at the end of this column.

Here is my current Kentucky Derby Top 10, with the number of strikes for each horse in parenthesis if now known:

According to the strikes system, any horse with three or more strikes has only a remote chance of winning the Kentucky Derby. Of the last 44 horses to win the Run for the Roses, the only one to have more than two strikes was Mine That Bird, who had four.

Because the race looks so wide open, I really think this just might be a year in which a foreign horse wins the Kentucky Derby. That’s why Thunder Snow current tops my Kentucky Derby list. He has class (a Group I winner in France), good dirt form (two for two) and zero strikes.

John Shirreffs, the last trainer to execute a Kentucky Derby with a two-strike horse, will be attempting to do so again 12 years later with two-strike Gormley. Shirreffs sent out two-strike Giacomo to win the roses in 2005.

According to the strikes system, an interesting aspect to Shirreff’s Kentucky Derby situation is that another horse he trains, Royal Mo, has a much better chance than Gormley to win the roses. Royal Mo, who finished third in the Santa Anita Derby, has only one strike. His lone strike is in Category 4.

Right now, however, Royal Mo is on the bubble in terms of having enough points to start in the Kentucky Derby. He has 30 points. The leading 20 point earners get into the race. Royal Mo currently ranks 22nd. On the other hand, Gormley is safely in the race. He ranks second with 135 points, topped only by Girvin’s 150.

These are the number of strikes for 19 Kentucky Derby candidates who are not scheduled to race again before the first Saturday in May:

ZERO STRIKES OR ONE STRIKE (The prime group)

TWO STRIKES (The victory is possible though it’s unlikely group)

State of Honor (Categories 2 and 7)

THREE OR MORE STRIKES (The victory is almost impossible group)

On Track with Johnny D: Join the Club

On Track with Johnny D: Nothing ‘Classic’ About It