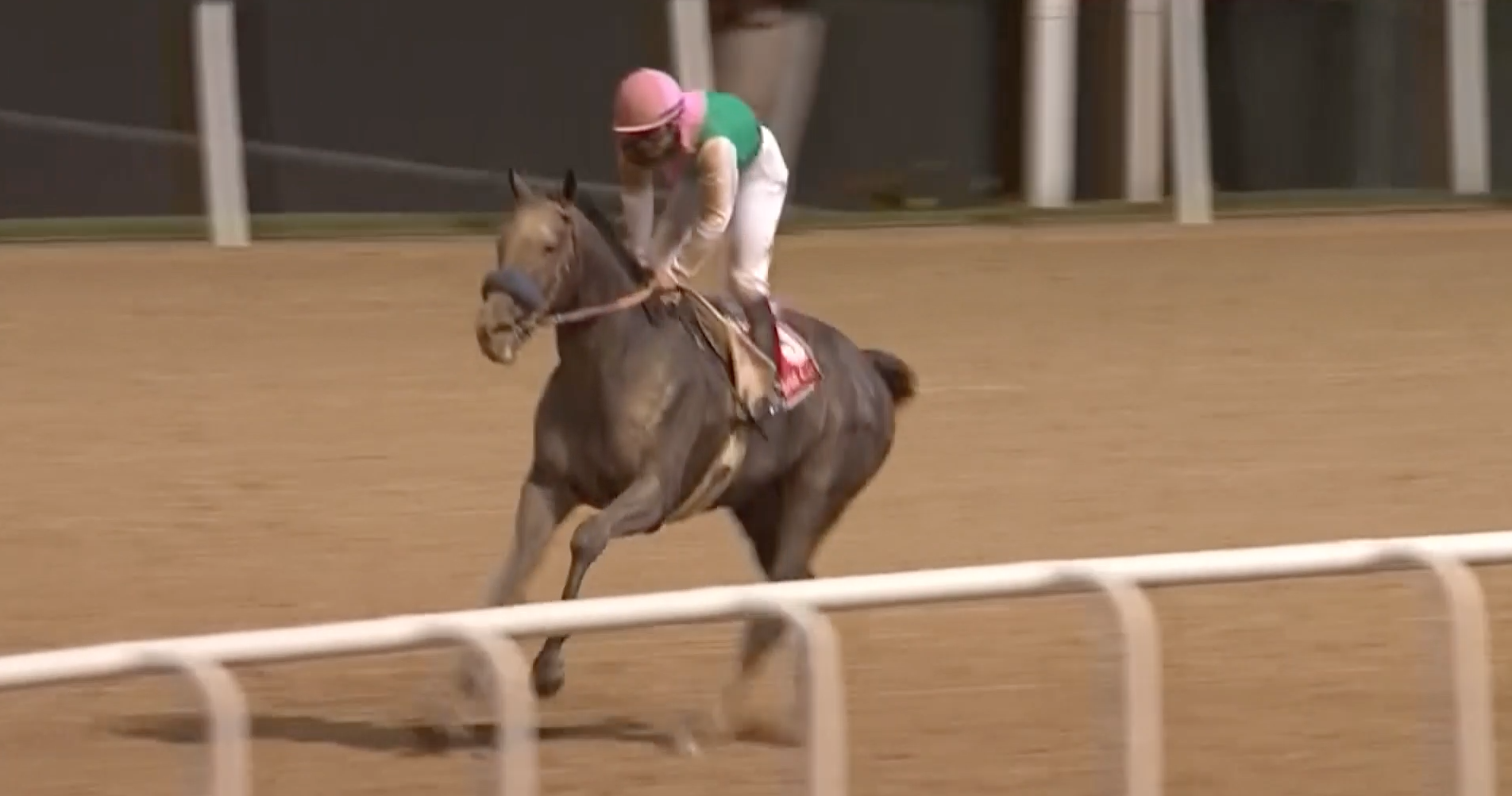 We are almost halfway through 2017. With that in mind, if there were such a thing as Eclipse Awards for the first half of the year, these would be my votes, excluding the 2-year-old, human and steeplechase categories:

I think Mastery was best 3-year-old male during the first half of 2017. He won the Grade II San Felipe Stakes by 6 3/4 lengths at Santa Anita Park on March 11 while posting a 105 Beyer Speed Figure to remain undefeated in four career starts. Unfortunately, Mastery emerged from that race with a “complete displaced condylar fracture” in his left front ankle, according to the New York Times’ Joe Drape, an injury that knocked the colt out of the Triple Crown races. Mastery required surgery for the insertion of three screws, Drape reported.

Mastery, undefeated in four career starts, has been retired from racing and will embark on a new career as a stallion at famed Claiborne Farm in Kentucky.

I am not voting for Mastery in this category because there were other 3-year-olds who accomplished more during the first half of the year. The San Felipe was Mastery’s only 2017 start.

Always Dreaming gets my vote off his victories in the Grade I Florida Derby and Grade I Kentucky Derby. The Kentucky Derby is the most important race in this category.

Classic Empire’s lone victory during the first half of the year came in the Grade I Arkansas Derby at Oaklawn Park.

Abel Tasman won the Kentucky Oaks and Acorn Stakes at Belmont Park. The way I see it, those two Grade I victories put her at the top of this category.

Unique Bella was three for three during the first half of the year, all at Santa Anita. She won the Grade II Santa Ynez Stakes by 7 1/2 lengths, Grade II Las Virgenes Stakes by 8 1/4 lengths and Grade III Santa Ysabel Stakes by 2 1/4 lengths on March 4.

While it is true that Unique Bella defeated Abel Tasman in the Santa Ynez, my vote in this category goes to Abel Tasman because she had two Grade I victories during the first half of the year, whereas Unique Bella had none.

This vote is as easy as it gets. Arrogate is two for two this year while winning races with purses of $12 million and $10 million.

After the Pegasus World Cup, Arrogate overcame a dreadful start to win the Group I, $10 million Dubai World Cup by 2 1/4 lengths in a tremendous performance.

Gun Runner won the Grade III Razorback Handicap by 5 3/4 lengths at Oaklawn Park and Grade I Stephen Foster Handicap at Churchill by seven lengths. In between those two triumphs, he finished second to Arrogate in the Dubai World Cup.

Stellar Wind gets my vote because she accomplished more than Songbird. Stellar Wind won a pair of Grade I events (Apple Blossom Handicap at Oaklawn and Beholder Mile at Santa Anita) while going two for two during the first half of the year. Songbird won a Grade I race (Ogden Phipps Stakes at Belmont) in her only 2017 start to date.

Yes, Mind Your Biscuits won the world’s richest sprint, the Group I Dubai Golden Shaheen, by three lengths. While I do take foreign races into account when voting for Eclipse Awards, I am not voting for Mind Your Biscuits in the category of mid-year male sprinter because he lost his only North American start during the first half of the year. He finished second in the Grade III Gulfstream Park Sprint. He has a very good chance to win the Grade II Belmont Sprint Championship on July 8. If he does win that, he would move to the top in this category for me.

The most impressive performance I saw by a sprinter in North America (“in North America” are the key words) was Disco Partner’s victory in Belmont’s Grade III Jaipur Stakes on the turf when he blazed five furlongs in 1:05.67 to establish “a course, North American, and world record time,” according to the official Equibase chart.

Whitmore won the Hot Springs Stakes and Grade III Count Fleet Sprint Handicap at Oaklawn as well as the Grade III Maryland Sprint at Pimlico before finishing third in the Grade II True North at Belmont.

Roy H won the True North. It was his third straight victory. It also was his first stakes win.

This vote for me is a no-brainer inasmuch as Paulassilverlining was a dual Grade I winner in her only two starts during the first half of the year. She won the Grade I Madison Stakes at Keeneland and Grade I Humana Distaff at Churchill.

Finley’sluckycharm was three for three during the first half of the year, all in stakes races at Churchill. She won the Roxelana, Grade III Winning Colors and Grade III Chicago Handicap.

By the Moon won two of three starts during the first half of 2017. After she finished a close second in the Grade II Barbara Fritchie at Laurel, she won both the Grade III Vagrancy Handicap and Grade III Bed o’ Roses at Belmont.

Bali a Bali was a dual Grade I winner during the first half of the year while winning two of his three starts. He won the Grade I Kilroe Mile at Santa Anita, ran fifth in the Grade I Turf Classic at Churchill, then rebounded and won the Grade I Shoemaker Mile at the Great Race Place.

Ascend and Divisidero each won one most important stakes races on the grass during the first half of the year. Ascend took the Grade I Manhattan at Belmont. Divisidero was victorious in the Grade I Turf Classic at Churchill.

Zhukova registered a six-length victory vs. males in the Grade I Man o’ War at Belmont.

Dickinson won the Grade III Suwannee River at Gulfstream, Grade II Hillsborough at Tampa Bay Downs and Grade I Jenny Wiley at Keeneland by a head over Lady Eli. But then Dickinson finished third in the Grade I Just a Game at Belmont.

MID-YEAR HORSE OF THE YEAR: 1. Arrogate.

My vote for 2017 Mid-Year Horse of the Year goes to Arrogate. He is gearing up for a summer campaign that might commence with Del Mar’s Grade II San Diego Handicap at 1 1/16 miles on July 22. Whether or not Arrogate starts in the San Diego, Del Mar’s Grade I Pacific Classic at 1 1/4 miles on Aug. 19 definitely is on his agenda.

With the first half of 2017 nearly over, racing enthusiasts are starting to look ahead in earnest to the highlight of the second half of the year, the Breeders’ Cup at Del Mar on Nov. 3-4.

The most recent BC Classic odds I have received from the Wynn Race Book in Las Vegas had Arrogate listed as the 4-5 favorite as of June 12.

Here are my current future odds for 14 BC Classic candidates:

Hall of Fame trainer Bob Baffert currently has an especially strong “team” of older horses led by Arrogate. It is sort of the equine equivalent of the NBA champions, the Golden State Warriors.

I’ll match up Baffert’s older horses with the Warriors this way:

On Track with Johnny D: By Any Other Name