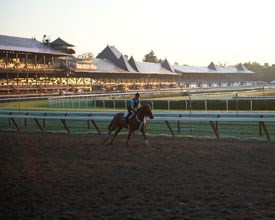 A year ago I made the point in this column that in light of Seattle Slew’s marvelous record at New York tracks, one would think one of those tracks would have a graded stakes race named in his honor. Yes, there is the ungraded Seattle Slew Handicap at Emerald Downs in the Pacific Northwest. But Seattle Slew never raced in that part of the country, whereas he won 10 of 11 starts at New York tracks.

So I must say that I was very pleased that the inaugural Seattle Slew Stakes was run at Belmont Park last Saturday. No, it is not a graded stakes race. But I do think it’s wonderful that the New York tracks at long last realized that the great Seattle Slew should be remembered each year by having a stakes race named after him.

Last Saturday’s race at Belmont Park honoring Hall of Famer Seattle Slew came down to a dramatic photo finish. Comfort, the 2-5 favorite with Hall of Famer John Velazquez aboard, won the 1 1/16-mile affair by a scant nose over Touchofstarquality.

As for Seattle Slew the racehorse, he certainly had a lot more than just a touch of star quality. Not only did he lose only one time in 11 Empire State starts, his lone defeat at a New York track is considered one of finest performances in defeat in the history of American racing.

In the Grade I Jockey Club Gold Cup at Belmont Park in 1978, Seattle Slew, with Angel Cordero Jr. riding, ran the first six furlongs in a scorching 1:09 flat. Perhaps one reason Seattle Slew set such a fast pace in the 1 1/2-mile event is Cordero had his right foot temporarily come out of the right iron on the first turn.

After Seattle Slew sped the first six furlongs in 1:09, he had every right to weaken toward the end of the race. Yet he actually was coming back on late in an ultra-game effort to lose by just nose to Exceller. Additionally, Seattle Slew had broken through the starting gate prior to the start. Very few horses win after doing that. Yet Seattle Slew still almost won the Gold Cup.

In New York in 1977, Seattle Slew did prove successful in a 1 1/2-mile race. He won the Belmont Stakes by four emphatic lengths to complete a Triple Crown sweep. He still has the distinction of being the only horse to ever win the Triple Crown while undefeated.

It was 40 years ago this week that trainer Billy Turner Jr. saddled Seattle Slew for his first lifetime start in a six-furlong maiden race at Belmont Park.

In the book “Seattle Slew,” Steve Cady wrote of the Bold Reasoning colt’s initial career race: “The program odds on Seattle Slew were 10-1, and none of the six Racing Form selectors had picked him.”

Seattle Slew ran in the fifth race. After the fourth race had been declared official, the tote board showed that Seattle Slew was the early 7-5 favorite for the fifth race, something of a surprise to many considering the colt’s 10-1 morning line. Seattle Slew would end up exiting the starting gate as the 5-2 favorite.

Seizing the lead at once, Seattle Slew registered a sparkling five-length victory under Jean Cruguet. The $17,500 yearling purchase then won a seven-furlong allowance affair at Belmont on Oct. 5. Even though he walked out the starting gate, he prevailed by 3 1/2 lengths as a 2-5 favorite.

With just two races under Seattle Slew’s belt, it was decided to run him in Belmont’s Grade I Champagne Stakes on Oct. 16. The Breeders’ Cup would not begin until 1984. When Seattle Slew started in the Champagne in 1976, that race essentially was the BC Juvenile of that time.

In the one-mile Champagne, Seattle Slew had to face the highly regarded For the Moment from the powerful LeRoy Jolley barn. Jolley had won the 1975 Kentucky Derby with Foolish Pleasure. Jolley also saddled the 2-5 favorite in the 1976 Run for the Roses, Honest Pleasure, who finished second to Bold Forbes.

Going into the 1976 Champagne, many believed Jolley had a strong contender for the 1977 Kentucky Derby in For the Moment. Seattle Slew was backed down to 6-5 favoritism in the Champagne, with For the Moment the 2-1 second choice in the field of 10.

Seattle Slew quickly opened a two-length advantage in the Champagne, with For the Moment stalking in second through the early stages. Turning for home, Eddie Maple sent For the Moment after Seattle Slew and Cruguet. For a moment, it looked like For the Moment might be on his way to victory. But Seattle Slew spurted away from the Jolley colt early in the stretch run. Seattle Slew then poured it on in the final furlong, coming home with gusto to win by almost 10 lengths. For the Moment finished second.

Not only did Seattle Slew win the Champagne in a tour de force, he completed one mile in 1:34 2/5. It was the fastest mile ever run by a 2-year-old.

“Seasoned observers shook their heads in admiration as he completed his mile in 1:34 2/5,” Joe Hirsch wrote of Seattle Slew’s Champagne triumph in the American Racing Manual. “Thirty-four years earlier, another free-running colt named Count Fleet won the Champagne with a 1:34 4/5 clocking that remained a record for 2-year-olds for many years. Count Fleet, of course, went on to sweep the Triple Crown races at 3.”

As a 2-year-old, Seattle Slew won all three of his races in the span of just 27 days.

Seattle Slew was voted a 1976 Eclipse Award as champion 2-year-old male, but his title came with considerable dissent. Many back then believed a horse needed to race more than just three times during the year to deserve getting an Eclipse Award.

As Cady noted in his book vis-à-vis Eclipse Award balloting for champion juvenile male of 1976, “there was disagreement among the voters, with Run Dusty Run and Royal Ski getting good support.”

Run Dusty Run and Royal Ski each made nine starts at 2. They each won six races. Run Dusty Run’s trainer, Smiley Adams, was irked when Seattle Slew was voted the Eclipse Award, according to Cady.

“Seattle Who?” Adams was quoted as saying. “It don’t matter how easy he did it, he only had three races. It’s not right.”

Not only did Seattle Slew’s 1976 Eclipse Award rub some people the wrong way, his Triple Crown sweep in 1977 evidently did not sit well with some of Secretariat’s biggest fans. Secretariat had won the Triple Crown four years earlier to end a 25-year drought.

In an HRTV interview in 2014, Turner told me that some of Secretariat’s biggest fans were very upset that Seattle Slew also had become a Triple Crown winner. Turner, much to my surprise, said that he actually received hate mail directed at Seattle Slew from the Secretariat lovers.

After Seattle Slew followed in Secretariat’s footsteps by proving successful in his quest for Triple Crown immortality, he suffered his first defeat in the 1977 Swaps Stakes.

The 1977 Swaps probably was the most famous race ever run at Hollywood Park, not counting the Breeders’ Cup. After Seattle Slew’s Triple Crown sweep, the undefeated colt arrived in Southern California with an aura of invincibility. But what the Hollywood crowd of 68,115 witnessed “was a race that may go down in history beside the defeat of Man o’ War by Upset and the day that Dark Star took the measure of Native Dancer,” Robert Hebert wrote in The Blood-Horse magazine. Seattle Slew finished fourth as the 1-5 favorite. J.O. Tobin blazed 1 1/4 miles in 1:58 3/5 and won by eight lengths. Seattle Slew finished 16 lengths behind J.O. Tobin.

Seattle Slew did not race again in 1977 after the Swaps. He was voted two more Eclipse Awards that year, one as champion 3-year-old male and another as Horse of the Year.

After the Swaps, Seattle Slew’s owners made a trainer change, with Doug Peterson taking over. As a 4-year-old, Seattle Slew earned another Eclipse Award as champion older male of 1978.

Seattle Slew retired from racing with 14 victories and two seconds from 17 starts. He ranked high on The Blood-Horse’s list of the Top 100 Racehorses of the 20th Century:

While the Breeders’ Cup at Santa Anita Park on Nov. 4-5 is getting closer and closer, the so-called “Road to the Kentucky Derby” will commence this Saturday.

Churchill Downs once again will utilize a points system to determine the 20 entrants for the 2017 Kentucky Derby, which will be run for the 143rd time on Saturday, May 6.

Churchill Downs this week announced its list of 35 races that comprise the 2016-17 Road to the Kentucky Derby. Points are awarded to the Top 4 finishers in these 35 races.

As has been the case for the past three years, the Road to the Kentucky Derby “Prep Season” will begin with this Saturday’s Grade III Iroquois Stakes at Churchill Downs. The 1 1/16-mile Iroquois, which has attracted a field of eight, also is a “Win and You’re In” Challenge event, which means the winner will receive an automatic berth in the starting gate for this year’s Breeders’ Cup Juvenile.5

When Churchill introduced its points system in June 2012, I said on HRTV that I believed the BC Juvenile deserved to be worth more points than the other races in the “Prep Season.” It took time for it to happen, but points for the BC Juvenile were doubled in 2015 to their present value.

The 19 races during the “Prep Season” for the Kentucky Derby are listed below:

The 16 races during the “Championship Series” for the Kentucky Derby are listed below:

The Japan Road to the Kentucky Derby features a pair of one-mile dirt stakes races at Tokyo Racecourse, the Cattleya Sho for 2-year-olds on Nov. 26 and Hyacinth for 3-year-olds to be run sometime early in 2017.

Points awarded to the Top 4 finishers in the Cattleya Sho will be 40-16-8-4, while the Hyacinth will have a point value of 50-20-10-5. The points were structured to avoid an automatic qualifier for the winner of one particular race over the other.