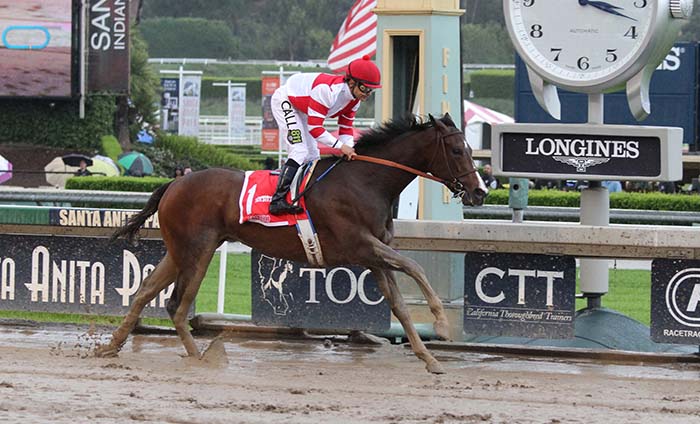 The prestigious Eclipse Awards were instituted in 1971 to honor the crème de la crème of Thoroughbred racing. These awards are named after the phenomenal racehorse Eclipse, who was undefeated in 18 lifetime starts prior to becoming a great sire in the 1700s.

By my count, a total of 348 different Thoroughbreds have won an Eclipse Award through the years, excluding the steeplechase category. And the only one of these 348 Eclipse Award winners to go 11-0 and win each of those 11 races by at least 3 1/2 lengths is Songbird.

Just four of the 348 Eclipse Award winners to date have won their first 11 starts. Interestingly, all four are females — La Prevoyante, Personal Ensign, Zenyatta and now Songbird following her 4 3/4-length triumph in last Saturday’s Grade I, $1 million Cotillion at Parx.

La Prevoyante’s smallest margin of victory in her first 11 starts was 1 1/4 lengths. She was voted a 1971 Eclipse Award as champion 2-year-old filly.

Personal Ensign’s smallest margin of victory in her first 11 starts was a head. She was voted a 1988 Eclipse Award as champion older female.

Owned by Rick Porter’s Fox Hill Farms and trained by Hall of Famer Jerry Hollendorfer, Songbird completed her 1 1/16-mile Cotillion journey in 1:44.02 with Hall of Famer Mike Smith once again in the saddle. The Medaglia d’Oro filly was assigned a 99 Beyer Speed Figure. Her career-best Beyer is the 101 she recorded in the Grade I Coaching Club American Oaks on July 24 at Saratoga when she won by 5 1/4 lengths. Carina Mia also was the runner-up in the CCA Oaks.

Songbird’s 101 in the CCA Oaks has been the only triple-digit Beyer Speed Figure she has posted in her 11 career starts. But keep in mind she has won the vast majority of her races with such ease that it has kept her speed figures lower than they otherwise would have been. Beyer Speed Figures do not take into account how much a horse appears to have been asked to run.

According to the American Racing Manual, these are the Beyer Speed Figures for winners of the Cotillion going back to 1990:

You will see that Havre de Grace is on the above list. Porter also owned her. After Havre de Grace took the Cotillion in 2010, she would go on to be voted 2011 Eclipse Awards as Horse of the Year and champion older mare. Larry Jones conditioned Havre de Grace.

Not only does Songbird still have a perfect record, she has won at distances from six furlongs to 1 1/4 miles. She also has won races on the dirt at five different tracks — Del Mar, Santa Anita, Keeneland, Saratoga and Parx.

Up next for Songbird is the Grade I Breeders’ Cup Distaff at Santa Anita on Nov. 4. Beholder, Stellar Wind and Cavorting also are eyeing that 1 1/8-mile event.

Cavorting, who has won three straight, is currently the top-ranked older female on the East Coast. She won the Grade II Ruffian Stakes on May 14, Grade I Ogden Phipps Stakes on June 11 and Grade I Personal Ensign Stakes on Aug. 27. The BC Distaff will be her next start.

SONGBIRD MOVES UP TO NO. 3 IN NTRA POLL

Following Songbird’s win in the Cotillion, she moved up a notch in the NTRA Top Thoroughbred Poll this week to No. 3. Flintshire dropped from No. 3 to No. 4. The top four horses in the poll are a combined 21 for 21 this year.

No. 1 California Chrome is entered in this Saturday’s Grade I Awesome Again Stakes at Santa Anita. The popular 5-year-old California-bred superstar is coming off a smashing five-length win in the Grade I Pacific Classic at Del Mar on Aug. 20. Earlier this year, the son of Lucky Pulpit won the Group I, $10 million Dubai World Cup on March 26 even though he raced with a saddle that had slipped.

Back on May 7, Connect graduated from the maiden ranks with a four-length win on a muddy track in a 6 1/2-furlong race at Belmont Park. That same day at Churchill Downs, Nyquist won the Kentucky Derby, with Exaggerator second and Gun Runner third.

In last Saturday’s Grade II, $1.25 Pennsylvania Derby at Parx, Connect demonstrated that he is a bona-fide up-and-comer in the national sophomore ranks by registering a half-length win over Gun Runner. Nyquist finished sixth in the 1 1/8-mile affair, with Exaggerator seventh.

Connect, ridden by Javier Castellano and trained by Chad Brown, races for Paul Pompa Jr. The Curlin colt now has won four of six career starts. Connect has lost just once in five starts this year, finishing sixth in the Grade I Travers Stakes on Aug. 27. Arrogate broke Saratoga’s 1 1/4-mile track record in the Travers. Connect wound up 21 3/4 lengths behind Arrogate on that occasion.

On Steve Byk’s radio program “At the Races” Monday, Pompa said Connect was scoped after the Travers and found to have mucus, though he conceded his colt was not going to beat Arrogate anyway the way Arrogate “freaked” that day.

Pompa went on to say Connect will not run in the Grade I BC Classic at Santa Anita on Nov. 5 and also probably will not go in the Grade I BC Dirt Mile at that track on Nov. 4. More likely, Pompa said, is either the Grade I Cigar Mile at Aqueduct on Nov. 26 or Grade I Clark Handicap at Churchill Downs a day earlier.

Nyquist had an 8-0 record after winning the Kentucky Derby on the first Saturday in May. Since then, however, he is winless in three starts. In fact, Nyquist has not even finished first or second since his victory in the the Run for the Roses last spring.

After the Kentucky Derby, Nyquist finished third in the Grade I Preakness Stakes on May 21. He then ran fourth in the Grade I Haskell Invitational at Monmouth Park on July 31. The track was sloppy for both the Preakness and Haskell. But the track was fast, not wet, for last Saturday’s Pennsylvania Derby, yet Nyquist lost again, finishing sixth as the 13-10 favorite.

Nyquist now has defeated Exaggerator in five of the seven races in which they have clashed. The only two times Nyquist has been beaten by Exaggerator was when the track was wet.

Exaggerator’s lackluster Pennsylvania Derby performance did nothing to dispel the notion that it is a huge plus for him when a track is wet. He now is 0 for 6 this year when competing on a fast track and 3 for 3 when racing on a wet surface.