Its’ Post Time by Jon White: Two Down, One To Go For Justify 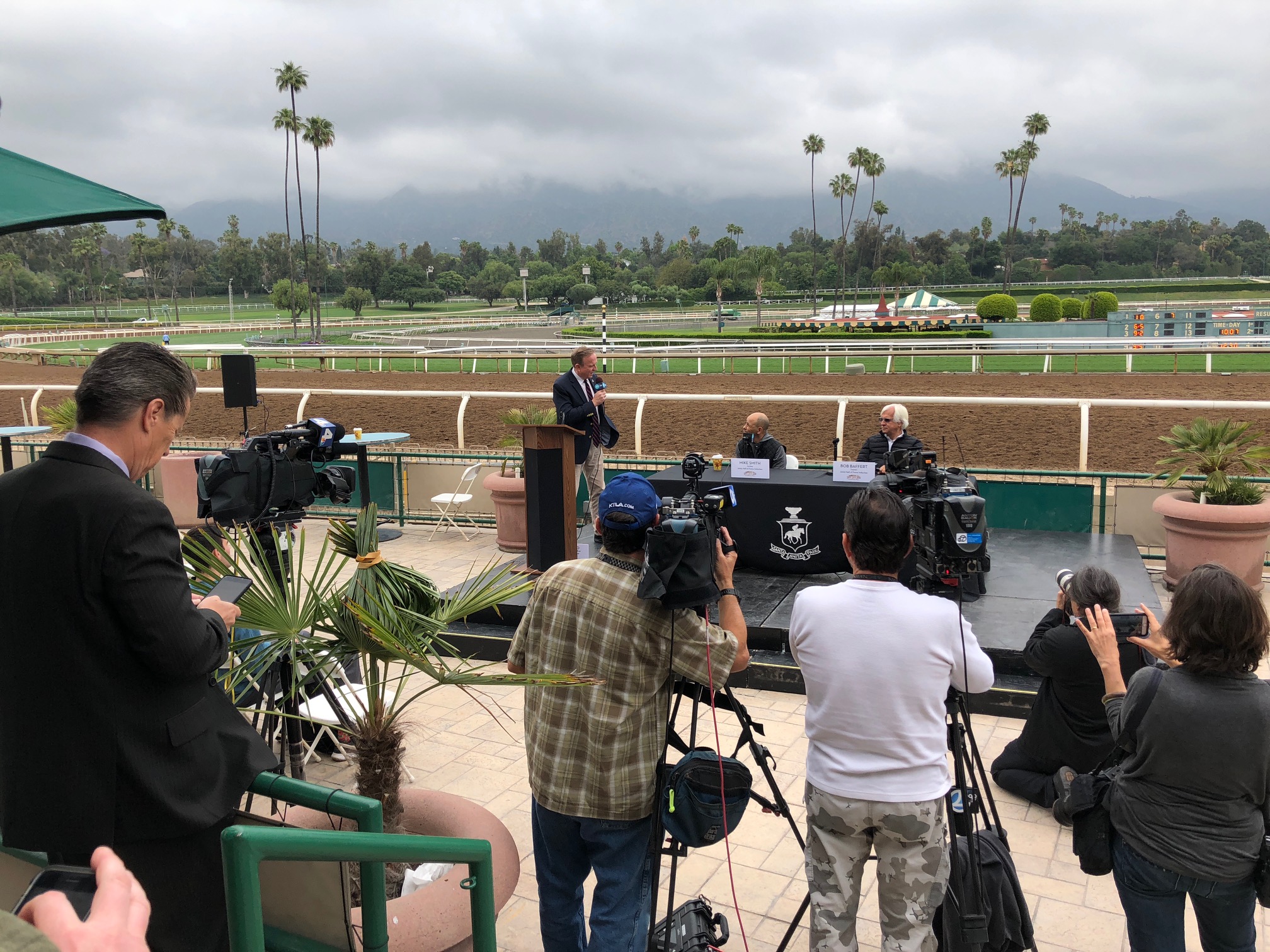 It is a meteoric rise to superstardom that is nothing less than astonishing.

Justify made his first career start on Feb. 18 at Santa Anita Park. And now, after having won the May 5 Kentucky Derby and last Saturday’s Preakness Stakes, he sets his sights on the June 9 Belmont Stakes and its demanding 1 1/2 miles in a bid to become the sport’s 13th Triple Crown winner.

When Justify won the Kentucky Derby, he became only the second horse to win it without having raced as a 2-year-old. It had not been done since Apollo in 1882.

But if Justify wins the Belmont, he will make Triple Crown history. He goes into the Belmont having made just five previous career starts. If he does indeed complete the sweep, he will have the distinction of being the Triple Crown winner to have made the fewest lifetime starts prior to the Belmont.

The number of previous career starts prior to the Belmont for each Triple Crown winner is listed below:

It seems that many are taking a glass-is-half-empty view vis-a-vis Justify and the Belmont in the wake of his half-length victory in the 1 3/16-mile Preakness on a sloppy track. Justify himself bears some of the responsibility for this negativism after setting the bar so high when winning his first four career starts by an average of five lengths.

In light of Justify’s stellar 2 1/2-length victory on a sloppy track in the 1 1/4-mile Kentucky Derby, expectations certainly were lofty in Baltimore, perhaps unrealistically so. Thus, after Justify won the Preakness by only a half-length, many derided his performance.

True, the Preakness was not Justify’s best race. But it was a whole lot better than the half-length margin of victory suggests.

It is extremely difficult for a horse to win any race, let alone a classic at 1 3/16 miles, without ever getting a breather. And Justify was pushed hard for every step of the Preakness. Good Magic took it to Justify right away, with the two them vying for the lead all the way until the final sixteenth.

Yes, the preliminary fractions in the Preakness of :23.11 and :47.19 were much saner than the wicked splits of :22.24 and :45.77 in the Kentucky Derby. According to television commentator Randy Moss, Justify ran the fastest opening quarter of any Kentucky Derby winner in the 144-year history of the race.

If Justify had been all alone in front while running the first quarter of the Preakness in :23.11 and half in :47.19, that would have been one thing. But he did so while locked in a head-and-head duel with Good Magic, the Eclipse Award-winning 2-year-old male champion of 2017. In other words, regardless of the :23.11 and :47.19 fractions, it was no leisurely pace being set by Justify.

The duel between Justify, the 2-5 favorite, and Good Magic, the 7-2 second choice, continued on for furlong…after furlong…after furlong. Just inside the sixteenth pole, it appeared for a brief moment that Justify was in good shape. He had increased his lead to about a length after finally racing Good Magic into submission. But in the final yards, after Justify had worked so hard to finally put away Good Magic, the overwhelming favorite now had to hold off late charges from Bravazo and Tenfold.

Most horses would have won the battle with Good Magic only to then lose the war. But Justify demonstrated once again he is not like most horses. He had enough gas left in the tank approaching the finish to win the war by staving off both Bravazo and Tenfold.

Bravazo, who lurked a close third early, dropped back to fifth coming into the stretch. He then surged late to finish second at 15-1 while giving Justify a pretty darn good scare. Tenfold, off at 26-1, finished third, a neck behind Bravazo.

It was a fine effort in defeat by Tenfold, who came into the Preakness with even less racing experience than Justify. Tenfold had made only three lifetime starts before the Preakness. His sire, Curlin, had raced just four times prior to winning the 2007 Preakness.

In this year’s Kentucky Derby, Good Magic ran his heart out all the way down the stretch when trying in vain to close the gap on the leading Justify. Good Magic again showed his mettle in the Preakness. Even though he could not keep up with Justify in the final sixteenth, Good Magic certainly did not disgrace himself. Good Magic held on well enough to lose by only a length while finishing fourth.

SMITH SAYS MARGIN COULD HAVE BEEN LARGER

Mike Smith rode Justify in the Preakness. This was his second Preakness victory. Smith also won the 1993 edition aboard Prairie Bayou.

On Mike Willman’s radio program Thoroughbred Los Angeles last Sunday, Smith talked about how the Preakness early on turned into a match race between Justify and Good Magic.

“After we went underneath the wire the first time, the race was on,” Smith said, adding that it pretty much was a match race “from all the way down the backside, around the [far] turn, until I finally put him away [in the final sixteenth].”

Smith went on to say that in the final sixteenth, after they had put away Good Magic, he was trying to ask Justify as little as possible while still winning the race.

“I peeked under my shoulder and didn’t see anybody,” Smith said. “I just wanted to get him home safe and sound. I didn’t want to get after him or make him do any more than he had to do. And maybe I was trying to save him a little too much. I made it a little closer than I liked to. But the good ones find a way to get it done. It takes a whole lot to do what he did. That was his fifth race. That’s pretty incredible.

“If I had kept my foot on the gas, he would have won by farther. I had Good Magic beaten. Of course, I wasn’t expecting anyone to come flying the way the Lukas horse [Bravazo] did. [Bravazo] ran a tremendous race.”

Justify “wanted to gallop out” after the finish, according to Smith.

This year’s Preakness will be remembered for being run in a rather eerie London-like fog. As for the condition of the track, Smith said it was “very slippery, very slick.” Smith said Justify was “slipping a lot” while having to “fight with Good Magic” for most of the race. Smith also said that more than once, Justify jumped tracks that were on the wet surface.

“They pull a ramp over [the track] so the people can walk back and forth [into the infield] and that leaves these tracks,” Smith said. “And man, he jumped the tracks crossing under the wire the first time.”

A wonderful photo tweeted by Barbara Livingston shows Justify from a head-on angle with all four of his legs off the ground as he was jumping the tracks coming through the stretch the first time.

Smith said Justify also “jumped some tracks on the backside.”

It was evident that the inside paths were the worse part of the track all day at Pimlico. That’s because the way the jockeys were riding in every main-track race on the card, it was if an invisible rail existed a few paths out from the actual rail.

Good Magic and jockey Jose Ortiz were several paths away from the inside rail on the backstretch while racing to the inside of Justify and Smith.

Rather than hold his ground, Smith said he allowed himself to be continually floated out because he “was trying not to get into any kind of a bumping match” and that he “was trying to stay clear and clean.”

While many came away disappointed that Justify did not win by more than he did, Smith was impressed that the colt was able to prevail when he was tested more than he ever had been before.”

“It ain’t always pretty,” Smith said. “Sometimes you gotta win ugly. Even the great Secretariat got beat. This is a horse who was in a dogfight for a good seven-eighths of a mile and still held off the competition. We should be commending him and not looking at him winning by only half a length.

“So many great horses we’ve seen win by a length, a half a length, a nose sometimes. Even the great Zenyatta won most of her races by a nose or a head. It’s just part of it, but people expected [Justify] to draw off and win by 10. Well, he showed more to me than drawing off and winning by 10. That was very impressive for him to get into a dogfight and prevail. We’ve seen him draw off and win so many times that you didn’t know what would happen when someone looked him in the eye.”

Ed McNamara put it well in the story he wrote for Newsday: “There was never any doubt about Justify’s talent. The only unknown about the big chestnut colt was how he would react when pushed to the limit. On Saturday, we found out.”

BAFFERT STILL PERFECT IN THIS SITUATION

Many, including yours truly, consider Woody Stephens’ five straight Belmont Stakes victories to be the greatest training feat in American racing history. Stephens won the Belmont with Conquistador Cielo in 1982, Caveat in 1983, Swale in 1984, Creme Fraiche in 1985 and Danzig Connection in 1986.

Bob Baffert still has a perfect record when running a Kentucky Derby winner in the Preakness. He is five for five when doing this. I think it certainly ranks right up there among the finest training accomplishments of all time. Baffert now has won both the Kentucky Derby and Preakness with Silver Charm in 1997, Real Quiet in 1998, War Emblem in 2002, American Pharoah in 2015 and Justify this year.

American Pharoah would go on to capture the Belmont Stakes to become the first Triple Crown winner since Affirmed in 1978.

Thanks to Justify, Baffert has increased his total of Preakness victories to seven. He also won it with Point Given in 2001 and Lookin At Lucky in 2010. Baffert has moved into a tie with Robert Wyndham Walden for the most wins in the Preakness by a trainer. Walden set the record in the 1880s.

Additionally, after this year’s Preakness, Baffert is tied with D. Wayne Lukas for the most wins in a Triple Crown race. They each have 14. Baffert, of course, appears to have an excellent chance to up his total to 15 when Justify runs in the upcoming Belmont.

These are the final times for Baffert’s seven Preakness winners:

Justify was assigned a career-low 97 Beyer Speed Figure for his Preakness victory. It was the first time he has not recorded a triple-digit Beyer. It was 10 below his high of 107 when he won the Santa Anita Derby by three lengths. His previous low was 101 when he cruised to a 6 1/2-length victory in an allowance/optional claiming race in the mud at Santa Anita. He posted a 103 Beyer in his 2 1/2-length Kentucky Derby win on a sloppy strip at Churchill Downs.

These are the Beyer Speed Figures for Baffert’s seven Preakness winners:

Here are the Beyer Speed Figures for the Preakness winners going back to 1991:

BELMONT STAKES ODDS AT THE WYNN

Here are the odds to win the Belmont Stakes listed at the Wynn Race Book in Las Vegas as of today (May 23):

Its’ Post Time by Jon White: Two Down, One To Go For Justify

Its’ Post Time by Jon White: Tall Order To Defeat Justify in Preakness