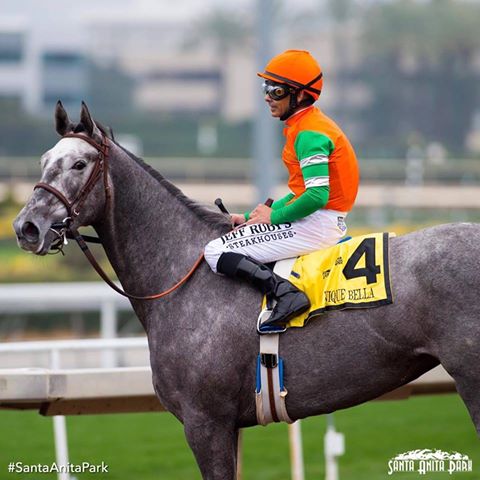 Early in 2017, while Unique Bella was on her way to an absurdly easy victory in last Sunday’s Las Virgenes Stakes at Santa Anita Park, I found myself thinking of how much she reminds me of Winning Colors.

Winning Colors was a big, enormously talented gray filly. So is Unique Bella. Not only that, there is a striking similarity between their records at this stage of their careers.

Winning Colors made an auspicious career bow with a 2 1/2-length win for trainer D. Wayne Lukas in a seven-furlong maiden race as a 2-year-old at the 1987 Saratoga meet. In her only other start at 2, she won a six-furlong allowance affair by 3 1/2 lengths at Santa Anita Park on Dec. 27.

Goodbye Halo was an outstanding filly in her own right. She would go on to win the Kentucky Oaks, Mother Goose Stakes and Coaching Club American Oaks.

Late in 1988, undefeated Personal Ensign improved her lifetime record to 13-0 in the final start of her career when she came on relentlessly on a muddy Churchill Downs track and won the Breeders’ Cup Distaff by a nose over Winning Colors. It was one of the most dramatic finishes in the history of American racing. What few people remember is Goodbye Halo finished third, only a half-length behind Winning Colors, in the 1988 BC Distaff.

“WINNING COLORS, away in alert fashion, established the early pace while under a snug rating hold, drew away on the far turn when asked somewhat, entered the stretch with a commanding lead, responded when roused with the whip periodically left handed from the top of the stretch to midstretch, maintained a commanding advantage from midstretch to the finish while under a brisk hand ride and was a decisive winner.”

After the Santa Anita Derby, Winning Colors made headlines when she won the 1 1/4-mile Kentucky Derby on May 7 by a neck. Forty Niner closed strongly to finish second. Risen Star, who was full of run late after racing extremely wide into the stretch, ended up third, three lengths behind Forty Niner.

Winning Colors remains one of just three fillies to have ever won the Kentucky Derby. The first was the great Regret in 1915. The second was Genuine Risk in 1980.

Unique Bella, trained by Hall of Famer Jerry Hollendorfer, finished second as a 1-5 favorite in a five-furlong maiden race when unveiled at Santa Anita last June 23. She then went to the sidelines with tender shins.

Following Unique Bella’s defeat in her career debut, she now has won three straight laughers. The daughter of Tapit and 2010 BC Distaff winner Unrivaled Belle registered a 10 1/4-length maiden victory at 6 1/2 furlongs Nov. 26 at Del Mar. She followed that with an effortless 7 1/2-length win in Santa Anita’s Santa Ynez Stakes at seven furlongs on Jan. 8.

Unique Bella was nowhere close to even money in the Las Virgenes. She was pounded down to 1-10 favoritism. She sat in third early while relaxing nicely for jockey Mike Smith, then gained the lead nearing midway on the backstretch. After sporting a 2 1/2-length lead on the far turn with a quarter-mile to go, Unique Bella “drew off in the stretch without encouragement,” as accurately noted in the official Equibase chart. She won by 8 3/4 lengths.

Mopotism finished second. Also left in Unique Bella’s wake was none other than Champagne Room, the 2016 Eclipse Award-winning 2-year-old filly. Champagne Room had to settle for third in the Las Virgenes while making her first start since winning the BC Juvenile Fillies last Nov. 5.

Unique Bella’s final time in her Las Virgenes victory was 1:35.66. Her Beyer Speed Figures continue their upward trajectory. Unique Bella was assigned a 73 Beyer when defeated at first asking, an 87 in her maiden win, a 91 in the Santa Ynez and a 98 in the Las Virgenes.

Hollendorfer and Smith also collaborated to win the 2016 Las Virgenes with Songbird, who was making her first start of the year. I wrote that after Songbird had a 10-length lead with a furlong to go, “Hall of Fame jockey Mike Smith was cognizant that there was absolutely no need to ‘run up the score’ in the final furlong with the overwhelming favorite. Smith allowed Songbird to canter home to a 6 1/2-length triumph in 1:36.84.”

Songbird was assigned a modest 87 Beyer Speed Figure for her Las Virgenes victory. I wrote that it was yet another example in which it would have been a truer reflection of Songbird’s performance if a + were added to her Beyer because she was far from all out. When a horse wins a race and is far from all out to do so, Beyer Speed Figures do not take that into account.

As far as I am concerned, Unique Bella’s Beyer Speed Figures are as follows: 73 when she was defeated at first asking, 87+ in her maiden win, 91+ in the Santa Ynez and 98+ in the Las Virgenes. In other words, in all three of her victories, Unique Bella has been far from all out.

Classic Empire, winner of last year’s BC Juvenile and voted a 2016 Eclipse Award as champion 2-year-old male, was a dominant No. 1 in last week’s first NTRA Top Thoroughbred Poll of 2017. He received 28 of the 30 first-place votes cast.

But the national 3-year-old picture changed dramatically and became quite muddled after Classic Empire struggled home a well-beaten third as a 1-2 favorite in last Saturday’s 1 1/16-mile Holy Bull Stakes at Gulfstream Park.

Irish War Cry led past every pole in the Holy Bull to remain undefeated in three career starts. Early in 2007, his sire, Curlin, made a sensational career debut at Gulfstream when he won a seven-furlong maiden race by 12 3/4 lengths. Curlin would go on to be voted Horse of the Year in 2007 and 2008.

Classic Empire was a washy mess before the Holy Bull. I can’t help but wonder if a lot of NTRA Top Three-Year-Old Poll voters also may have been sweating profusely when trying to figure out which 3-year-old to put at No. 1 on their ballot this week.

Who is the best 3-year-old in the land right now? In my opinion, it’s Unique Bella. Think of it this way. What if all of the leading 3-year-olds ran in the same race today? Who would be the betting favorite? I believe it would be Unique Bella.

And who deserves the top spot in the NTRA Top Three-Year-Old Poll this week? In my opinion, it is Unique Bella.

Only five of the other 41 voters this week also put Unique Bella at No. 1 on their ballot. Irish War Cry, who was No. 27 last week, zoomed all the way up to the top spot in the poll this week.

There is no lack of clarity in the NTRA Top Thoroughbred Poll, with Pegasus World Cup Invitational winner Arrogate again receiving all the first-place votes this week:

This is my first Kentucky Derby Top 10 of 2017 (again, this is how I rank horses in terms of how I view their chances to win the Run for the Roses):

As I wrote last week, many questioned the accuracy of Arrogate’s official Pegasus World Cup final time of 1:47.61 in hundredths, or 1:47 3/5 in fifths, in the belief it actually was faster.

“No major track has had as much in the way of timing issues through the years as Gulfstream,” I wrote. “Would I be surprised if Arrogate’s official final time of 1:47.61 is wrong? No.”

Two days later, on Feb. 3, it was announced the final time for the Pegasus World Cup had been changed.

“A correction has been made to the official finish time for the 1 1/8-mile Pegasus World Cup (G1) run at Gulfstream Park on January 28, 2017,” a press release stated. “Upon subsequent detailed review of the race performance data, it has been determined that the winning horse ARROGATE (Unbridled’s Song) finished the race in 1:46.83. The finish time sets a Gulfstream Park track record for the 1 1/8-mile race run on the dirt surface (previous track record at this distance held by LEA at the 2014 Donn Hcp in 1:46.86).

“Gulfstream Park employs Trakus for its tracking and timing services…Trakus regrets the incorrect reporting of the finish time and apologizes for any inconvenience caused to our partner, Gulfstream Park, their fans and horsemen, and all industry stakeholders.”

The $12 million Pegasus World Cup, the richest horse race in history, was run on Jan. 28. But Arrogate did not get credit for his actual final time or get his due for breaking a track record until six days later. This means Arrogate now has set a track record in two of his last three starts. He also broke Saratoga’s 1 1/4-mile track record by four-fifths of a second when he won the Travers Stakes by 13 1/2 lengths in 1:59 1/5 (1:59.36).

By comparison, when someone ties or breaks a time record in swimming at the Olympics, it is known immediately. It does not reflect well on horse racing as a sport when it takes six days to get the correct final time of the richest horse race ever run. But, hey, at least it took only six days in this instance instead of the 39 years it took to get Secretariat’s correct final time of 1:53 instead of 1:54 2/5 for the 1973 Preakness Stakes.

On Track with Johnny D: Arro-Great!

On Track with Johnny D: This Time of Year