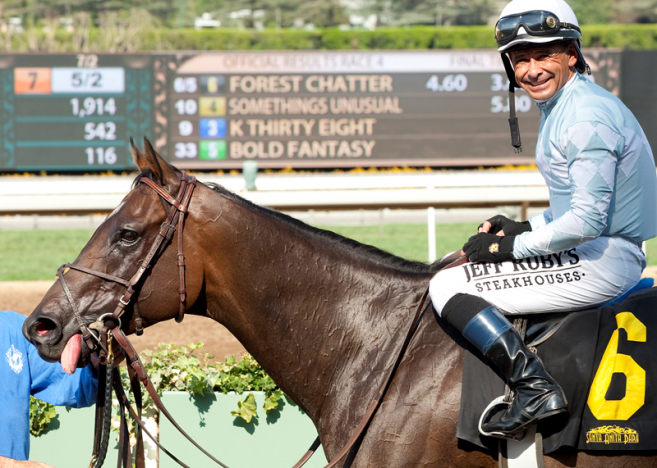 1st race: The Saturday program begins with a six-runner $32,000 claiming sprint for 3-year-olds. #3 Nusret seems realistically spotted after winning a starter’s allowance race in gate-to-wire style earlier this month in a race that already has produced a next-out winner.

The Jeff Bonde-trained colt took advantage of a front-running trip in that race and based on the lack of speed he’ll face today the son of Lucky Pulpit should be tough right back.

#4 Chris and Dave represents stranger danger; the David Jacobson-trained gelding has form at Gulfstream Park that charts well in this spot and he should have enough speed to stay within striking range of Nusret throughout. We’ll use both in our rolling exotics.

2nd race: The second race is a deep and competitive allowance race over a mile on turf for fillies and mares and requires a spread in rolling exotic play. #2 Dressed to a T moves up a notch on the class ladder seeking her third straight win after graduating at Del Mar in November and then defeating entry-level state-bred foes over this course last month. The lightly-raced daughter of Square Eddie likely has further improvement in her, and even though she’s backing up from nine furlongs to a flat mile today, the Ben Cecil-trained filly looks capable of producing the last run, especially in race that appears to have plenty of speed to set things up for her. #1 Ashley’s Sassy makes just her second start around two-turns (she was stakes-placed in her other attempt,) and after prepping down the hill in a state-bred stakes last month the daughter of Decarchy seems primed for a major effort. The switch to Prat also is a positive factor and she has enough tactical speed to use her rail post to some advantage. #3 Kiss at Midnight exits a series of much tougher stakes races but her ability to duplicate her best form over a distance of ground is questionable. She’s also trying grass for the first time (sire liked it) while being re-united with Bejarano, so we’ll toss her in. #8 Bert’s Melody got the rust off in a recent downhill turf sprint that should serve as a nice prep for this stretch-out in trip. Blanc knows her well and will have her within striking range throughout.

3rd race: Maiden 3-year-olds sprint five and one-half furlongs in the third race with trainer Bob Baffert finally taking the wraps off #3 Big Red Rocket. This fast, impressive looking son of Summer Bird breezed a furlong in 10 seconds flat (equaling the fastest clocking in the preview session) at the OBS April sale last year and then brought $500,000. His local workouts leading up to his racing debut have been impressive as well, so much so that he’s listed as the 2-1 morning line favorite, though he’ll most likely go considerably lower with the scratching of #5 Journey by Sea. Let’s make him a straight play and rolling exotic single.

4th race: #4 Adair appears ready to earn his diploma in the fourth race, a bottom-rung maiden claiming six furlong sprint. A good second despite a rough start (not noted in the trouble line) in a strong race for the level while more than three clear of the rest in his last start, the Phil D’Amato-trained gelding should produce another forward move and be on or near the lead throughout. Let’s make him a straight play and rolling exotic single.

5th race: Bottom-rung older claimers meet over six furlongs in the fifth race, a treacherous affair loaded with question marks. Best advice is to tread lightly. #3 Tripski, a respectable third vs. $25,000 foes two weeks ago, shows up for $8,000 today, so who knows what kind of shape this David Jacobson-trained gelding is in? He’s very strong in the speed figure department compared to the others, but that’s assuming he has at least one good one left. The other issue is his total lack of tactical speed, which usually is a significant negative at this distance on this track. #5 Bluegrass Sight was re-claimed by trainer Bob Hess in his last race – that’s the good news – but is being dropped from $16,000 to $8,000 to indicate that Hess might not be thrilled with the repurchase. If the Bluegrass Cat gelding is feeling good, he certainly can be tough in this league. #9 Love de Car was a voided claim in a poor run against a similar group in early January but has trained well of late for Kristin Mulhall, retains Gonzalez, and could easily bounce back with a top effort. These are the three we’ll be including in our rolling exotics, but not with any degree of confidence.

6th race: The late Pick-4 begins with the Sensational Star Stakes, a downhill turf sprint for California-bred older horses. It’s a typical grass grab bag with a number of possibilities. #7 Forest Chatter is the poster boy for horse-for-course players – he’s won five of six career starts down the hill – and should be set for another big effort in his first outing since November. The son of Dixie Chatter has fired fresh in the past and the recent workouts indicate he’s fit and ready. #3 Aoteroa was visually quite impressive winning over this course and distance during the autumn season but didn’t show much in a subsequent Del Mar turf sprint that might have been too sharp for him. Freshened since November, the Leonard Powell-trained gelding is good enough to make some serious noise if he’s feeling up to it. #4 Pay the Fine, listed at 20-1 on the morning line, has won two of four lifetime starts over the Santa Anita Hillside course and was extra sharp in his most recent turf sprint at Del Mar last November. The Doug O’Neill-trained gelding must be given a chance to improve his recent dirt performances today given the switch to his preferred surface. #6 McHeat is back sprinting on grass – arguably his favorite conditions – and always represents a dangerous late threat. If you feel the need to spread deeper, #9 Alert Bay and #10 Boozer are among others with solid credentials as well.

7th race: The seventh race is yet another in a string of difficult races, this one for $25,000 claimers at six and one-half furlongs. #3 Basmati always lays his body down and should fire another big shot for Baltas. This is his third consecutive class drop but the veteran gelding remains above his claim level and we suspect he’s simply dropping trying to win. The projected pace scenario seems comfortable and this son of Borrego always has performed best when on or right near the lead. #1 Red Crème is an intriguing Golden Gate Fields shipper now in the David Jacobson barn after being haltered for $25,000 earlier this month. The old gelding has been a synthetic specialist most of his career – his conventional dirt record is 6-1-1-1 – but he should have enough gate zip to gain a favorable striking position despite the rail. Hustling rider Marty Garcia certainly will put him in the race early. #6 Too Fast to Pass continues to sizzle in the morning for Sadler and he’s another genuine and consistent veteran that has to be respected at this level. Include him in rolling exotic play along with #8 Carlot Cowboy, who has that route-to-sprint angle and also remains well above his claim level in a sign of confidence from his connections.

8th race: First-level allowance state-bred fillies and mares meet in the eighth race at six furlongs. We liked the way #7 Madame Mousse graduated in her last start, though the win came down the Hillside course and today she returns to the main track, where she finished a fair-to-respectable fourth in her racing debut last month. We’ll assume that her improvement between her first and second race was due experience and not the switch to grass, so with another forward move today the Mike Machowsky-trained filly seems capable of winning right back. #4 Lakia, an okay third in a similar spot last month, has won three of five lifetime for high percentage trainer Jonathan Wong and should be set for another good effort, while #6 Rosarita, first off the claim for trainer John Brocklebank, won three straight over the Tapeta surface at Golden Gate Fields but has a strong record over conventional dirt (4-1-2-1) as well and has speed figures that make her a fit on this circuit. #9 Alwazabridesmaid is lightly raced, training well, a proven winner over this main track, and adding blinkers for the first time. The Hollendorfer-trained filly switches to Mary Garcia and could easily produce a major forward move. Let’s go four deep in rolling exotic play and hope to get a decent price home.

9th race: The nightcap is another slalom event, this one for 3-year-old maiden special weight 3-year-old fillies. #6 Audacious Angel is a daughter of City Zip trying grass for the first time, and if ever there was an angle demanding an automatic play, this is it. Her main track form isn’t bad – she was beaten a head in a dirt sprint two races back – and if the Eddie Truman-trained filly improves as much on the lawn as most of the City Zip offspring do, she could easily be the one to beat. #11 How Unusual began her racing career in a tough stakes race over this course and distance and actually didn’t run all that badly at 50-1 considering the competition. With that experience behind her and against this much softer group, the daughter of Unusual Heat should be running on strongly late, with Elliott riding her back. #9 Newcomb missed in a photo in her debut sprinting on turf at Laurel in November and makes her first start since for Tom Proctor; the daughter of Giant’s Causeway seems certain to improve with experience and shows a steady if unspectacular work tab for her California debut. All three should be used in rolling exotic play.