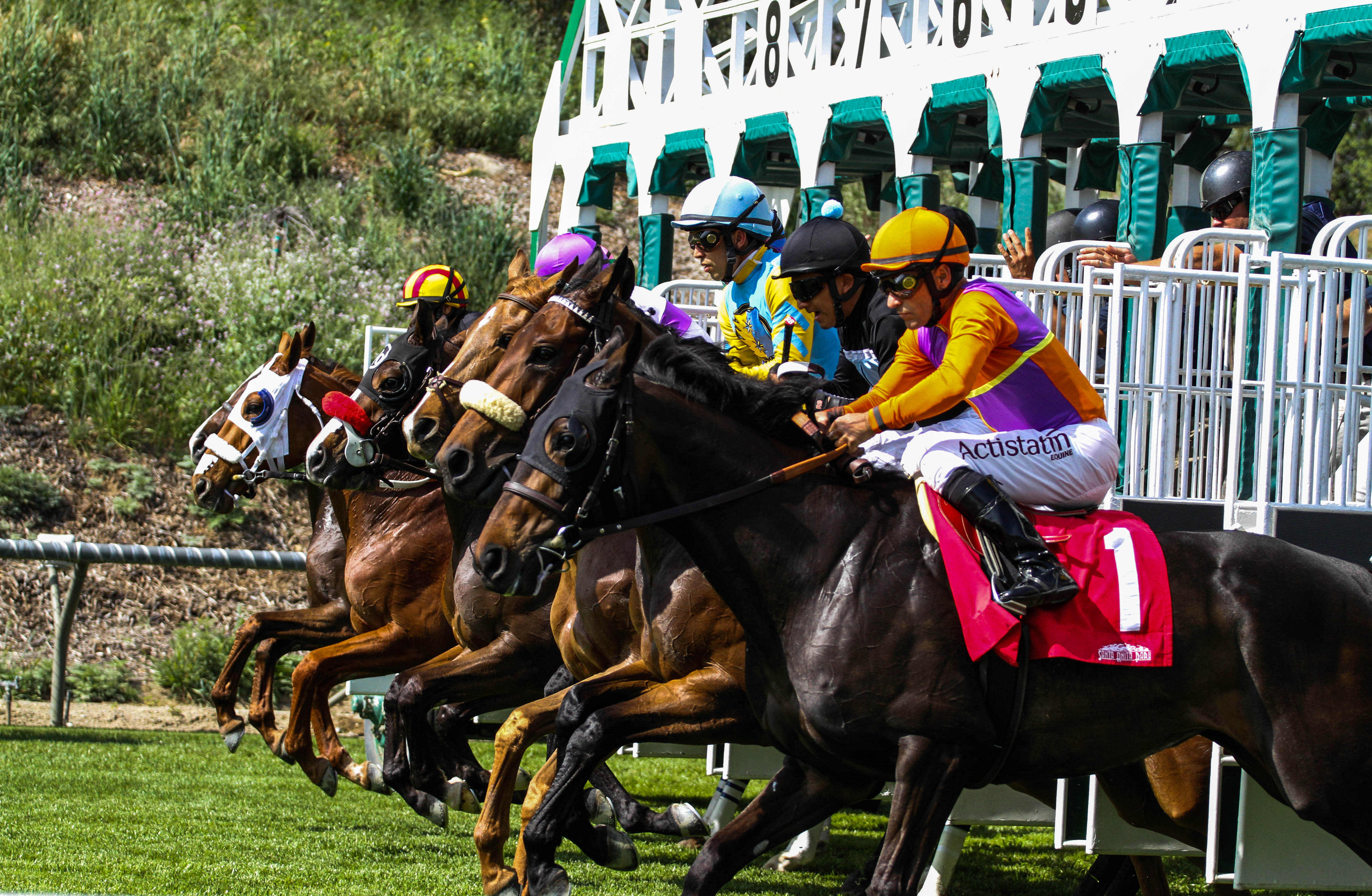 FIRST RACE (1:00 PT) – GRADE: B-
Use: 1-Dissension; 3-Zanbo; 5-Swiss Skimmer
The Friday opener is a contentious $32,000 turf claimer for older fillies and mares. Each of the six entrants has a right to run well but we’ll try to get by using just two. #5 Swiss Skimmer is tough on the front end when not pressured and looks very much like the controlling speed. The daughter of Swiss Yodeler ran well vs. similar opposition up north, has high percentage connections, and has speed figures that match. #3 Zanbo, first or second in six of 14 career starts over the Santa Anita turf course, also ships down from Golden Gate Fields and we’re expecting her to regain her best form after a series of moderate efforts over the all-weather surface. She should be running on late. #1 Dissension (switch to Bejarano),and #4 McBoomer (back at her claim level and stretching out to her favorite distance) are others to consider in rolling exotic play if your budget allows.

SECOND RACE (1:31 PT) – GRADE: B
Use: 3-Raised a Secret; 4-Spirit Rules
Today’s second race features a strong group of five older conditioned allowance sprinters; we’ll use two and hope to survive and advance. #4 Spirit Rules likes this track and knows how to win, so if the veteran Tribal Rule gelding is cranked up and ready to roll in his first start since August he’ll be a major player. The works are good enough for trainer Paul Aguirre and if returns as well as he left he can outrun this field. #3 Raised a Secret has won just one of 12 career starts over the Santa Anita main track but he usually lands in the frame and most recently was a strong runner-up to Sunday Rules in the California Cup Sprint in late January. The Mark Glatt-trained six-year-old has a good stalking style and will be bearing down in the final furlong.

THIRD RACE (2:03 PT) – GRADE: B
Use: 1-Righteous Ruler; 4-Tough It Out
The Pick-6 begins in the third race. #4 Tough It Out should be forwardly placed throughout in a middle distance event that on paper appears to lack early speed, and the Phil D’Amato-trained gelding should have every chance to regain his winning form in a race restricted to state-bred runners. He earned a career top speed figure in his last race, and even if he regresses a bit he’ll be right there, according to the numbers. #1 Righteous Ruler won a visually pleasing abbreviated sprint in his racing debut here last month and today tackles much tougher winners while stretching out. Based on speed figures he appears overmatched, but this Cliff Sise-trained colt seems to have considerable quality and could easily be up to the task. Both should be included in rolling exotic play.

FOURTH RACE (2:33 PT) – GRADE: B+
Use: 2-Ziconic; 3-Magical Mystery; 4-Uninvited
#3 Magical Mystery was given a run in his sprint debut and should get serious today. Always trained and conditioned to be at his best over a distance of ground even before his first outing, the son of Unbridled’s Song gets his chance to show his real stuff today and we’re expecting to see considerable improvement. Garcia has been on him in the morning, knows him well, and should have him within striking range throughout. Baffert’s other starter, #4 Uninvited, earned a career top speed figure when second over this track and distance vs. similar company last month and should be in the fray. This will be his eighth career start so we doubt he has the same upside as his stablemate but still must be included in rolling exotic play. Zenyatta’s son #2 Ziconic closed a huge gap in his debut to finish a promising third, rallying from 15 lengths back to be beaten less than two in the seven furlong sprint. He’ll surely appreciate more ground and should run well again, though we’re thinking he still might be a race or two away from being ready to win. We’ll toss him in, perhaps on a back-up ticket.

FIFTH RACE (3:05 PT) – GRADE: B+
Use: 2-Malko; 5-Dreaming of Gold
#2 Malko ran huge and was best when beaten in a third place performance over a mile and one-half on turf against similar rivals in February and gets a chance to do it right today. The Irish-bred colt was wide without cover every step of the way, yet still managed to hit the front in mid-stretch, only to pay the price close him and be worn down late. The Simon Callaghan-trained import lands a good inside post, and with any kind of ground-saving journey today he should be able to handle this assignment. #5 Dreaming of Gold may be the one to fear most; the son of Unbridled’s Song will race without blinkers while switching to Garcia and figures to be prominent throughout. He’s failed as the favorite in four of last six starts so he may be hard one to trust, but we’ll still use him on at least on a back-up ticket.

SIXTH RACE (3:35 PT) – GRADE: C+
Use: 4-Ubetterreconizeson; 10-Speed Saver; 11-Call Saul
This maiden claiming router for 3-year-olds looks difficult on form and probably requires a significant spread. We’ll go three-deep but not with a great degree of confidence. #10 Speed Saver may be as good as any; with just two prior starts he should have more upside than most of the others and the speed figure he earned his last outing, if repeated today, should be sufficient. The Peter Miller barn has been somewhat cold of late but this Super Saver gelding could help begin a resurgence. Northern California shipper #11 Call Saul gets the worst of the draw, but he’s a first-off-the-claim for Dean Greenman and has numbers up north that fit on this circuit. The son of Comic Strip can be a major contender in this modest spot if he can somehow negotiate a decent trip. #4 Ubettereconizeson, a $30,000 Steve Knapp claim last month, stretches out again and should be prominent throughout. A repeat of his race-before-last, a fairly close fourth place effort two-turning against tougher rivals, makes him worth including.

SEVENTH RACE (4:05 PT) – GRADE: C+
Use: 1-Mr. Cartagena; 6-Ain’t Misbehavin; 8-Foolhardy
Modest claiming milers meet in the seventh race with class dropper #6 Ain’t Misbehavin the logical top pick. With strong and consistent recent speed figures and exiting a much tougher starter’s allowance race, the Phil D’Amato-trained gelding has much in his favor. Three wins in nine career starts over the Santa Anita main track indicates a preference for this surface and with Garcia staying aboard, the son of Elusive Warning should receive the pace prompting trip he prefers. #1 Mr. Cartagena, never worse than second in four career starts, lands the good inside post and should be on or near the lead throughout. He just defeated a restricted (nw-3) $16,000 field earlier this month and is realistically spotted in this $10,000 open claiming affair. #8 Foolhardy looks like the most dangerous of the closers; the veteran gelding remains above his claim level for good trainer Miyadi and should at least get a piece of it.

EIGHTH RACE (4:35 PT) – GRADE: B-
Use: 1-Mr. Sexy; 7-Zuri Chop
#1 Mr. Sexy returns to turf after being denied the opportunity in his last two starts, both of which were switched to the main track due to rain. A two-time winner over this hillside course earlier this season, the son of Unbridled’s Song will be hooking some early speed and won’t get any breathers from his rail post, but with Bejarano staying aboard he looks the best of the front-runners. #7 Zuri Chop was in too tough when chasing Hawkedon home in an optional $40,000 claimer last month; it was his first outing since October and the John Sadler-trained gelding most likely will be fitter and tougher today, especially with the class drop. If the pace comes up faster than par, this French-bred could easily produce the last run.