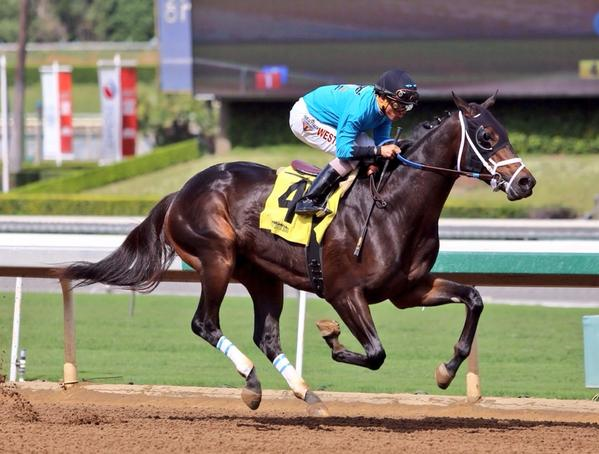 While You Were Away

This drivel is titled ‘While You Were Away,’ but I suppose it really should be called ‘While I Was Away.’ After all, you didn’t go anywhere, did you? I was the one on the move. Traveling. Incommunicado.

Guess it doesn’t matter which one of us was indisposed. Point is we haven’t touched base since a few days before the Belmont Stakes–the exciting, incredibly wonderful Belmont Stakes!

OK, I’m biased. Regular readers of this space know why. Creator, my pick for the Kentucky Derby and again for the Belmont Stakes, won the race and paid $34.80. Right here, days before the Belmont and as an update to Xpressbet’s Free Wager Guide, I outlined three ten-cent superfecta plays keying Creator first, second and third. Each dime super cost $16.80, for a total outlay of $50.40. The initial play with Creator on top hit and returned nearly $1,400 for a dime!

Sunday, the day after the Belmont Stakes, my wife and I flew to London with plans to attend opening day at Royal Ascot on Tuesday. When I arrived across the pond my e-mail box was chock-full of congratulatory messages–mostly from grateful readers that had struck Belmont gold. Cashing a ticket is nice, but what’s even better is hearing success stories from fellow horseplayers who benefitted from the advice!

For most, playing the horses is a solitary enterprise—especially if one watches and wagers online, away from a track or simulcast outlet. It’s basically you against the pari-mutuel world. Mano a mano. Race in, race out. Sure, you might listen to a simulcast host’s analysis, maybe buy a tip sheet, or read someone else’s opinion online at Xpressbet or elsewhere, but when it’s time to put your money on the line…’one’ is the loneliest number.

As a handicapper that often shares his opinions with others things are much different than that because it’s not merely ‘my money’ on the line. Others, presumably, are backing my selections with their hard-earned bread and that’s a huge responsibility.

It’s important to remember that in horse racing ‘Nobody knows nothin.’ Trainers don’t ‘know,’ jocks don’t ‘know’ and experts don’t ‘know.’ Through the years I’ve been around hundreds of so-called insiders and they’re wrong way more often than they’re right. However, sometimes insiders have ideas about what might happen. And, if the price is right, those educated guesses sometimes bear juicy fruit. To me, there’s no better feeling than when I can help fellow horseplayers cash nice tickets.

This was my first trip to Royal Ascot. After watching proceedings on television for years, I finally made the commitment to see it in person. Guess you could call it a ‘bucket list’ item, but that would suggest I’m old enough to have a bucket list. BTW I am, but don’t have one. There’s little else I’m ‘dying’ to do or see. I’m grateful for how fortunate I’ve been and will appreciate whatever new experiences might come my way. Overall, I’m mad stacks ahead in the ‘Main Event.’ been playing with house money for decades. If my final gallop-out is today I won’t have missed out on a thing…including Royal Ascot!

A big part of the Royal Ascot experience is dressing in morning suit and top hat. I rented most of the getup stateside, but had to purchased the hat. That bothered me. When in the world will I ever need to wear a top hat again? Halloween? Probably not. I always miss that because of Breeders’ Cup.

The wife and I rode the train from our London hotel to Ascot Racecourse—about an hour-long trip. The cars were jam-packed packed with nattily dressed gentlemen and ladies ‘going racing.’ During the ride I wondered if I stood out like a sore thumb; if the Brits could tell I was an imposter— a swine in silk stockings–the Yank from South Philly violating hallowed ground. I halfway expected one of the locals to pull me aside, ‘That’s funny, you don’t look British.’

The Mrs. comforted me. Facebook ‘likes’ from an earlier posting of a shot of us in the hotel lobby were multiplying. Though we didn’t sound it, apparently, we at least looked authentic.

Amazingly, on the train to Ascot, we bumped into a former colleague and friend from California. I’ve known him for nearly as long as I’ve been in racing–since Affirmed won the Triple Crown—but don’t see the native New Yorker very often. We excitedly attempted to catch up. In his thick accent he announced to those within earshot, “Go fig-ya. Know the guy fawty years, neva see him at home. Have ta train to Aaaascot to meet him!”

It’s important to get to Ascot early, everyone told me. And they were right. First, you don’t want to miss the Queen’s arrival. Second, it’s critical to have some champagne before the Queen’s arrival. For the first time ever, I bought my wife a ‘bag’ of champagne. Actually, the Vueve Clicquot was inside a bottle, but the bottle was presented in a clear plastic bag, including ice and suitable for convenient transport around the track.

Food and spirits can’t be overlooked at Ascot, especially the latter. There are three…count ‘em…three bars restricted to those bearing coveted Owner/Trainer credentials. In the states I’ve never even seen one track watering hole restricted to owners and trainer. Perhaps owning and training horses across the pond is more stressful than it is in the states, but I doubt it.

Once we made our way trackside we found an exceptional viewing location just to the left of the winning post. From there, I explained to my wife, we would have a perfect view of the final turn and stretch run. I was amazed to find that there were so few attendees in the immediate area. And then it hit me! We weren’t about to witness any stretch duels from where we were located because in Britain they race clockwise or even in a straight line…instead of counter-clockwise, like in the US. We were positioned PAST the finish instead of in front of it. Doh! Talk about your fish out of water. I hadn’t felt that lost at a racetrack since I visited Sha Tin in Hong Kong a few years ago.

No worries. Turns out we had a splendid view of the Queen’s arrival and a fantastic vantage point from which to witness Tepin’s dominating performance in the Group 1 Queen Anne Stakes. How fitting that the first Royal Ascot race I saw live was won by a champion US-based mare!

Brits I spoke to seemed to take the ‘beating’ in stride. However, that whole ‘stiff-upper-lip’ thing conceals a lot. Personally, Tepin’s score swelled this writer’s chest with pride, like it did after she won the 2015 Breeders’ Cup Mile as my best bet at 4.90-1!

Tepin I knew. Most of the other runners on opening day weren’t household names–at least not in my household. Therefore, I relied on selections provided by Geir Stabell at Globeform.com. The website offered a ‘No Cure, No Pay’ guarantee extending through the entire five days of the Ascot meeting. That meant if Globeform picks didn’t show a profit, the package purchase price would be refunded. BTW…they did and it wasn’t.

Throughout the afternoon I was able to say ‘hello’ to some pals, trainer Wes Ward and International riding master Frankie Dettori. It’s amazing to remember that the nearly 6-feet tall over 200-pound Ward was an Eclipse Award winner as the nation’s top apprentice in 1984. As a trainer Ward blazed the trail for US conditioners at Ascot by venturing across the pond and winning races on several previous occasions. Dettori’s winning rides and flying saddle leaps, of course, are legendary. He spent a few seasons in California as a youngster learning his craft from the best in the world. Back then the Santa Anita jock’s room was more like a living, breathing, racing wing of Racing’s Hall of Fame and included residents Bill Shoemaker, Laffit Pincay, Jr., Eddie Delahoussaye, Chris McCarron, Sandy Hawley and more. What a magnificent educational environment for an apprentice jockey! It’s clear Dettori paid close attention.

At one point in the afternoon, after a race, it was announced that Prince Henry of Wales was presenting the winning trophy. My wife and I looked at each other and asked, ‘Who’s Prince Henry of Wales?’ Suddenly it hit my wife and she exclaimed, ‘Prince Henry is Prince Harry!’ She abandoned her chair and rushed to the winner’s enclosure to get a better view of one of the world’s most eligible bachelors.

Her reaction didn’t bother me. A few hours earlier I had purchased her a bag of champagne.

What else could a girl want?