Skip to My Lute (Outside) and Atthecrossroads Worked 4 Furlongs... 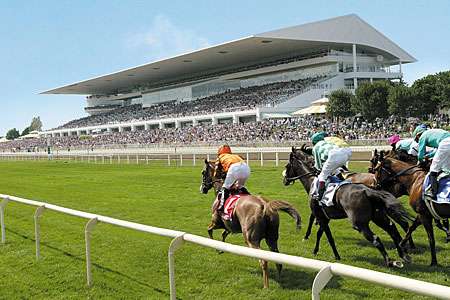 Below is the Pick 4 ticket for Arlington Million Day at Arlington Park on August 13th. As always, the ticket is $20 or less.

Clondaw Warrior (#8, 9-2) beat 20 horses while carrying 159 pounds in his last start. Any horse that can pull that off is a runner, and this nine-year-old pro is as tough as they come. He is very consistent and has faced the toughest competition in the field. He actually shortens up to a mile and 11/16th, so the distance should not be an issue.

Da Big Hoss (#5, 9-5) loves to win races and appears to be in the best form of his life. It remains to be seen if he has been beating much, but he is far too sharp to ignore in this spot. He will likely start at a low price, but he is a deserving favorite based on his last two races.

Montclair (#2, 15-1) is a sneaky price play in this race. This gelding appears to dislike the Inner Turf Course. His two non Inner Turf races resulted in a win and a second. He gets off the Inner Turf today and picks up the services of Mike Smith. New trainer, Roger Brueggemann, the trainer of The Pizza Man, knows a thing or two about winning races at Arlington and the distance appears to be no problem for this stayer.

Billabong (#10, 10-1) is intriguing as he just ran second in a million dollar race in Qatar. He has some nice back class and attracts Flavien Prat to ride. He is a total unknown, but trainer Pascal Bary has had success with shippers in the U.S. before and this horse has won 11 of his 21 races lifetime.

Long Island Sound (#8, 5-2)  ran deceptively well against a tough field in the Belmont Derby. He was further back than usual and never seemed comfortable. His European form is excellent, as he won twice and ran 3rd behind subsequent Group 1 winner Hawkbill. Just like Coolmore and Ballydoyle, it is encouraging to see Aidan O’Brien take another chance with this horse in America.  O’Brien has a very good record in this race and this colt could very well add to his success.

Beach Patrol (#9, 2-1)  looked like one of the most promising three-year-old turf colts before his disappointing effort in the Penn Mile. He followed that poor race up with a fantastic effort in the Grade 1 Belmont Derby, a race in which he was likely best. He steadied early and was very wide throughout. He now makes his third start for Chad Brown, and it appears that the Belmont Derby was a stronger field than this. He needs only a repeat of his last race to win.

Sea Calisi (#13, 7-5) is a deserving favorite in this spot, but she was dealt with the tough 13 post. This filly backed up strong European form with two excellent races at Belmont. As the clear class of the field, Sea Calisi looks primed for a breakout performance in the Beverly D. With that being said, she will be a very low price and will need to work out a trip, so I will include a few other entrants as well.

Ballydoyle (#1, 9-2) has the credentials to win this race, but her last race in the Belmont Oaks was a real head scratcher. If she can bounce back to her victories over top European foes, Minding and Nemoralia, then she will be very tough in here. It is a very positive sign to see her return in this spot for Aidan O’Brien after her disappointing run, indicating that he is still very high on her. Maybe she just hated the Inner Turf at Belmont? Look for her to run first or off the board in the Beverly D.

Coolmore (#6, 6-1) ran very well in the Belmont Oaks even though she was the less touted of O’Brien’s entries. She had the thirteen post and fought every step of the way to be a strong third behind the talented Catch a Glimpse. She must step up against older foes, but a repeat of her last performance puts her square in the mix.

Marypop (#3, 30-1) is the longshot play in this race. She had very good, consistent European form before running 5th in the Modesty Handicap, which looked like nothing more then a prep for this. She adds blinkers, has been working great in the morning and picks up the services of the best turf jockey in the country, Flavien Prat. I think she will outrun all of her Modesty foes and at 30-1, it is worth seeing if she can jump up enough to pull a shocker.

Mondialiste (#9, 8-1) is a completely different animal on left-handed courses. Draw a line through his races on straight and right-handed courses and he would be 8-5 in this race. He won the Grade 1 Woodbine Mile in impressive fashion and ran an extremely strong second to Tepin in the Breeders’ Cup Mile last year. Just when it looked like this horse may be out of form, he snapped back with a strong second behind the talented Time Test at York in his first left-handed race since the Breeders’ Cup. Reading between the lines makes Mondialiste look like an absolute standout in the Arlington Million.