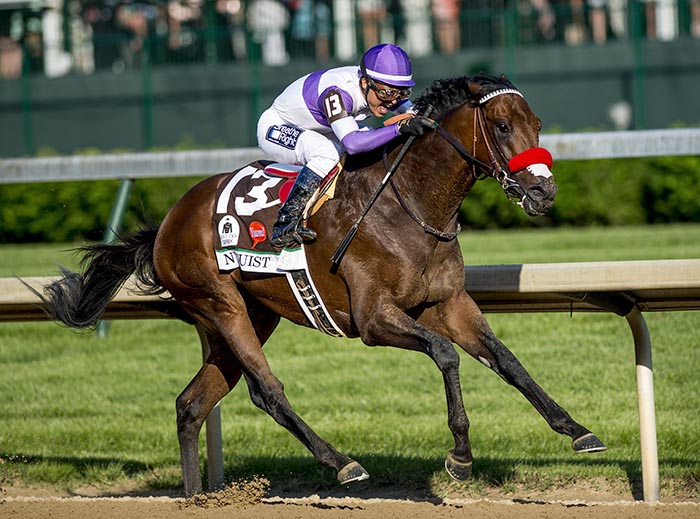 Nyquist dominated Kentucky Derby foes two weeks ago with the kind of speed and determination top class runners often display. It was his eighth win in as many starts and he became just the second 3-year-old, along with Street Sense, to parlay a Breeders’ Cup Juvenile victory into a Kentucky Derby triumph. He will be a heavy favorite to win the Preakness, second leg of the Triple Crown, Saturday—rain or shine.

Below is one man’s humble opinion of each horse and a suggested $100 Wagering Strategy for the race.

1. Cherry Wine, Corey Lanerie, Dale Romans, 20-1
This son of Paddy O’Prado figures to be among an early trailing trio that also should include Exaggerator and Lani. They’ll be hoping for a torrid six furlongs to soften up speed horses. Cherry Wine’s claim to fame is that he closed well in the Grade 1 Blue Grass Stakes, but was passed late for second by My Man Sam. That narrow denial of a better placing kept Cherry Wine out of the Kentucky Derby because he didn’t earn enough qualifying points to start.

Historically, horses denied a birth in the Derby have done pretty well in the Preakness at big odds without winning: Tale of Verve finished second last year at nearly 30-1; Hemingway’s Key was third in ’06, also at nearly 30-1; and Rock Hard Ten was second in ’04. Since 1983, however, the only Preakness winners that skipped the Derby were Red Bullet (2000), Bernardini (2006) and Rachel Alexandra (2009).

Cherry Wine finished fourth in the Rebel Stakes and hopes to join an impressive list of graduates of that race to win the Preakness: American Pharoah (2015), Oxbow (2013), Lookin At Lucky (2010), Curlin (2007), Afleet Alex (2005) and Smarty Jones (2004). Jockey Corey Lanerie is known for riding the rail when possible, so look for this one far back early and then along the pine looking for a sweet path home. He’s improving but doesn’t appear fast enough to win this. An in the money finish at a decent price seems possible.

2. Uncle Lino, Fernando Perez, Gary Sherlock, 20-1
This guy brings some California speed to the Preakness table. Look for him to be on the lead early from this inside post. His hope is to outbreak favored Nyquist, get the lead and then have enough gumption to hold serve over everyone late. Uncle Lino has not been able to finish in front of Exaggerator in two previous meetings so one might wonder why the tables ought to turn between these two Saturday. However, if you like this guy, go ahead and wager on him. You’ll probably get a run for your money…at least into the turn.

3. Nyquist, Mario Gutierrez, Doug O’Neill, 3-5
He’s the heavy favorite and if they ran this race 10 times, he’d probably win eight of them. His versatile running style makes him dangerous and his workmanlike attitude seals the deal. It’s impossible for frontrunners to out-foot him and closers can’t catch him. Once the gates open things don’t always go as planned, so there’s a chance he might not win the Preakness. He could stumble, get bumped or blocked on the rail. It happens. However, aside from an unpredictable catastrophe, Sunday morning Nyquist figures to be headed to Belmont with a Triple Crown on the line.

4. Awesome Speed, Jevian Toledo, Alan Goldberg, 30-1
This son of Awesome Again has some speed, but, so far, it hasn’t been that ‘awesome.’ He will be challenged to make the lead early and up against it to close with enthusiasm. He was placed first via disqualification in the Federico Tessio at Laurel last out, so he got a free ride into Preakness. While the ride may be ‘free,’ if figures to also be ‘bumpy’ against this level of competition.

5. Exaggerator, Kent Desormeaux, Keith Desormeaux, 3-1
The Kentucky Derby runner-up to Nyquist figures as a popular second choice behind that conqueror. The Santa Anita Derby hero closes from well off the pace and ought to benefit from an expected early hot pace like he saw in Louisville. However, those contemplating wagering on this guy to win or on top in exotics must explain how Saturday’s outcome will differ from the four—count ‘em F-O-U-R—previous times he has finished behind Nyquist!

Some believe he will move up over an ‘off’ track and that makes sense, but how will he move up enough to overhaul a very consistent nemesis. We don’t believe the Preakness finish will be a carbon copy of the Derby ending. We do think Nyquist will win the race, so we’re looking for another runner to complete the exacta at better odds. Our reasoning is simple: a Nyquist over Exaggerator exacta will be incredibly boring and it’s going to be difficult for Exaggerator to fire another big bullet after romping in Arcadia and then just missing in Louisville. Let’s root for some other horse at bigger odds to claim second in the Preakness.

6. Lani, Yutaka, Take Mikio Matsunaga, 30-1
The US-bred, Japan-raced winner of the UAE Derby ran okay in the Kentucky Derby. He certainly was fit for the race after an unusual Louisville training regime that saw him log more miles around the oval than the tractors. He might duplicate his Derby performance in Baltimore, but that still won’t be enough to get him home in the money. We’ll pass.

7. Collected, Javier Castellano, Bob Baffert, 10-1
This guy’s trainer is a superstar. So is his jockey. The jury’s still out on him, though. He’s won his last two races with style—the most recent a four-length jog in the Grade 3 Lexington Stakes. His running style will find him close to the early leaders, waiting for an opportunity to pounce. When Nyquist makes his move to the lead watch this guy also start to motor. Will his engine be big enough to pull off an upset? Probably not. Go ahead and use him underneath, if you like, especially if he’s near the 10-1 morning line. He still has plenty to prove on the track, but his connections are worth using at a decent price.

8. Laoban, Florent Geroux, Eric Guillot, 30-1
This 3-year-old colt has never won a race! That’s not for a lack of trying, however. He’s faced some pretty stiff competition this season, including two Grade 3 fields and a Grade 1 tussle. And he hasn’t been disgraced in any of those encounters. He’s a speed horse that likely will force the pace early and make anyone with designs on collaring him go faster than they probably want to. Nyquist can catch him, but Laoban just might hang on for a slim slice at a nice price. Keep him around at a big number. It should be noted that Collected bested him going a mile at Santa Anita and Cherry Wine out-finished him last out in the Blue Grass.

9. Abiding Star, J.D. Acosta, Ed Allard, 30-1
It’s difficult for this horseplayer to make a case for this horse in this race, although he is five-for-five this season. Those races were not against this level of competition. Plus, Abiding Star is a speed horse in a race with an assortment of those types. Pass.

10. Fellowship, Jose Lezcano, Mark Casse, 30-1
Last out, Fellowship made his first start for trainer Mark Casse since being switched from trainer Stan Gold. Fellowship finished third in that race, the Pat Day Mile at Churchill Downs. He probably will need to exceed his best race to have any say in this outcome. His outside post position probably won’t help him because he doesn’t have much speed and consequently might be forced wide on the turns. Don’t see him being a major factor in here.

11. Stradavari, John Velazquez, Todd Pletcher, 8-1
Trainer Todd Pletcher doesn’t really like to run horses in the Preakness Stakes. Why? Don’t know. Maybe he doesn’t like eating crab cakes. Stradavari, however, is a bit different than the usual Pletcher post-Derby Preakness possible. Stradavari did not run in the Kentucky Derby and, in fact, has made just three lifetime starts. His first out, going seven furlongs at Aqueduct, apparently found him short of top condition. We accept that excuse because next out he demolished a Gulfstream maiden field by more than 11 lengths. Then he walloped a first-level allowance group at Keeneland by more than 14 lengths. Based on those two races we could be dealing with a serious racehorse. And Todd Pletcher knows what to do with a serious racehorse. However, we’re going to wager that, as impressive as Stradavari’s triumphs have been, they’ve been artificially enhanced because they’ve come against much weaker foes. He won’t be able to duplicate that dominance against fiercer rivals, especially breaking from post 11 and possibly running over an ‘off’ track. We don’t like him as a Preakness ‘win’ candidate, but, if he’s for real, he might hit the board.

Strictly One To Beat
3- Nyquist

On Track with Johnny D: Is it Safe?