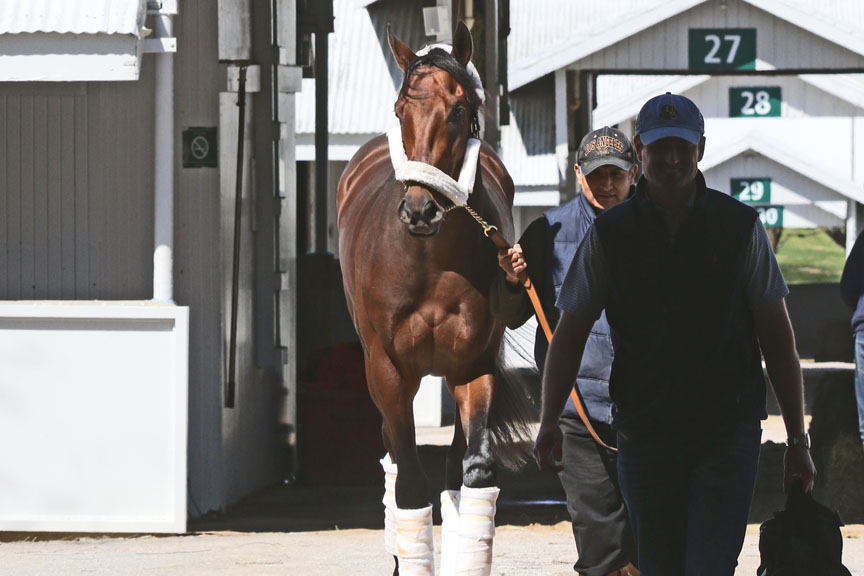 The Triple Crown is on ice. Frozen solid. Nyquist’s defeat Saturday at Pimlico guaranteed that and I’m OK with it. Truthfully, I wasn’t emotionally prepared to witness another Kentucky Derby, Preakness and Belmont Stakes sweep this year.

Granted, if Nyquist had turned the trick I would have been suitably impressed. Winning a Triple Crown is one of the most difficult achievements in all of sport. However, and this is totally unfair to Nyquist and his connections, a back-to-back sweep couldn’t possibly have equaled the popularity of American Pharoah’s stirring victory one year ago.

Why? Because before last June it had been 37 years since a horse had won a Triple Crown! When American Pharoah roared home victorious at Belmont Park decades of pent-up, near-miss frustration and a plaguing fear that we might never see another Triple Crown winner were washed away like Original Sin.

Despite Nyquist’s amazing accomplishments (unbeaten BC Juvenile winner, 2-Year-Old Champ), had the colt won the Triple Crown grown men would not have been moved to tears like they were in 2015. And that’s not Nyquist’s fault. Under the scenario, he would have done everything asked of him; won every race he ran. However, timing is everything. By definition, grown men don’t often cry and just last year they had blubbered.

With a Triple Crown bid on ice, we now can turn our undivided attention toward dissecting the Belmont Stakes.

Not so fast backstretch breath! First, we have some housekeeping to do.

You may have heard that last Saturday they ran the Preakness at Pimlico and that it was an exciting event. That’s true, particularly for a pal of mine who had failed to cash a ticket Friday and Saturday before successfully unloading on Exaggerator at 5/2 odds to break even for the weekend! You won’t find that wagering strategy outlined in any of Steve Crist’s tomes. And it’s not recommended for the faint of heart or the slim of wallet, but it worked for him…this time.

The rest of us found the race entertaining for a variety of other reasons:

On paper the Preakness appeared as a two-horse race between Nyquist and Exaggerator. Stradivari had some folks hoping he was the next Secretariat, but that was more ‘sky’ than ‘pie.’ Early Saturday afternoon, at Laurel Park, one player made an aggressive $80,000 win wager on Stradivari. Displaying Preakness odds based solely on Maryland handle, at one point, Pimlico in-house television monitors, actually showed Stradivari favored over Nyquist. Why, in the first place, Pimlico monitors would show Preakness odds based solely on Maryland wagers is anyone’s guess.

By Preakness post time, predicted rain had turned the track into a muddy mess and it was a widely held pre-race assumption that the nasty conditions would favor Exaggerator’s chances. Consensus also anticipated that the mud wouldn’t particularly affect Nyquist either way. After the race, both theories seemingly were proven accurate.

Another popular pre-race assumption pointed to the presence of an abundance of front-running types. That observation supported a theory that Nyquist might have to be rated behind early speedsters or compromised while fighting for the lead.

As it turned out, California invader Uncle Lino, breaking just inside Nyquist, provided plenty of early zip, and Awesome Speed, just outside of Nyquist, also showed some quickness. Jockey Mario Gutierrez hustled Nyquist away from the gate, an understandable tactic in order to maintain a strong early position and to avoid catching a wave of slop, but the strategy may ultimately have backfired.

Whether it was the loud sound of hooves splashing over an ‘off’ surface, the cool temperature, a primal urge to outrun Uncle Lino or a reaction to the competitive presence of Awesome Speed, Nyquist, for the first time in his career, ignored his rider’s instructions and didn’t relax until the field was racing down the backside. By then the damage already had been done.

Forcing the fastest Preakness first quarter ever (:22 1/5) broiled Nyquist as golden brown as a Maryland crab cake. When Exaggerator came calling, the needle was on E. To his esteemed credit, Nyquist never, ever gave up and, at one point after he had shifted lanes to the outside of Exaggerator, actually appeared to re-rally with one final last grasp toward the brass ring.

Nyquist’s stature suffered not at all in defeat. Even though he will be forced to miss the Belmont Stakes, hopefully, we will see him again later at his best. He’s a really good horse and has earned the respect of this veteran horseplayer.

Exaggerator, who benefitted from his kind of track and pace in the Preakness, is quality. He now has two wins and two seconds in Grade I races on his resume, including Preakness and Santa Anita Derby titles. He also dismissed a monkey from his back by defeating Nyquist for the first time after four previous failures.

Trainer Keith Desormeaux, a relatively fresh face to racing’s marquee events, has done a fantastic job in developing and maintaining Exaggerator. The colt appeared a prodigy when he broke his maiden last July at Del Mar in his second start and then shipped cross-country next out to win the Saratoga Special. Through 11 starts, at six different tracks, Desormeaux has kept Exaggerator racing at a high level, steadily improving almost with each outing.

Contributing to the Exaggerator cause has been Keith’s brother, Hall of Fame jockey Kent Desormeaux, who’s been aboard Exaggerator in nine of 11 starts. Kent rode a masterful race in the Preakness, venturing to go where no jock had gone before—near the rail in the Pimlico slop. Reportedly, in the pre-Preakness warm up, the jock had sampled the inside going and had found it to be acceptable. Kent’s piloting of Exaggerator along the rail until the stretch drive in the Kentucky Derby also was a thing of beauty. The ride didn’t draw much positive notice because the colt finished second, but Desormeaux’s undisputable talent was on display.

Ironically, on the heels of a hot Kentucky Derby pace and a record-setting Preakness first quarter, at this writing, the Belmont Stakes field seems incredibly void of pacesetters. Understandably, the mile and one-half distance is a serious hurdle for many, but statistics remind that front-runners or pace pressers do very well in the race. That in mind, expect the Belmont startling lineup to expand in the next week as owners and trainers evaluate their chances of possibly pilfering the third leg of the Triple Crown.

We’ll get to that discussion more in the coming weeks. What’s certain now is that the Triple Crown is on ice, at least for another year. And I’m OK with that.