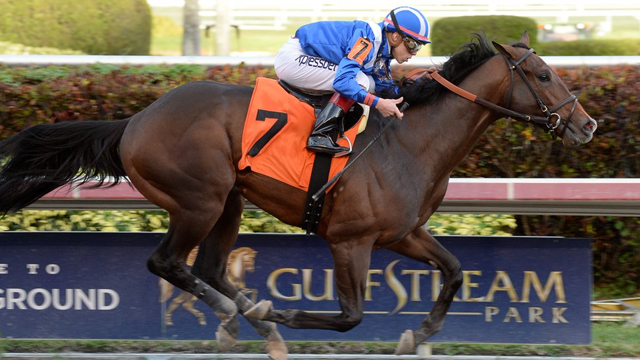 Life is getting hard, I am currently watching standard bred action from some place called ABY. I have taken a punt on the 5 at 17-1 ….and they are off . I’m in the pocket , no good ~ Sweden apparently with an Irish female race caller. Bravo!
Ok lets get serious, fabulous 12 race card on Saturday at Gulfstream Park. I will try and highlight a few races that intrigue me. GOOD LUCK

#2 Noble Maria ~ TOP PICK ~ Comes in for a small outfit and a layoff since July last year. Works, while not jumping off the page time wise, visually look actually very good . PRICE plus the fact her numbers are more than enough to win here.

#5 Gray’s Fable ~TOP PICK ~ gets back on the green stuff, his 81 Beyer towers above the rest of these here, added to the fact Golden Tacit, the winner of that race, has come back since to win. Gets off the fence and has a solid work tab.

#7 Ghost on a Mission ~ gets on the lawn for the first time, by Champion Ghostzapper who yields 14% grass winners, this guy’s Dam Truly Mari did her best work on Arlington’s all-weather track. Sure looks like he has improved while working on the grass.
Workout: https://www.xbtv.com/video/ghost-on-a-mission-(outside)-and-holy-emperor-worked-4-furlongs-in/ghost-on-a-mission-outside-and-holy-emperor-worked-4-furlongs-in-49-00-at-palm-meadows-on-april-4th-2020/

#9 Palace Kitten ran a big race in last and was claimed out of that by a trainer who is 25% off the claim. Has speed

No real opinion in here but I’m going to throw in, #3 Poppys Destiny. This colt is coming in off a massive layoff since Oct 2018. He did however break his maiden at first asking at Saratoga, is stakes placed and get a break in the weights. Work tab is excellent, we have a work on XBTV all the way back in Feb, but it clearly shows he’s fit and ready and that was 2 months ago. Works since have been good too ~ Hoping for a PRICE. Also include #4 War Act.

#10 Lexatoga ~ is an interesting first timer for Shug. Son of honor code has been working up a storm on the turf at Payson Park. Shug 1st out stats on turf are not bad at all, 16%. We do have a work from June of last year from the gate on this guy with Stanhope who has broken his maiden since. The ability is there.
Workout: https://www.xbtv.com/video/stanhope-(outside)-and-lexatoga-worked-4-furlongs-in/stanhope-outside-and-lexatoga-worked-4-furlongs-in-49-77-at-belmont-park-on-june-30th-2019/

#5 Always Shopping ~  G2 winner out of the stakes winning Turfer Stopshoppingmaria toys turf for the first time. Looks like she will love it. Comes in with a steady series of works including a turf work. She will be very tough even off the long layoff.
Workout: https://www.xbtv.com/video/always-shopping-(outside)-and-philly-special-worked-4-furlongs-in/always-shopping-outside-and-philly-special-worked-4-furlongs-in-49-10-at-palm-beach-downs-on-march-14th-2020/

#1 Like You ~ solid win in last plus a career high Beyer.

#2 Miss Auramet ~TOP PICK  ~ love her last race as she won with plenty in the tank. She comes in with a nice work March 27, while she does wear an extension blinker and appears to lean out slightly around the turn, she’s as straight as a string down the lane. She has speed, the rails are at 108 feet so perhaps her not so power steering will be no problem.