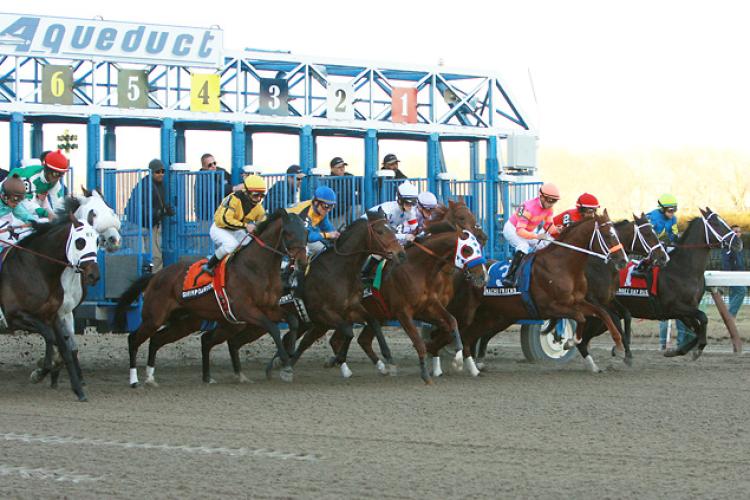 The flip side of a “productive” or “key” race is what might be termed an “unproductive” race, one in which the participants don’t do well when they make their next start. Last year’s Grade II Remsen Stakes at Aqueduct would seem to be a good example. Thus far, the starters in the Remsen last Nov. 26 have had a poor record going forward from that 1 1/8-mile race.

The 2016 Remsen participants have made 10 subsequent starts combined, with just one win and one second. Moreover, most of the Remsen starters were soundly beaten next-time out.

Here is a horse-by-horse look at what the 2016 Remsen participants have done since that race:

–No Dozing (second in the Remsen): Finished sixth, beaten by 10 1/2 lengths, in the Grade III Sam F. Davis Stakes at Tampa Bay Downs on Feb. 11.

–Takaful (third in the Remsen): Finished seventh, beaten by 39 1/2 lengths, in the Grade III Jerome Stakes at Aqueduct on Jan. 2.

–Win With Pride (fourth in the Remsen): Finished fourth, beaten by 12 1/2 lengths, in the Grade III Jerome Stakes at Aqueduct on Jan. 2.

–You’re to Blame (fifth in the Remsen): Won a seven-furlong allowance/optional claiming race by three-quarters of a length at Parx on Feb. 11.

–Tale of Silence (sixth in the Remsen): Finished seventh, beaten by 6 3/4 lengths, in a seven-furlong allowance/optional claiming race at Gulfstream Park on Jan. 6. Then finished second, beaten by seven lengths, in a 6 1/2-furlong allowance/optional claiming race at Gulfstream on Feb. 12.

–Hookup (eighth in the Remsen): Has not started since.

–Newman (ninth in the Remsen): Was eased in a one-mile maiden race at Gulfstream on Feb. 18.

–Lead Astray (10th in the Remsen): Has not started since.

Jeremy Plonk had some interesting thoughts regarding the Remsen in the Feb. 24 edition of Countdown to the Crown.

“The Remsen traditionally has been overblown by handicappers and pundits alike — this one included,” Plonk wrote. “The villains at play aren’t the horses themselves, but rather our interpretation of what a Remsen win means. Realistically, this November NYRA event comes after the Breeders’ Cup has watered down the division’s best a month prior. It’s also late in the year when other 2-year-olds are put away for a slight winter break before the run-up at Gulfstream. And, its 9-furlong distance is so far beyond the scope of most of the field at that stage of their careers that it’s truly a race of haves and have nots. The survivor wins.”

Plonk pointed out that no Remsen winner has any victories in one of the Triple Crown races since Thunder Gulch captured the Kentucky Derby and Belmont Stakes in 1995. Not only that, but Plonk noted that the second-place finish by Bluegrass Cat in both the Kentucky Derby and Belmont in 2006 are the only one-two-three finishes in a Triple Crown event since Thunder Gulch.

On the basis of Mo Town’s 2 1/2-length Remsen victory, he was sent away as the 3-2 favorite in last Saturday’s Risen Star in New Orleans. After racing second through the early stages, he weakened when the real test came and finished a well-beaten fifth.

Girvin, fifth early, rallied to win the Risen Star at 8-1 by two lengths in 1:43.08 for trainer Joe Sharp. The Kentucky-bred Tale of Ekati colt, splendidly ridden by Brian Hernandez Jr., now is two for two when racing on the dirt. He won a six-furlong maiden contest on the dirt Dec. 16 at the Fair Grounds in his debut, then ran second in the Keith Gee Memorial at about one mile on the turf there Feb. 4.

No. 1 Irish War Cry and No. 8 Gunnevera are entered in this Saturday’s Grade II Xpressbet.com Fountain of Youth Stakes at Gulfstream. The 1 1/16-mile affair also has attracted multiple Grade I winner Practical Joke, who will be making his 2017 debut.

Irish War Cry and Gunnevera finished one-two in Gulfstream’s 1 1/16-mile Holy Bull Stakes at 1 1/16 miles on Feb. 4. Practical Joke won the Grade I Hopeful Stakes at Saratoga in September and Grade I Champagne Stakes at Belmont Park in October before finishing third in the Grade I Breeders’ Cup Juvenile at Santa Anita Park on Nov. 5.

I am becoming more and more impressed by what I am seeing from Irish War Cry, who goes into the Fountain of Youth undefeated in three career starts. The New Jersey-bred Curlin colt, who won the Holy Bull with authority by 3 3/4 lengths, had a five-furlong drill last Saturday at Palm Meadows. I watched the video of that workout and thought Irish War Cry looked absolutely terrific. Daily Racing Form’s Michael Vesce praised the workout when he tweeted: “Irish War Cry rated nicely in 13.40, 37.60, drew off by 3 in 1:01.80, and out huge 113.40, 127.80. Very prof. 2/tons of energy.”

No. 2 McCraken, who is undefeated in four career starts following his win in the Grade III Sam F. Davis Stakes at Tampa Bay on Feb. 11, has had a setback in the form of an ankle strain.

However, all was not good with the Kentucky-bred Ghostzapper colt when Wilkes noticed the colt “was a little off” Tuesday morning. Wilkes discovered a problem with the colt’s left front ankle.

X-rays were taken and they were “clean,” Wilkes said to McGee. “So that’s good. But I just want to give him a little time for the ankle to flatten down. We’ll use poultice and ice and everything and see how he does, and hopefully he’ll get back to the track soon enough.”

An abscess in Eclipse Award winner Classic Empire’s right front foot knocked him out of this Saturday’s Fountain of Youth. As I wrote last week concerning Classic Empire, the way I see it, any hiccup at this time of the year is cause for concern vis-à-vis the May 6 Kentucky Derby. And now McCraken finds himself in the same boat as Classic Empire in that regard.

The “All Others” option closed as the 5-1 favorite when wagering in Pool Three of the 2017 Kentucky Derby Future Wager (KDFW) closed last Sunday. One of the reasons for the price on “All Others” ultimately being favored was the Risen Star win by Girvin. In terms of individual horses, McCraken ended up being the 6-1 favorite.

Here are the final odds for Pool Three of the 2017 KDFW:

There is only one Kentucky Oaks Future Wager, which also closed last Sunday, with rising star Unique Bella an overwhelming favorite at even money. Here are those final odds:

Jim Penney, one of the most successful trainers in the history of racing in the Pacific Northwest, died on Feb. 22 at his home in Edgewood, Wash. He was 82.

Penney had been in ill health for several months before his situation deteriorated in the final days before his death, according to his son-in-law, former jockey Bryson Cooper, who won the 1977 Longacres Mile aboard the Penney-trained Theologist. Penney, who wore a pacemaker and was diabetic, had been in and out of hospice care.

“Luckily he didn’t suffer,” Cooper was quoted as saying in an Emerald Downs press release. “His body just shut down.”

Penney first became a licensed trainer in 1954. His initial stakes victory came in the 1957 British Columbia Handicap at Longacres with Cold Command.

Cold Command was a beautifully-bred son of War Admiral and Monsoon. War Admiral won the Triple Crown in 1937. Monsoon won the 1946 Correction Handicap in New York and 1947 Santa Margarita Handicap at Santa Anita. Monsoon was a daughter of 1936 Epsom Derby winner Mahmoud.

Originally owned by the renowned C.V. Whitney, Cold Command finished ninth in the 1952 Kentucky Derby. The Penney family later purchased Cold Command privately to not only race him in the Northwest, but also to stand him at stud at Penney Farms in Washington.

The year before I started working for the Daily Racing Form, I attended the 1973 Longacres Mile as a fan. The Longacres Mile is by far the richest and most important race in the Northwest.

I was standing in the crowd by the finish line when Penney won his first Longacres Mile in 1973 with Silver Mallet, who earlier in the year had finished third to Riva Ridge at Aqueduct. In 1972 at the Big A, Silver Mallet had defeated Onion, who is famous for winning the 1973 Whitney Handicap at Saratoga when upsetting mighty Secretariat.

I first met Penney at Yakima Meadows in 1975, my first full year with the Racing Form. One of the earliest columns I wrote for the Racing Form was about Penney.

I have seen Penney from time to time at Santa Anita in recent years. The last time I saw him, I handed him my 1973 Racing Form from the day he won his first Longacres Mile with Silver Mallet. As he began to look at that Racing Form, a big smile appeared on his face. He looked at it with the enthusiasm of a child opening a birthday present.

Penney took particular delight in winning the 1973 Longacres Mile because of who finished second, Pataha Prince. Penney had trained Pataha Prince from the start of his racing career in 1967 until the summer of 1973. In 1967, Pataha Prince won the biggest race in the Northwest for 2-year-olds, the Washington Futurity (now the Gottstein Futurity).

On June 23, 1973, a brash young trainer by the name of Bobby Frankel claimed Pataha Prince off Penney for $16,000 at Hollywood Park. Even though Pataha Prince was up there in age that summer as an 8-year-old, he proved to be one of the many shrewd Frankel claims in those days.

In Pataha Prince’s first start for Frankel, the Strong Ruler gelding won an allowance race on the turf July 25 at Del Mar. After Pataha Prince ran second in a six-furlong allowance contest on the dirt Aug. 3 at Del Mar, he won the six-furlong Bing Crosby Handicap on the dirt Aug. 11 at Del Mar (with Bill Shoemaker aboard) in 1:08 flat, just a fifth of a second off the track record. Frankel then sent the razor-sharp Pataha Prince to the Northwest to run in the Longacres Mile.

With a sixteenth to go in the ’73 Longacres Mile, it looked like Pataha Prince and jockey Alvaro Pineda were on their way to victory. But Silver Mallet rallied under Longacres riding star Larry Pierce to win by a neck in 1:34 flat to tie the track record set the year before by Red Wind. Pataha Prince had to settle for second.

At Longacres in 1968, Penney became the first trainer to win five races on one card at a Washington track. Remarkably, in 1998, he again won five races on a card as a trainer, this time at Emerald Downs.

Penney, who won a total 2,154 races, was one of the original inductees into the Washington Racing Hall of Fame in 2003. It was deserving honor, to be sure, for a wonderful man who truly was a giant among trainers in the Pacific Northwest.

On Track with Johnny D: Fountain of Truth