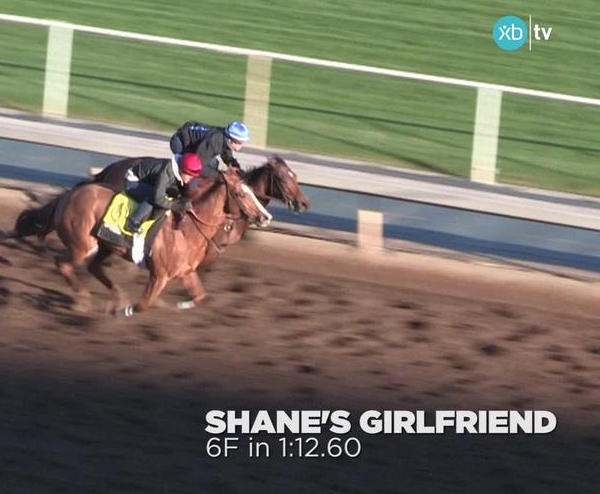 Honorable Duty (#7, 8-1) won the local prep for this and has a recency edge over many of his key rivals in this race. His victory in the Tenacious Stakes was his first race as a gelding and his first start without blinkers since his debut. He is three for three lifetime at the distance and looks like a horse on the rise that should be tough to beat at a square price.

December Seven (#3, 8-1) is the only horse in this race that can match the upside of Honorable Duty. He is also perfect at the distance, gets in light at 114 pounds and has won his last two starts with authority. This colt could be any kind and like Honorable Duty, has run within the last two months. Eagle, Mo Tom and International Star all come off extended layoffs and may be a race away.

Shane’s Girlfriend (#3, 3-1) should be long gone in the Rachel Alexandra Stakes. She won her first two races by a combined 19 lengths and actually went off favorite against Unique Bella in her last start. She was pressed in-between horses in a three-way speed duel and understandably tired late. Unique Bella is in an area code of her own and would be 2/5 in the Risen Star later in the day if she ran, never mind this race. The horse that ran second in her last start, It Tiz Well, is a future stakes winner as well. Look for Shane’s Girlfriend to get back on track in a big way here.

Oscar Nominated (#9, 7-2) was much closer to the pace than he usually is last time out due to the slow fractions that he encountered. He gets a pass for hanging because of the unfavorable scenario he was placed in and is the class of the field. He seems to relish Fair Grounds’ sod and is the horse to key in exotics in this race. With that being said, he is far from a cinch in this wide-open affair.

Enterprising (#6, 6-1) has shown great consistency since joining the Michael Maker barn and ran well to be second to the well-meant Our Way last time out at Gulfstream Park. His best efforts are good enough to win this and he should be one of the horses right there on the line in a blanket finish.

Western Reserve (#8, 7-2) has run back-to-back bang up races over Fair Ground’s turf course. He has been no worse than 3rd in 8 straight races and will try to take this field wire-to-wire. When will all of these hard races take a toll on this horse?

Granny’s Kitten (#5, 3-1) looks almost identical to Western Reserve. They have taken turns beating each other at Fair Grounds and more often then not, this honest horse shows up with a solid effort. The extra sixteenth of a mile that he gets in this race may be to his advantage.

Greengrassofyoming (#2, 4-1) finished between Western Reserve and Granny’s Kitten two starts back when the three rivals where separated by a head. He makes his third start off of a layoff and could be sitting on a peak effort as one of Maker’s four entrants in here.

Local Hero  (#3, 4-1) stretched out to two turns for the first time and won with authority in a race that has proven to be live. Going from a maiden to a stakes is a big step up, but this colt appears to have a ton of upside and could be a future star. He is the unknown quantity in a race full of horses that appear to be good, but not great.

Girvin  (#1, 6-1) like Local Hero, may not have found his ceiling yet. He was very game in his debut on dirt while beating the very talented Excitations. Excitations was 9 lengths clear of the third place finisher and returned to win with ease for Al Stall. Girvin followed that win with a strong second in a turf stakes while trying a route for the first time. He has paired up 87 beyers in his two starts and will not need to improve by much to win this race.

Guest Suite  (#6, 6-1) has done absolutely nothing wrong in his young career and is the most established horse in the field. He may not have the upside of Local Hero or Girvin, but he has two wins at the distance, one win over the track and a style that puts him in any race.

Shareholder Suite  (#5, 15-1) could be a bit of a reach, but at 15-1, he is worth including as a value play. His two races without blinkers have been his best yet and he only missed second in the Le Comte by a length despite encountering a fair bit of trouble.