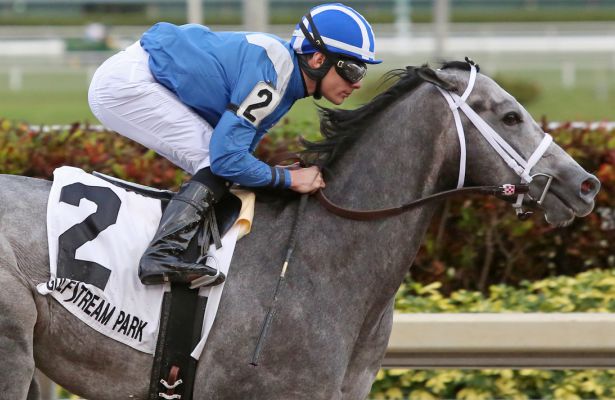 Despite the thermometer’s somewhat effective protest–currently displaying a frosty 23 degrees–spring is in the air. How do I know? Because there’s no surer sign of spring’s imminent arrival than that distinctive crack when bat meets ball. We heard that welcome sound just yesterday as the hometown nine lost its initial Grapefruit League test.

Additional proof that spring is in the offing is the annual renewal of the Fountain of Youth Stakes at Gulfstream Park, which transpired Saturday. While not the major sophomore prize of that track’s Championship Season—that would be the Florida Derby, April 2—the Fountain of Youth serves as a decent line in the sand between winter’s final desperate gasp and spring’s blustery arrival.

Of course, those in Hallandale, Florida to attend the event were oblivious to seasonality. There the sun was warm and bright, an ocean breeze gently curtsied and the temperature hugged 76 degrees.

Neither winter nor spring was an accurate label. ‘Perfect’ seemed to fit.

Also ‘perfect’ on the afternoon was Mohaymen, again, that unbeaten, untied and un-scored upon grey/roan son of Tapit. We got a first-hand, close-up look at the beast in the Gulfstream paddock and he appeared as sleek and as fit as a panther poised to pounce. Turning for home in the Fountain of Youth, ‘pounce’ he did on lightly seasoned Zulu, ultimately dispatching that foe while under a hand ride to the finish. The rest in the field hardly mattered.

Months ago, trainer Kiaran McLaughlin described Mohaymen as smart, talented, agile and light-bodied. Saturday, those adjectives clearly still hit the mark. When McLaughlin spoke of the colt in January, he spun the colt’s leanness as a positive that would translate to handiness in a bulky Louisville field of 20.

That theory apparently will be tested come the first Saturday in May. Before then, however, the unstoppable force must meet the immovable object—undefeated Mohaymen versus unbeaten Nyquist in the Florida Derby. Except for mad stacks, including a possible $1 million winner’s bonus to Nyquist’s posse, and pre-Kentucky Derby bragging rights, in the larger picture neither victory nor defeat ought to matter to either. If healthy, both colts figure to load into the Louisville gate at contender’s odds for what could be a much-ballyhooed rematch for all the marbles.

Strangely, Mohaymen and Nyquist, both with unblemished records—the former five-for-five and the latter six-for-six—have not received a level of credit commensurate with their accomplishments. While one or the other tops most 3-year-old rankings, neither has developed a rabid fan base. Why? Is it because neither colt has shattered the Beyer Speed Figure sound barrier? Is it because fans don’t believe a modern day horse can carry an unblemished record from two to three and into the Kentucky Derby winner’s circle?

Yes and yes. And there are more questions, most of which currently are unanswerable. Has Mohaymen whipped a 3-year-old of consequence? Maybe not. By Tapit, how will he handle a mile and one-quarter? Who knows? Can Nyquist outrun any horse not trained by Keith Desormeaux (Swipe was second to Nyquist an incredible four consecutive times and Exaggerator once)? He beat the rest of those fields. And will Uncle Mo’s red-hot bloodline carry Nyquist’s speed and talent the Derby distance? Again, who knows?

In a strange way, sentiment toward Mohaymen and Nyquist as they approach the Kentucky Derby is comparable to how many voters regard Hillary Clinton’s Presidential bid…they don’t love her, but they think she’s lengths better than anyone else in the field.

Since yours truly is fortunate to have spent many formative racing seasons in the daily company of all-time greats Chris McCarron, Laffit Pincay, Jr. and Don Pierce and has hustled book for Jose Santos (briefly) and Sandy Hawley (six years), it was wonderful to see them all together again. Angel Cordero, Pat Day, Jacinto Vasquez and Jorge Velasquez are familiar faces and contemporaries of those previously mentioned. Jockeys Bobby Ussery, Manny Ycaza, Walter Blum and John Rotz represented a time before this writer’s arrival on the track.

As those 13 Hall of Fame jockeys occupied center stage and responded to HRRN personality and program host Mike Penna’s prompts by spinning well-worn yarns that somehow seemed as fresh as when they first were told, we wondered how often those fellows had beaten everyone else home. The answer was easy to compute. Fortuitously, earlier that afternoon, we had purchased a box of Jockeys Guild/PDJF branded collector cards. It didn’t take long to tally win totals from the back of each corresponding card.

That’s an incredible number of victories–almost too many to comprehend. That the tally landed squarely on 71,900 forced us to initiate an ‘inquiry’ and a recount. The result was ‘no change.’

At one point in the afternoon’s program, as many of the game’s greatest living riders occupied the stage along with five permanently disabled brethren, we couldn’t help wondering what the legends must be thinking.

‘There but for the grace of God,’ had to be a common notion. Or, perhaps, one or two thanked a lucky star, a rabbit’s foot or a charmed horseshoe.

Better than anyone in the ballroom those legends of the saddle clearly understand the occupation’s inherent danger. To have tumbled often as part of a swirling thousand pound plus concoction of human and equine muscle, bone, hair and flesh…as they all had more than once…and to have walked—‘walked’ being the operative word—away and survived in the saddle for decades…that takes….well, exactly what we don’t know.

No one knows why things happen like they do. And that’s why Hall of Fame riding greats congregate on their own dime each year to raise money for permanently disabled jockeys. In their hearts, they realize it so very easily could have been one of them.